There remains the entire systemic circulation that must be considered before total analysis of cardiac regulation can be achieved.

1.       Right atrial pressure, which exerts a backward forceon the veins to impede flow of blood from the veins into the right atrium.

3.       Resistance to blood flow between the peripheralvessels and the right atrium.

These factors can all be expressed quantitatively by the venous return curve, as we explain in the next sections. 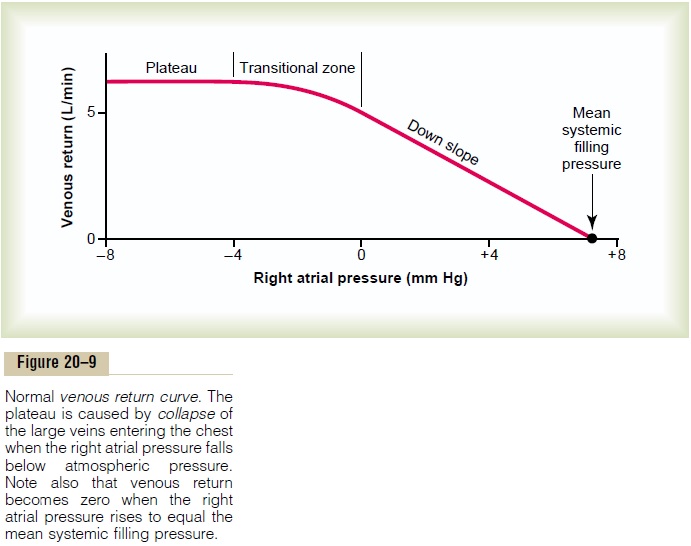 At the same time that the right atrial pressure is rising and causing venous stasis, pumping by the heart also approaches zero because of decreasing venous return. Both the arterial and the venous pressures come to equilibrium when all flow in the systemic circulation ceases at a pressure of 7 mm Hg, which, by definition, is the mean systemic filling pressure (Psf). Conversely, complete inhibition of the sympathetic nervous system relaxes both the blood vessels and the heart, decreasing the mean circulatory filling pressure from the normal value of 7 mm Hg down to about 4 mm Hg. Before leaving Figure 20–10, note specifically how steep the curves are. This means that even slight changes in blood volume or slight changes in the capacity of the system caused by various levels of sympathetic activity can have large effects on the mean circulatory filling pressure. 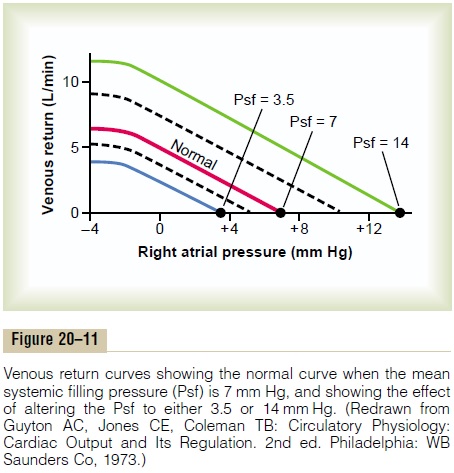 Conversely, the lower the mean systemic filling pressure, the more the curve shifts downward and to the left.

Why is venous resistance so important in determin-ing the resistance to venous return? The answer is that when the resistance in the veins increases, blood begins to be dammed up, mainly in the veins themselves. But the venous pressure rises very little because the veins are highly distensible. Therefore, this rise in venous pressure is not very effective in overcoming the resist-ance, and blood flow into the right atrium decreases drastically. Conversely, when arteriolar and small artery resistances increase, blood accumulates in the arteries, which have a capacitance only 1/30 as great as that of the veins. Therefore, even slight accumulation of blood in the arteries raises the pressure greatly—30 times as much as in the veins—and this high pressure does over-come much of the increased resistance. Mathematically, it turns out that about two thirds of the so-called “resist-ance to venous return” is determined by venous resist-ance, and about one third by the arteriolar and small artery resistance.

Venous return can be calculated by the following formula: 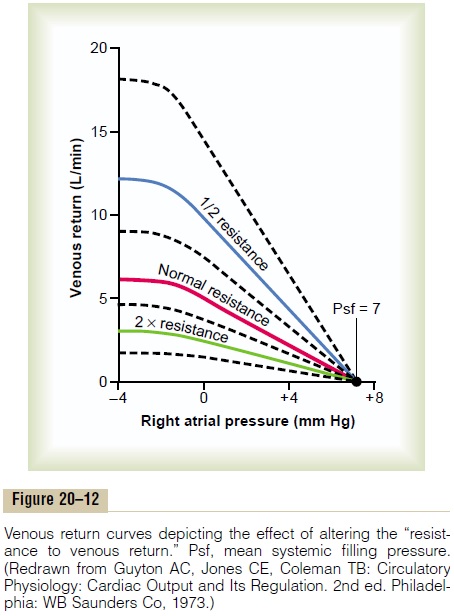 Note also that when the right atrial pressure rises to equal the mean systemic filling pressure, venous return becomes zero at all levels of resistance to venous return because when there is no pressure gradient to cause flow of blood, it makes no difference what the resistance is in the circulation; the flow is still zero. Therefore, thehighest level to which the right atrial pressure can rise,regardless of how much the heart might fail, is equal to the mean systemic filling pressure. 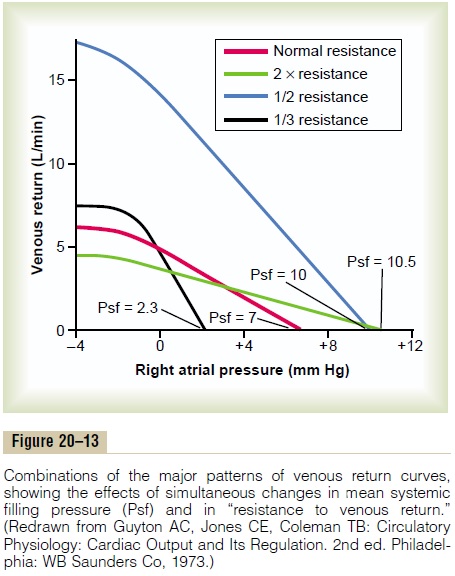 Combinations of Venous Return Curve Patterns. Figure 20–13shows effects on the venous return curve caused by simultaneous changes in mean systemic pressure (Psf) and resistance to venous return, demonstrating that both these factors can operate simultaneously.