The left side of Figure 20–6 identifies conditions that commonly cause cardiac outputs higher than normal.

The left side of Figure 20–6 identifies conditions that commonly cause cardiac outputs higher than normal. One of the distinguishing features of these conditions is that they all result from chronically reduced total periph-eral resistance. None of them result from excessiveexcitation of the heart itself, which we will explain sub-sequently. For the present, let us look at some of the conditions that can decrease the peripheral resistance and at the same time increase the cardiac output to above normal. 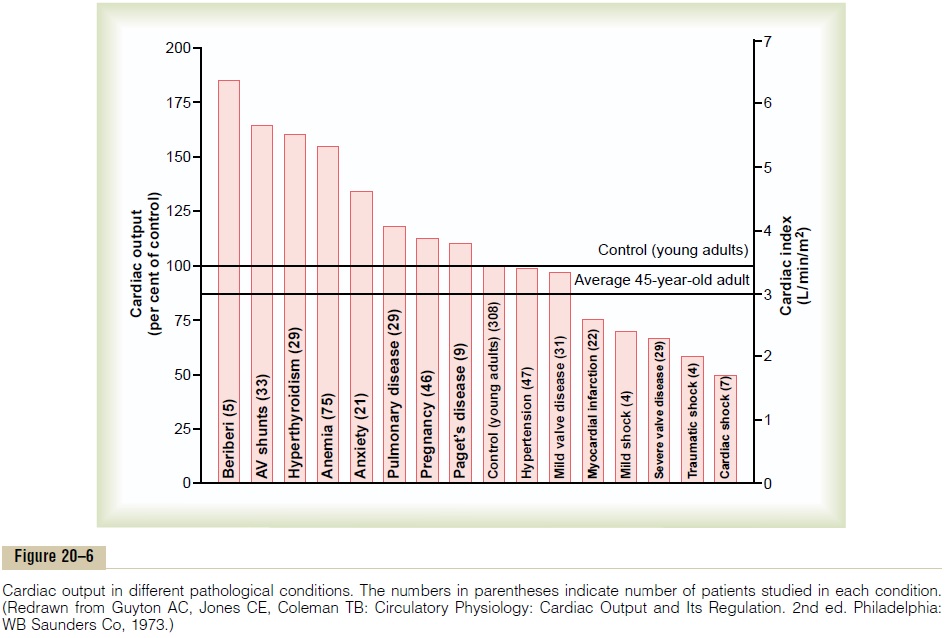 1.       Beriberi. This disease is caused by insufficientquantity of the vitamin thiamine (vitamin B1) in the diet. Lack of this vitamin causes diminished ability of the tissues to use some cellular nutrients, and the local tissue blood flow mechanisms in turn cause marked compensatory peripheral vasodilation. Sometimes the total peripheral resistance decreases to as little as one-half normal. Consequently, the long-term levels of venous return and cardiac output also often increase to twice normal.

2.       Arteriovenous fistula (shunt). Earlier, we pointedout that whenever a fistula (also called an AV shunt) occurs between a major artery and a major vein, tremendous amounts of blood flow directly from the artery into the vein. This, too, greatly decreases the total peripheral resistance and, likewise, increases the venous return and cardiac output.

3.       Hyperthyroidism. In hyperthyroidism, themetabolism of most tissues of the body becomes greatly increased. Oxygen usage increases, and vasodilator products are released from the tissues. Therefore, the total peripheral resistance decreases markedly because of the local tissue blood flow control reactions throughout the body; consequently, the venous return and cardiac output often increase to 40 to 80 per cent above normal.

4.     Anemia. In anemia, two peripheral effects greatlydecrease the total peripheral resistance. One of these is reduced viscosity of the blood, resulting from the decreased concentration of red blood cells.