For the most purposes ultraviolet or UV of the spectrum shortest wavelengths are practical for remote sensing. This wavelength beyond the violet portion of the visible wavelengths hence it name. Some earth surface materials primarly rocks and materials are emit visible radiation when illuminated by UV radiation.

The light which our eyes - our "remote sensors" - can detect is part of the visible spectrum. It is important to recognize how small the visible portion is relative to the rest of the spectrum. There is a lot of radiation around us which is"invisible" to our eyes, but can be

Blue, green, and red are the primary colours or wavelengths of the visible spectrum. Theyare defined as such because no single primary colour can be created from the other two, but all other colours can be formed by combining blue, green, and red in various proportions. Although we see sunlight as a uniform or homogeneous colour, it is actually composed of various wavelengths of radiation in primarily the ultraviolet, visible and infrared portions of the spectrum. The visible portion of this radiation can be shown in its component colours when sunlight is passed through a prism, which bends the light in differing amounts according to wavelength.

The next portion of the spectrum of interest is the infrared (IR) region which covers the wavelength range from approximately 0.7 ?m to 100 ?m more than 100 times as wide as the

visible  portion.  The  infrared  can  be  divided  into  3  categories  based  on  their  radiation

The reflected near IR covers wavelengths from approximately 0.7 ?m to 1.3 ?m is

The middle-infrared region includes energy with a wavelength of 1.3 to 3.0 ?m.

The thermal IR region is quite different than the visible and reflected IR portions, as

this energy is essentially the radiation that is emitted from the Earth's surface in the form of heat. The thermal IR covers wavelengths from approximately 3.0 ?m to 100 ?m.

This wavelength (or frequency) interval in the electromagnetic spectrum is commonly referred to as a band, channel or region.The major subdivision 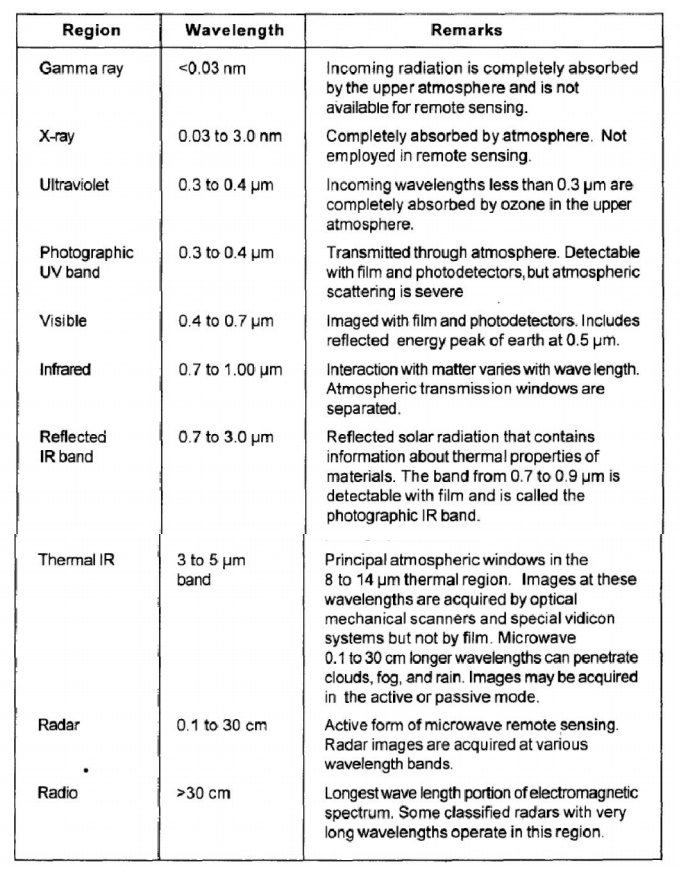