Visible/ultra violet spectroscopy is useful in the analysis of extended con-jugated systems. Absorption of vis/uv radiation results in the promotion of electrons from low electronic levels to higher ones.

Visible/ultra violet spectroscopy is useful in the analysis of extended con-jugated systems. Absorption of vis/uv radiation results in the promotion of electrons from low electronic levels to higher ones.

Vis-uv spectroscopy is useful in the analysis of unsaturated molecules such as conjugated alkenes and involves the measurement of electronic transi-tions from the highest occupied molecular orbital to the lowest unoccupied molecular orbital (π−π*). If a heteroatom is present in the conjugated system n-π* transitions are possible as well as π−π* transitions.

The theoretical value for λmax can be calculated using tables which quantify the effects of extra conjugation and substituents for a particular parent sys-tem. This can be compared versus the observed λmax to help confirm a pro-posed structure or to choose between different possible structures.

Visible/ultra violet spectroscopy is one of the oldest forms of spectroscopy, but its use in identifying the structure of organic compounds has waned with the advent of more recent spectroscopic techniques. Nevertheless, vis-uv spectroscopy can still be a worthwhile tool for the organic chemist, especially in the structural analysis of organic  molecules  which  contain  extended  conjugated  systems.  This  typically occurs when functional groups such as alkenes, ketones, aldehydes, carboxylic acids, esters and aromatic rings are in conjugation with other unsaturated systems. When electromagnetic radiation in the visible-uv region is absorbed by a mole- cule, the energy absorbed excites electrons from low electronic levels to higher ones. For that reason, visible and UV spectra are often called electronic spectra.

The easiest transition involves the promotion of an electron from the highest occupied molecular orbital (HOMO) to the lowest unoccupied molecular orbital (LUMO). We described the formation of two molecular orbitals for the hydrogen molecule – a bonding (σ) MO of lower energy and an antibonding (σ∗) MO of higher energy. In a hydrogen molecule both electrons fill the σ MO resulting in stabilization. An electronic transition would involve promoting one of the electrons in the σ MO to the σ∗ MO. The energy required for this transition is too great to be measured in the vis-uv spectrum. This is also true for the σ-bonds present in organic molecules which means that vis-uv spectroscopy cannot be used to analyze saturated organic molecules.

However, vis-UV spectroscopy is useful in the analysis of unsaturated com-pounds – compounds that contain π-bonds. When two half filled p orbitals form a π bond, two molecular orbitals are formed – a more stable bonding π MO and a less stable antibonding π* MO (Fig. 1). Both electrons occupy the bonding π MO and this becomes the HOMO (since it is less stable than any of the σ-MO’s present in the molecule). The antibonding π* MO remains unoccupied and becomes the LUMO. 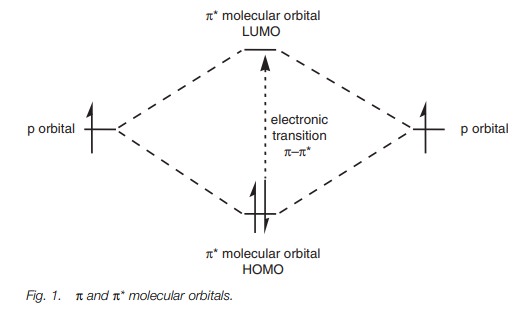 The easiest and least energetic electronic transition is the promotion of one of the electrons from the π MO to the π* MO. The energy separation between the MO and the π* MO is less than that between aσ MO and a σ* MO, but for a sim-ple alkene this corresponds to a wavelength of less than 200 nm which is still too energetic for the vis-uv spectrum.

When it comes to conjugated systems, the energy difference between the HUMO and LUMO is greatly reduced allowing electronic transitions to occur in the vis-uv region. We saw that it was possible for the two π-orbitals in conjugated dienes to interact with each other. This interaction can result in modified molecular orbitals as shown in Fig. 2. The two π orbitals of the isolated alkenes interact to give two new π orbitals π1 and π2 for the diene. A similar process takes place with the antibonding orbitals with the result that the energy difference between the HOMO and LUMO is reduced. For example, the λmax for ethene is 171 nm whereas it is 217 nm for 1,3-butadiene. (Remember that a higher wavelength means a lower energy.) 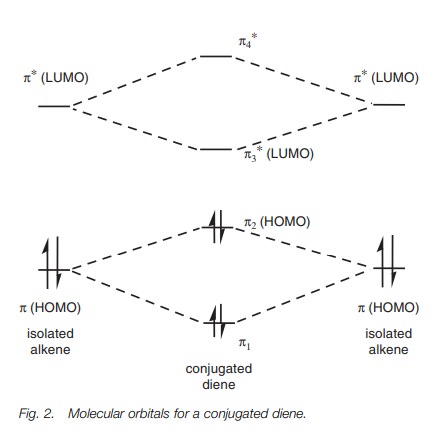 As the amount of conjugation increases, the energy difference between the HOMO and the LUMO decreases until the difference is small enough for transitions to occur in the visible region – resulting in a colored compound.

For example, β-carotene (Fig. 3) is the precursor for Vitamin A and is responsible for the orange color in carrots. It has an absorption maximum of 497 nm which corre-sponds to blue-green. Since this is the light that is absorbed, the color observed is what remains (i.e. red-orange).

The absorbance will change depending on the wavelength of light used and so a spectrum is produced measuring wavelength (in nm) versus absorbance. There may be one or several broad absorption peaks in the spectrum. The wavelength at which the absorption is a maximum for any of these peaks is called λmax  and is reported for the compound. The strength of the absorption at this point is quanti- fied by a term known as the molar absorptivity (ε), which is related to absorbance (A), the concentration of the sample (C) and the length (l) in centimeters of the cell containing the sample. The units of ε are M−1cm−1.

Knowing λmax and ε for a particular compound means that it is possible to mea- sure the concentration of a sample if the absorbance of a solution is measured at λmax. The ability to quantify concentrations using vis-uv spectroscopy is important in the analysis of mixtures using a technique known as high performance liquid chromatography (hplc). In this procedure, mixtures are passed down a column and  exit  the  column  at  different  rates.  The  compounds  can  be  detected  and quantified by passing them through a vis-uv spectrometer as they come off the column.

The λmax for an absorption related to a particular electronic transition depends on the extent of conjugation in the molecule and also the types of substituent which might be present. The predicted value for λmax can be calculated using tables that quantify these effects for a particular parent system, e.g. the table for conjugated dienes is shown in Fig. 4. 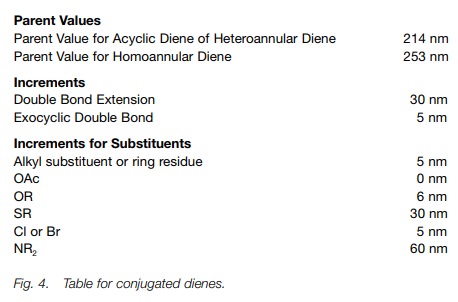 The predicted λmax for the triene in Fig. 5 is calculated as follows. The parent sys-tem is the conjugated diene (214 nm). There is one extra double bond in conjuga-tion with the diene which means adding an extra 30 nm for double bond extension. There are also substituents attached to the triene system – three methyl groups worth 5 nm each, and one methoxy group worth 6 nm. This gives a predicted λmax of 265 nm.

A comparison of the predicted λmax versus the observed λmax can be used as sup-porting evidence for a proposed structure. It can also be useful in choosing between two or more likely structures for a test compound. Separate tables are available for α,β-unsaturated aldehydes and ketones, α,β-unsaturated acids and esters, and benzene derivatives.