Ventilation is usually measured as the sum of all exhaled gas volumes in 1 min (minute ventilation, or V ).

Ventilation is usually measured as the sum of all exhaled gas volumes in 1 min (minute ventilation, or V ).

For the average adult at rest, minute ventilation is about 5 L/min.

Not all of the inspired gas mixture reaches alve-oli; some of it remains in the airways and is exhaled without being exchanged with alveolar gases. The part of the Vt not participating in alveolar gas exchange is •known as dead space (Vd). Alveolar ventilation ( Va) is the volume of inspired gases actu-ally taking part in gas exchange in 1 min. 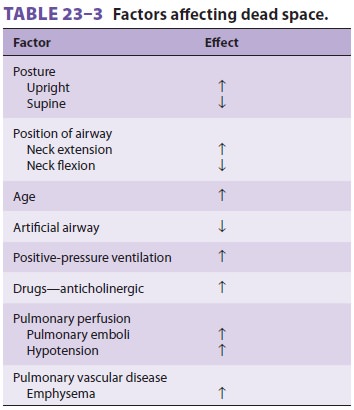 alveoli that are not perfused (alveolar dead space). The sum of the two components is referred to as physiological dead space. In the upright position,dead space is normally about 150 mL for most adults (approximately 2 mL/kg) and is nearly all anatomic. The weight of an individual in pounds is roughly equivalent to dead space in milliliters. Dead space can be affected by a variety of factors ( Table 23–3).

Because Vt in the average adult is approxi-mately 450 mL (6 mL/kg), Vd/Vt is normally 33%. This ratio can be derived by the Bohr equation:

where Paco2 is the alveolar CO2 tension and Peco2 is the mixed expired CO2 tension. This equation is useful clinically if arterial CO 2 tension (Paco 2) is used to approximate the alveolar concentration and the CO2 tension in expired air gases is the average measured over several minutes.

Regardless of body position, alveolar ventila-tion is unevenly distributed in the lungs. The right lung receives more ventilation than the left lung 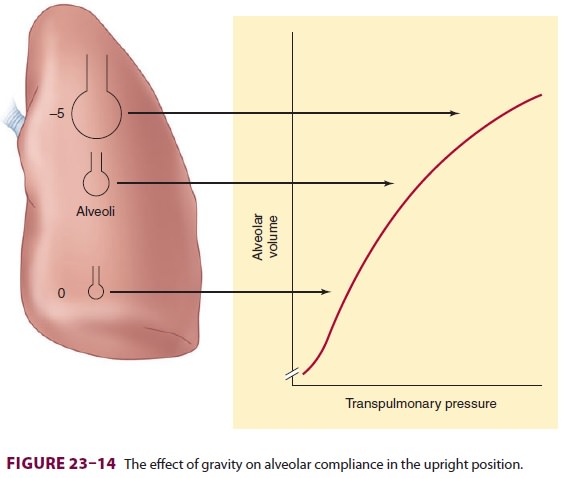 (53% vs 47%), and the lower (dependent) areas of both lungs tend to be better ventilated than do the upper areas because of a gravitationally induced gra-dient in intrapleural pressure (transpulmonary pres-sure). Pleural pressure decreases about 1 cm H2O (becomes less negative) per 3-cm decrease in lung height. This difference places alveoli from different areas at different points on the pulmonary com-pliance curve (Figure 23–14). Because of a higher transpulmonary pressure, alveoli in upper lung areas are near-maximally inflated and relatively noncom-pliant, and they undergo little expansion during inspiration. In contrast, the smaller alveoli in depen-dent areas have a lower transpulmonary pressure, are more compliant, and undergo greater expansion during inspiration.

Lung inflation can be described mathematically by the time constant,

Regional variations in resistance or compliance not only interfere with alveolar filling but can cause asynchrony in alveolar filling during inspiration; some alveolar units may continue to fill as others empty.

Variations in time constants within the normal lung can be demonstrated in normal individuals breathing spontaneously during abnormally high respiratory rates. Rapid shallow breathing reverses the normal distribution of ventilation, preferentially favoring upper (nondependent) areas of the lung over the lower areas.

Of the approximately 5 L/min of blood flowing through the lungs, only about 70–100 mL at any one time are within the pulmonary capillaries undergo-ing gas exchange. At the alveolar–capillary mem-brane, this small volume forms a 50–100 m2-sheet of blood approximately one red cell thick. Moreover, to ensure optimal gas exchange, each capillary perfuses more than one alveolus.

Local factors are more important than the autonomic system in influencing pulmonaryvascular tone (above). Hypoxia is a powerful stimu-lus for pulmonary vasoconstriction (the opposite of its systemic effect). Both pulmonary arterial (mixed venous) and alveolar hypoxia induce vasoconstric-tion, but the latter is a more powerful stimulus. This response seems to be due to either the direct effect of hypoxia on the pulmonary vasculature or increased production of leukotrienes relative to vasodilatory prostaglandins. Inhibition of nitric oxide production may also play a role. Hypoxic pulmonary vasocon-striction is an important physiological mechanism in reducing intrapulmonary shunting and prevent-ing hypoxemia . Hyperoxia has little effect on the pulmonary circulation in normal indi-viduals. Hypercapnia and acidosis have a constrictor effect, whereas hypocapnia causes pulmonary vaso-dilation, the opposite of what occurs in the systemic circulation.

Pulmonary blood flow is also not uniform. Regardless of body position, lower (dependent) areas of the lung receive greater blood flow than upper (nondependent) areas. This pattern is the result of a gravitational gradient of 1 cm H 2O/cm lung height. The normally low pressures in the pulmonary circu-lation allow gravity to exert a significant influence on blood flow. Also, in vivo perfusion scanning in normal individuals has shown an “onion-like” layer-ing distribution of perfusion, with reduced flow at the periphery of the lung and increased perfusion toward the hilum. 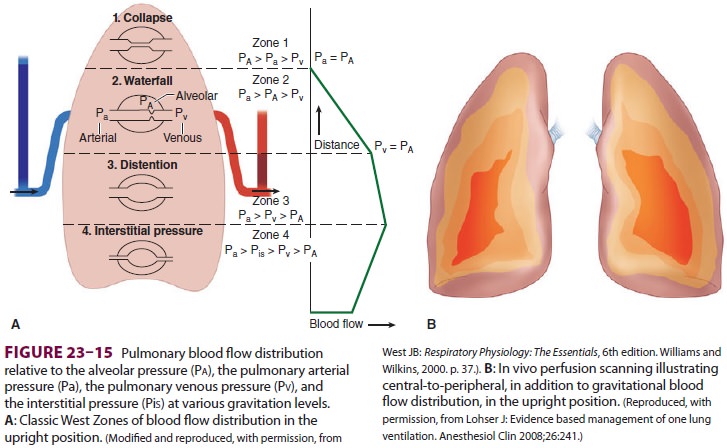 Because alveolar ventilation (Va) is normally•about 4 L/min, and pulmonary capillary perfusion (Q) is 5 L/min, the overall V/Q ratio is about0.8. V/Q for individual lung units (each alveolus and its capillary) can range from 0 (no ventilation) to infinity (no perfusion); the former is referred to as intrapulmonary shunt, whereas the latter constitutes alveolar dead space. V/Q normally ranges between 0.3 and 3.0; the majority of lung areas, however, are close to 1.0 (Figure 23–16A). Because perfusion increases at a greater rate than ventilation, nondependent (apical) areas tend to have higher V/Q ratios than do dependent (basal) areas ( Figure 23–16B).The importance of V/Q ratios relates to the efficiency with which lung units resaturate venous blood with O 2 and eliminate CO2. Pulmonary venous blood (the effluent) from areas with lowV/Q ratios has a low O2tension and high CO2ten-sion—similar to systemic mixed venous blood.Blood from these units tends to depress arterial O2 tension and elevate arterial CO 2 tension. Their effect on arterial O2 tension is much more profound than that on CO2 tension; in fact, arterial CO 2 tension often decreases from a hypoxemia-induced reflex increase in alveolar ventilation. An appreciable com-pensatory increase in O uptake cannot take place in remaining areas where V/Q is normal, because pulmonary end-capillary blood is usually already maximally saturated with O2 . 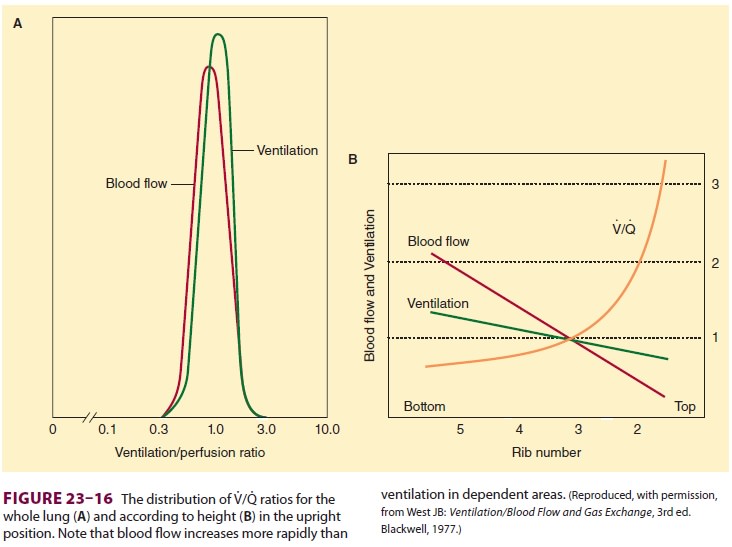 Shunting denotes the process whereby desat-urated, mixed venous blood from the rightheart returns to the left heart without being resat-urated with O2 in the lungs (Figure 23–17). The overall effect of shunting is to decrease (dilute) arte-rial O 2 content; this type of shunt is referred to as right-to-left. Left-to-right shunts (in the absence of 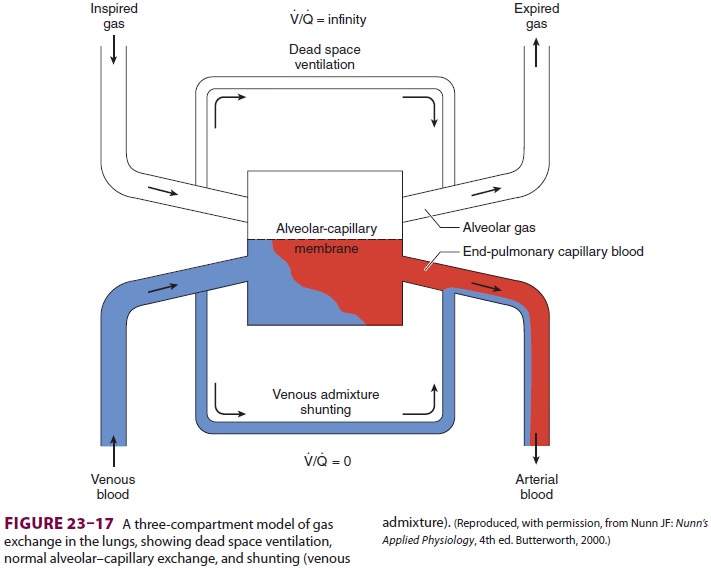 pulmonary congestion), however, do not produce hypoxemia.

Intrapulmonary shunts are often classified as absolute or relative. Absolute shunt refers to anatomic shunts and lung units where V/Q is zero. A relative shunt is an area of the lung with a low V/Q ratio. Clinically, hypoxemia from a relative shunt can usually be partially corrected by increasing the inspired O 2 concentration; hypoxemia caused by an absolute shunt cannot.

(Qs/Qt ). The equation for Qs/Qt may be derived with the law for the conservation of mass for O2 across the pulmonary bed: 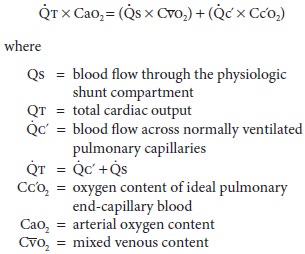 The simplified equation is

The formula for calculating the O 2 content of blood is given below.

Qs/Qt can be calculated clinically by obtainingmixed venous and arterial blood gas measurements; the former requires a pulmonary artery catheter. The alveolar gas equation is used to derive pulmo-nary end-capillary O 2 tension. Pulmonary capillary blood is usually assumed to be 100% saturated for an Fio2≥ 0.21.

The calculated venous admixture assumes that all shunting is intrapulmonary and due to absolute shunts (V/Q= 0). In reality, neither is ever the case; nonetheless, the concept is useful clinically. Normal Qs/Qt is primarily due to communication betweendeep bronchial veins and pulmonary veins, the the besian circulation in the heart, and areas of low V/Q in the lungs (Figure 23–18). The venous admixture in normal individuals (physiological shunt) is typi-cally less than 5%. 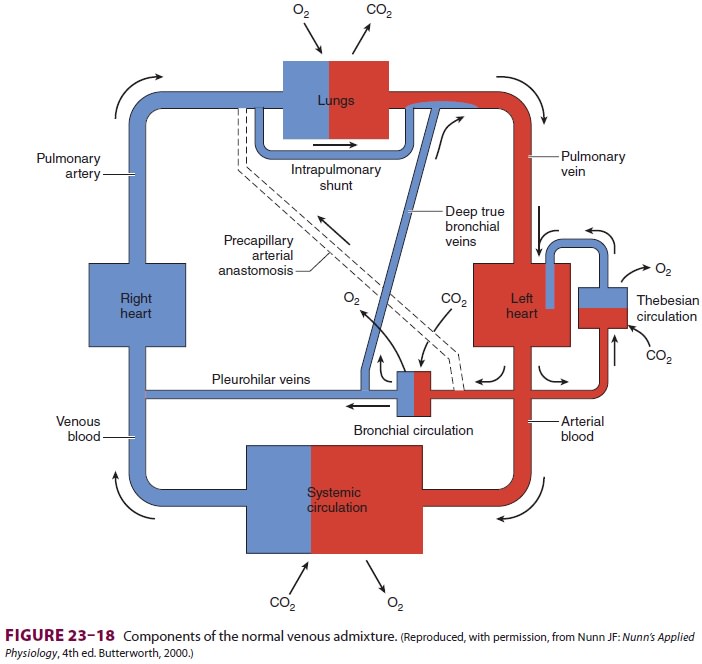 4. Eﬀects of Anesthesia on Gas Exchange

Abnormalities in gas exchange during anesthesia are common. They include increased dead space, hypoventilation, and increased intrapulmonary shunting. There is increased scatter of V/Q ratios. Increases in alveolar dead space are most commonly seen during controlled ventilation, but may also occur during spontaneous ventilation. General anesthesia commonly increases venous admixture to 5% to 10%, probably as a result of atelectasis and airway collapse in dependent areas of the lung. Inhalation agents, including nitrous oxide, also can inhibit hypoxic pulmonary vasoconstriction in high doses; for volatile agents, the ED 50 is about 2minimum alveolar concentration (MAC). Elderly patients seem to have the largest increases in Qs/Qt. Inspired O 2 tensions of 30% to 40% usually prevent hypoxemia, suggesting anesthesia increases relative shunt. PEEP is often effective in reducing venous admixture and preventing hypoxemia during gen-eral anesthesia, as long as cardiac output is main-tained Prolonged administration of high inspired O2 concentrations may be associated with atelecta-sis formation and increases in absolute shunt.

Atelectasis in this situation is known as resorption atelectasis and appears in areas with a low V/Q ratio ventilated at an O 2-inspired concentration close to 100%. Perfusion results in O2 being trans-ported out of the alveoli at a rate faster than it enters the alveoli, leading to an emptying of the alveoli and collapse.