Spontaneous ventilation is the result of rhythmic neural activity in respiratory centers within the brainstem.

Spontaneous ventilation is the result of rhythmic neural activity in respiratory centers within the brainstem. This activity regulates respiratory mus-cles to maintain normal tensions of O 2 and CO 2 in the body. The basic neuronal activity is modified by inputs from other areas in the brain, volitional and  autonomic, as well as various central and peripheral receptors (sensors).

The most important of these sensors are chemore-ceptors that respond to changes in hydrogen ion concentration. Central chemoreceptors are thought to lie on the anterolateral surface ofthe medulla and respond primarily to changes in cerebrospinal fluid (CSF) [H +]. This mechanism is effective in regulating Paco2, because the blood– brain barrier is permeable to dissolved CO2, but not to bicarbonate ions. Acute changes in Paco 2, but not in arterial [HCO 3–], are reflected in CSF; thus, a change in CO2 must result in a change in [H+]:

Over the course of a few days, CSF [HCO3–] can compensate to match any change in arterial [HCO 3–].Increases in Paco2 elevate CSF hydrogen ion concentration and activate the chemoreceptors. Secondary stimulation of the adjacent respiratory medullary centers increases alveolar ventilation (Figure23–25) and reduces Paco2 back to normal. Conversely, decreases in CSF hydrogen ion con-centration secondary to reductions in Paco2 reduce alveolar ventilation and elevate Paco2. Note that the relationship between Paco2 and minute volume is nearly linear. Also note that very high arterial Paco2 tensions depress the ventilatory response (CO2 nar-cosis). The Paco2 at which ventilation is zero (x-inter-cept) is known as the apneic threshold. Spontaneous respirations are typically absent under anesthesia when Paco2 falls below the apneic threshold. (In the awake state, cortical influences prevent apnea, so apneic thresholds are not ordinarily seen.) In contrast to peripheral chemoreceptors , central chemoreceptor activity is depressed by hypoxia. 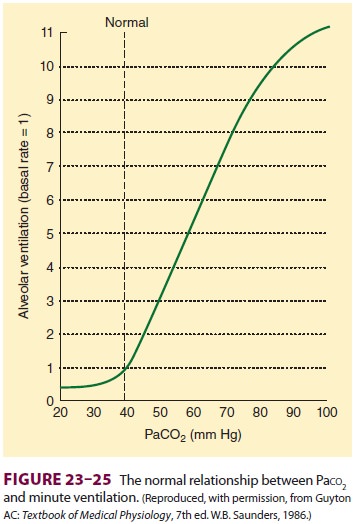 Peripheral chemoreceptors include the carotid bod-ies (at the bifurcation of the common carotid arter-ies) and the aortic bodies (surrounding the aortic arch). The carotid bodies are the principal periph-eral chemoreceptors in humans and are sensitive to changes in Pao2, Paco2, pH, and arterial perfu-sion pressure. They interact with central respiratory centers via the glossopharyngeal nerves, producing reflex increases in alveolar ventilation in response to reductions in Pao2, arterial perfusion, or eleva-tions in [H +] and Paco2. Peripheral chemoreceptors 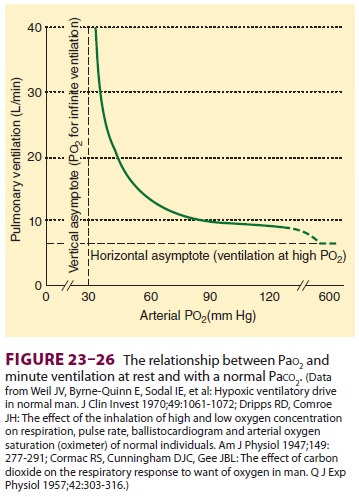 are also stimulated by cyanide, doxapram, and large doses of nicotine. In contrast to central chemore-ceptors, which respond primarily to Paco2 (really [H+]), the carotid bodies are most sensitive to Pao2 (Figure23–26). Note that receptor activity does not appreciably increase until Pao 2 decreases below 50 mm Hg. Cells of the carotid body (glomus cells) are thought to be primarily dopaminergic neurons. Anti-dopaminergic drugs (such as phenothiazines), most commonly used anesthetics, and bilateral carotid surgery abolish the peripheral ventilatory response to hypoxemia.

Impulses from these receptors are carried centrally by the vagus nerve. Stretch receptors are distributed in the smooth muscle of airways; they are respon-sible for inhibition of inspiration when the lung is inflated to excessive volumes (Hering–Breuer infla-tionnormally play a minor role in humans. In fact, bilat-eral vagal nerve blocks have a minimal effect on the normal respiratory pattern.

Th ese include various muscle and joint receptors on pulmonary muscles and the chest wall. Input from these sources is probably important during exer-cise and in pathological conditions associated with decreased lung or chest compliance.

4. Eﬀects of Anesthesia on the Control of Breathing

The most important effect of most general anesthet-ics on breathing is a tendency to promote hypoven-tilation. The mechanism is probably dual: central depression of the chemoreceptor and depression of external intercostal muscle activity. The magnitude of the hypoventilation is generally proportional to anesthetic depth. With increasing depth of anesthesia, the slope of the Paco2/minute ventilation curve decreases, and the apneic threshold increases (Figure23–27). This effect is at least par-tially reversed by surgical stimulation. 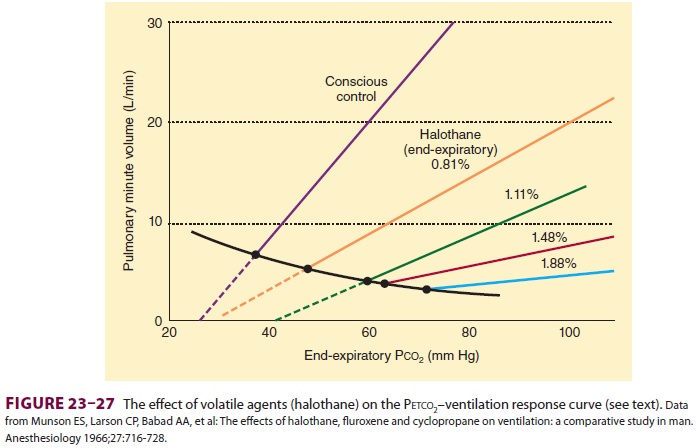 The peripheral response to hypoxemia is even more sensitive to anesthetics than the central CO 2 response and is nearly abolished by even subanes-thetic doses of most inhalation agents (including nitrous oxide) and many intravenous agents.