The movement of the lungs is passive and deter-mined by the impedance of the respiratory system, which can be divided into the elastic resistance of tissues and the gas–liquid interface and the nonelas-tic resistance to gas flow.

Both the lungs and the chest have elastic proper-ties. The chest has a tendency to expand outward, whereas the lungs have a tendency to collapse. When the chest is exposed to atmospheric pressure (open pneumothorax), it usually expands about 1 L in adults. In contrast, when the lung is exposed to atmospheric pressure, it collapses completely and all the gas within it is expelled. The recoil properties of the chest are due to structural components that resist deformation and chest wall muscle tone. The elastic recoil of the lungs is due to their high content of elastin fibers, and, even more important, the sur-face tension forces acting at the air–fluid interface in alveoli.

The gas–fluid interface lining the alveoli causes them to behave as bubbles. Surface tension forces tend to reduce the area of the interface and favor alveolar collapse. Laplace’s law can be used to quantify these forces:

The pressure derived from the equation is that within the alveolus. Alveolar collapse is therefore directly proportional to surface tension. Fortunately,in contrast to a bubble, pulmonary surfactant decreases alveolar surface tension. Moreover, the ability of the surfactant to lower surface tension is directly proportional to its concentration within the alveolus, resulting in lower intraalveolar pressure in smaller alveoli. As alveoli become smaller, the sur-factant within becomes more concentrated, and sur-face tension is more effectively reduced. Conversely, when alveoli are overdistended, surfactant becomes less concentrated, and surface tension increases. The net effect is to stabilize alveoli; small alveoli are pre-vented from getting smaller, whereas large alveoli are prevented from getting larger.

Elastic recoil is usually measured in terms of com-pliance (C), which is defined as the change in vol-ume divided by the change in distending pressure. Compliance measurements can be obtained for either the chest, the lung, or both together (Figure 23–4). 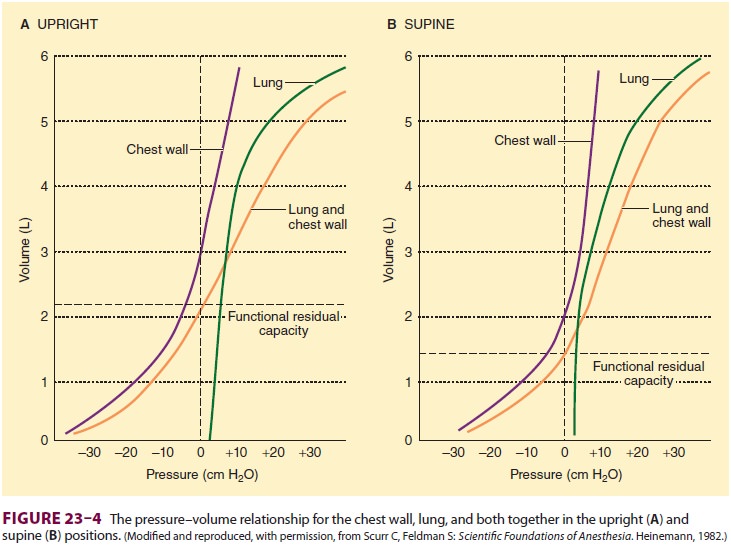 In the supine position, chest wall compliance (Cw) is reduced because of the weight of the abdominal contents against the diaphragm. Measurements are usually obtained under static conditions, (ie, at equilibrium). (Dynamic lung compliance [Cdyn,l], which is measured during rhythmic breathing, is also dependent on airway resistance.) Lung compli-ance (Cl) is defined as

where transthoracic pressure equals atmospheric pressure minus intrapleural pressure.Normal chest wall compliance is 200 mL/ cm H2O. Total compliance (lung and chest wall together) is 100 mL/cm H2O and is expressed by the following equation:

Lung volumes are important parameters in respira-tory physiology and clinical practice ( Table 23–1 and Figure 23–5). The sum of all of the named lung volumes equals the maximum to which the lung can be inflated. Lung capacities are clinically useful measurements that represent a combination of two or more volumes. 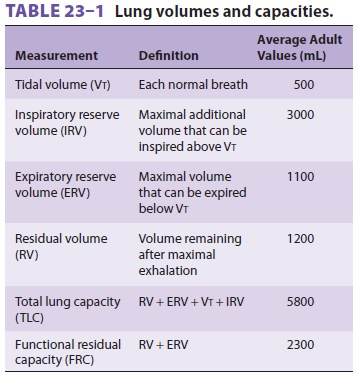 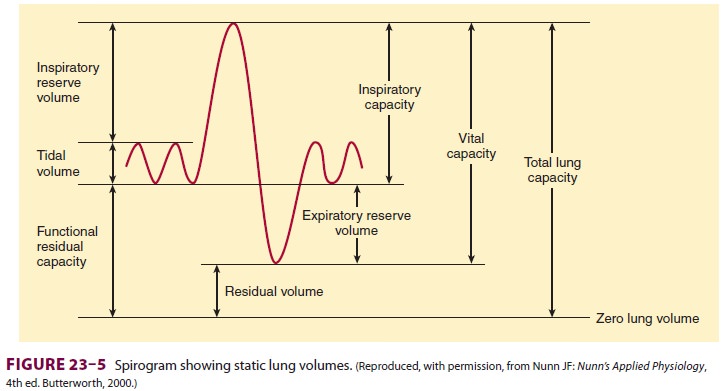 The lung volume at the end of a normal exha-lation is called functional residual capacity(FRC). At this volume, the inward elastic recoil of the lung approximates the outward elastic recoil of the chest (including resting diaphragmatic tone). Thus, the elastic properties of both chest and lung define the point from which normal breathing takes place. Functional residual capacity can be measured by nitrogen washout or helium washin technique or by body plethysmography. Factors known to alter the FRC include the following:

Sex: FRC is reduced by about 10% in femalescompared with males.

Posture: FRC decreases as a patient is movedfrom an upright to a supine or prone position. This is the result of reduced chest compliance as the abdominal contents push up against the diaphragm. The greatest change occurs between 0° and 60° of inclination. No further decrease is observed with a head-down position of up to 30°.

Lung disease: Decreased compliance ofthe lung, chest, or both is characteristic of restrictive pulmonary disorders all of which are associated with a low FRC.

Diaphragmatic tone: This normallycontributes to FRC.

As described above (see the section on Functional Respiratory Anatomy), small airways lacking carti-laginous support depend on radial traction caused by the elastic recoil of surrounding tissue to keep them open; patency of these airways, particularly in basal areas of the lung, is highly dependent on lung volume. The volume at which these airways begin to close in dependent areas of the lung is called the closing capacity. At lower lung volumes, alveoli independent areas continue to be perfused but are no longer ventilated; intrapulmonary shunting of deoxygenated blood promotes hypoxemia .

Closing capacity is usually measured using a tracer gas (xenon-133), which is inhaled near resid-ual volume and then exhaled from total lung capacity.Closing capacity is normally well below FRC (Figure 23–6), but rises steadily with age (Figure 23–7). This increase is probably responsible for the normal age-related decline in arterial O 2 ten-sion. At an average age of 44 years, closing capacity 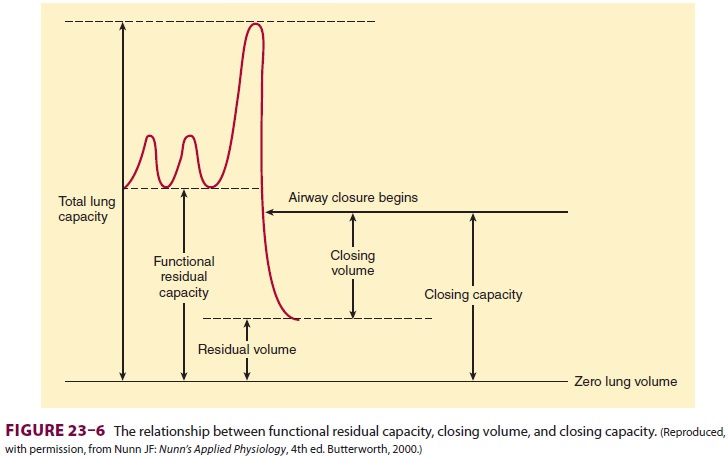 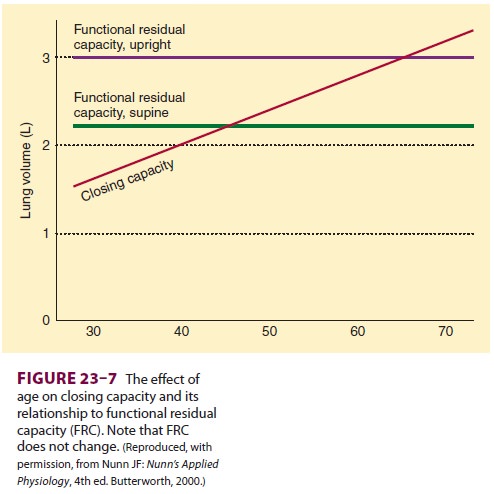 Vital capacity (VC) is the maximum volume of gas that can be exhaled following maximal inspiration. In addition to body habitus, VC is also dependent on respiratory muscle strength and chest–lung compli-ance. Normal VC is about 60–70 mL/kg.

Gas flow in the lung is a mixture of laminar and turbulent flow. Laminar flow can be thought of as consisting of concentric cylinders of gas flowing at dif-ferent velocities; velocity is highest in the center and decreases toward the periphery. During laminar flow,

where Raw is airway resistance.

Turbulence generally occurs at high gas flows, at sharp angles or branching points, and in response to abrupt changes in airway diameter. Whether turbu-lent or laminar flow occurs can be predicted by the Reynolds number, which results from the following equation:

A low Reynolds number (<1000) is associated with laminar flow, whereas a high value (>1500) produces turbulent flow. Laminar flow normally occurs only distal to small bronchioles (<1 mm). Flow in larger airways is probably turbulent. Of the 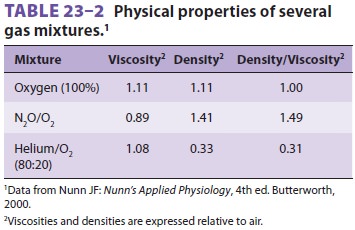 gases used clinically, only helium has a significantly lower density-to-viscosity ratio, making it useful clinically during severe turbulent flow (as caused by upper airway obstruction). A helium–O2 mixture not only is less likely to cause turbulent flow but also reduces airway resistance when turbulent flow is present (Table 23–2).

Normal total airway resistance is about 0.5–2 cm H2O/L/sec, with the largest contribution coming from medium-sized bronchi (before the seventh generation). Resistance in large bronchi is low because of their large diameters, whereas resistance in small bronchi is low because of their large total cross-sectional area. The most impor-tant causes of increased airway resistance include bronchospasm, secretions, and mucosal edema as well as volume-related and flow-related airway collapse. 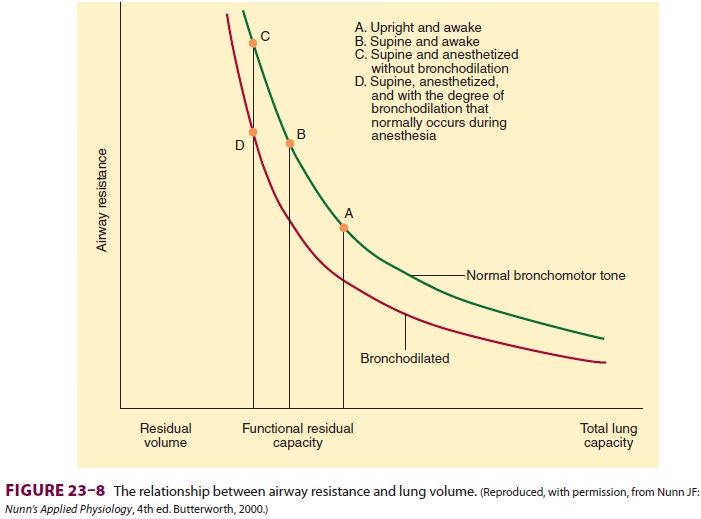 During forced exhalation, reversal of the normal transmural airway pressure can cause collapse of these airways (dynamic airway compression). Two contributing factors are responsible: generation of a positive pleural pressure and a large pressure drop across intrathoracic airways as a result of increased airway resistance. The latter is in turn due to high  (turbulent) gas flow and the reduced lung volume. The terminal portion of the flow/volume curve is therefore considered to be effort independent (Figure 23–9).

The point along the airways where dynamic compression occurs is called the equal pressure point. It is normally beyond the eleventh to thirteenth gen-eration of bronchioles where cartilaginous support is 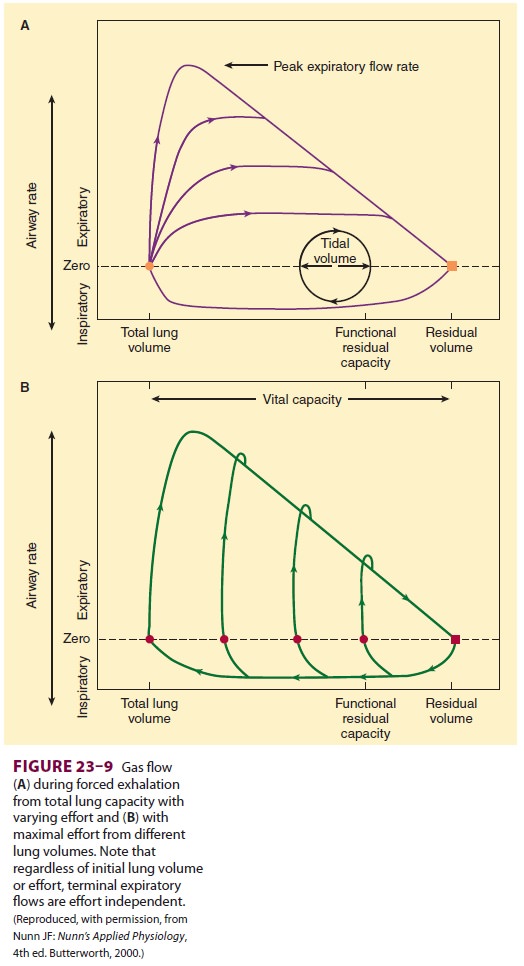 Measuring vital capacity as an exhalation that is as forceful and rapid as possible (Figure 23–10) provides important information about airway resis-tance. The ratio of the forced expiratory volume in the first second of exhalation (FEV1) to the total forced vital capacity (FVC) is proportional to the degree of airway obstruction. Normally, FEV1/FVCis ≥80%. Whereas both FEV1 and FVC are effort dependent, forced midexpiratory flow

(FEF25–75%) is more effort independent and may be a more reliable measurement of obstruction. 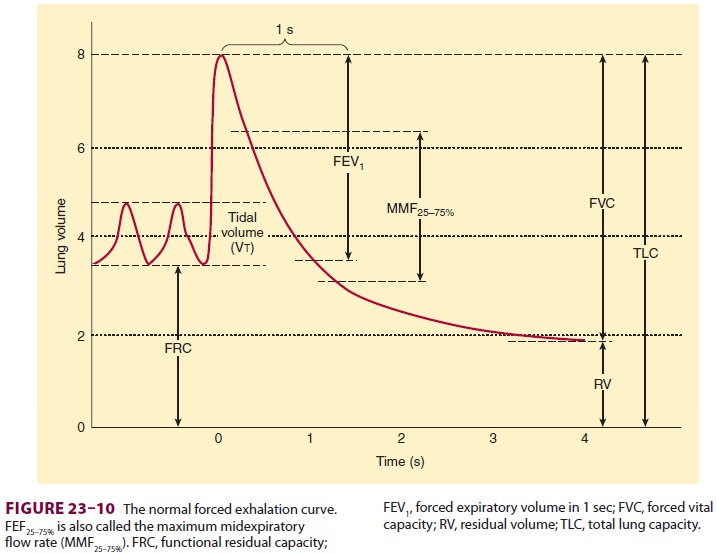 Th is component of nonelastic resistance is gener-ally underestimated and often overlooked, but may account for up to half of total airway resistance. It seems to be primarily due to viscoelastic (frictional) resistance of tissues to gas flow.

Because expiration is normally entirely passive, both the inspiratory and the expiratory work of breathing is performed by the inspiratory muscles (primarily the diaphragm). Three factors must be overcome during ventilation: the elastic recoil of the chest and lung, frictional resistance to gas flow in the airways, and tissue frictional resistance. 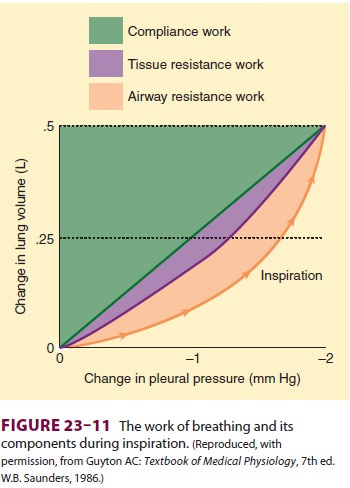 Respiratory work can be expressed as the prod-uct of volume and pressure ( Figure 23–11). During inhalation, both inspiratory airway resistance and pulmonary elastic recoil must be overcome; nearly 50% of the energy expended is stored pulmonary elastic recoil. During exhalation, the stored potential energy is released and overcomes expiratory airway resistance. Increases in either inspiratory or expira-tory resistance are compensated by increased inspi-ratory muscle effort. When expiratory resistance increases, the normal compensatory response is to increase lung volume such that Vt breathing occurs at an abnormally high FRC. The greater elastic recoilenergy stored at a higher lung volume overcomes the added expiratory resistance. Excessive amounts of expiratory resistance also activate expiratory mus-cles (see above).Respiratory muscles normally account for only 2% to 3% of O2 consumption but operate at about 10% efficiency. Ninety percent of the work is dissi-pated as heat (due to elastic and airflow resistance). In pathological conditions that increase the load on the diaphragm, muscle efficiency usually progressively decreases, and contraction may become uncoordi-nated with increasing ventilatory effort; moreover, a point may be reached whereby any increase in O2 uptake (because of augmented ventilation) is con-sumed by the respiratory muscles themselves.

The work required to overcome elastic resis-tance increases as Vt increases, whereas the work required to overcome airflow resistance increases as respiratory rate (and, necessarily, expiratory flow) increases. Faced with either condition, patients minimize the work of breathing by altering the respiratory rate and Vt (Figure 23–12). Patientswith reduced compliance tend to have rapid, shal-low breaths, whereas those with increased airflow resistance have a slow, deep breathing pattern. 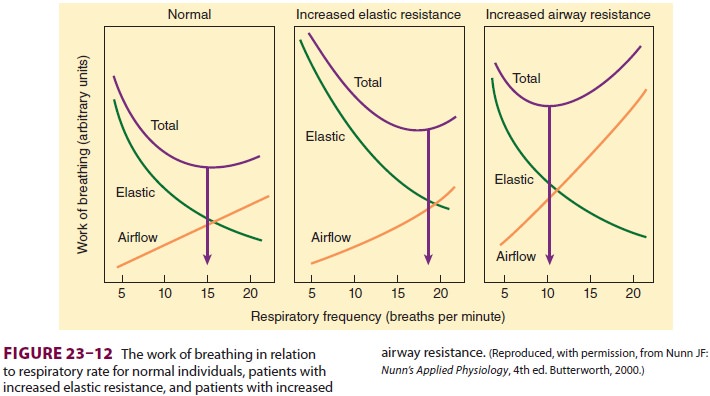 5. Eﬀects of Anesthesia on Pulmonary Mechanics

The effects of anesthesia on breathing are complex and relate to changes both in position and anesthetic agent.

Changes in lung mechanics due to general anes-thesia occur shortly after induction. The supineposition reduces the FRC by 0.8–1.0 L, and induc-tion of general anesthesia further reduces the FRC by 0.4–0.5 L. FRC reduction is a consequence of alveolar collapse and compression atelectasis due to loss of inspiratory muscle tone, change in chest wall rigidity, and upward shift of the diaphragm. The mechanisms may be more complex; for example, only the depen-dent (dorsal) part of the diaphragm in the supine position moves cephalad. Other factors are likely due to a change in intrathoracic volume secondary to increased blood volume in the lung and changes in 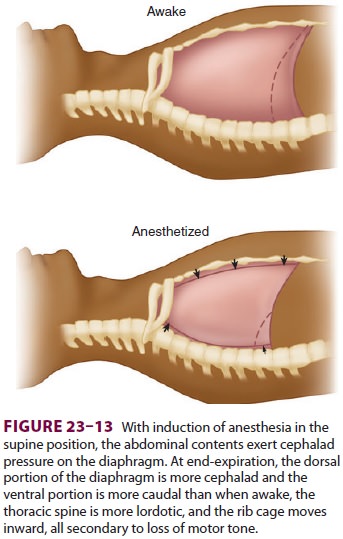 chest wall shape (Figure 23–13). The higher position of the dorsal diaphragm and changes in the thoracic cavity itself decrease lung volumes. This decrease in FRC is not related to anesthetic depth and may per-sist for several hours or days after anesthesia. Steep head-down (Trendelenburg) position (>30°) may reduce FRC even further as intrathoracic blood vol-ume increases. In contrast, induction of anesthesia in the sitting position seems to have little effect on FRC. Muscle paralysis does not seem to change FRC sig-nificantly when the patient is already anesthetized.

The effects of anesthesia on closing capacity are more variable. Both FRC and closing capacity, however, are generally reduced to the same extent under anesthesia. Thus, the risk of increased intra-pulmonary shunting under anesthesia is similar to that in the conscious state; it is greatest in the elderly, in obese patients, and in those with underlying pul-monary disease.

The reduction in FRC associated with general anes-thesia would be expected to increase airway resis-tance. Increases in airway resistance are not usually observed, however, because of the bronchodilating properties of the volatile inhalation anesthetics.

Increased airway resistance is more commonly due to pathological factors (posterior displacement of the tongue; laryngospasm; bronchoconstriction; or secretions, blood, or tumor in the airway) or equip-ment problems (small tracheal tubes or connectors, malfunction of valves, or obstruction of the breath-ing circuit).

Eﬀects on the Work of Breathing

Increases in the work of breathing under anesthesia are most often secondary to reduced lung and chest wall compliance, and, less commonly, increases in airway resistance (see above). The problems of increased work of breathing are usually circum-vented by controlled mechanical ventilation.

Eﬀects on the Respiratory Pattern