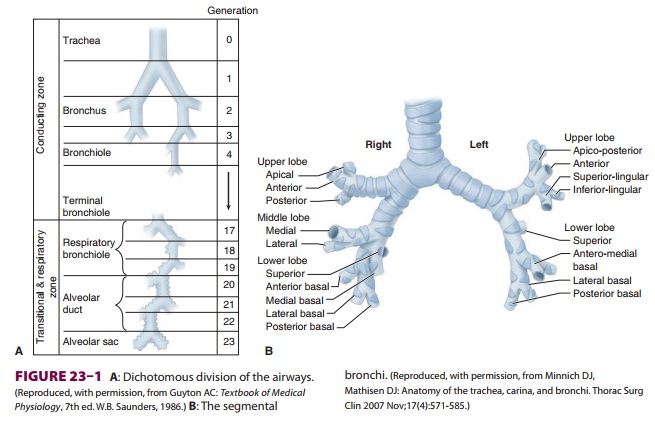 The importance of pulmonary physiology to anes-thetic practice is obvious. The most commonly used anesthetics—the inhalation agents—depend on the lungs for uptake and elimination. The most important side effects of both inhalation and intravenously administered anesthetics are pri-marily respiratory. Moreover, muscle paralysis, unusual positioning during surgery, and techniques such as one-lung anesthesia and cardiopulmo-nary bypass profoundly alter normal pulmonary physiology.

The rib cage contains the two lungs, each sur-rounded by its own pleura. The apex of the chest is small, allowing only for entry of the trachea, esoph-agus, and blood vessels, whereas the base is formed by the diaphragm. Contraction of the diaphragm— the principal pulmonary muscle—causes the base of the thoracic cavity to descend 1.5–7 cm and its contents (the lungs) to expand. Diaphragmatic movement normally accounts for 75% of the change in chest volume. Accessory respiratory muscles also increase chest volume (and lung expansion) by their action on the ribs. Each rib (except for the last two) articulates posteriorly with a vertebra and is angu-lated downward as it attaches anteriorly to the ster-num. Upward and outward rib movement expands the chest.

During normal breathing, the diaphragm, and, to a lesser extent, the external intercostal muscles are responsible for inspiration; expiration is gener-ally passive. With increasing effort, the sternoclei-domastoid, scalene, and pectoralis muscles can be recruited during inspiration. The sternocleidomas-toid muscles assist in elevating the rib cage, whereas the scalene muscles prevent inward displacement of the upper ribs during inspiration. The pectoralis muscles can assist chest expansion when the arms are placed on a fixed support. Expiration is normally passive in the supine position, but becomes active in the upright position and with increased effort. Exhalation may be facilitated by the abdominal muscles (rectus abdominis, external and internal oblique, and transversus) and perhaps the internal intercostal muscles—aiding the downward move-ment of the ribs.

Although not usually considered respiratory muscles, some pharyngeal muscles are important in maintaining the patency of the airway. Tonic and reflex inspiratory activity in the genioglossus keeps the tongue away from the posterior pharyngeal wall. Tonic activity in the levator palati, tensor palati, pal-atopharyngeus, and palatoglossus prevents the soft palate from falling back against the posterior phar-ynx, particularly in the supine position.

The trachea serves as a conduit for ventilation and the clearance of tracheal and bronchial secretions. The trachea begins at the lower border of the cricoid cartilage and extends to the level of the carina and has an average length of 10–13 cm. It is composed of C-shaped cartilaginous rings, which form the anterior and lateral walls of the trachea and are connected posteriorly by the membranous wall of the trachea. The external diameters of the trachea measure approximately 2.3 cm coronally and 1.8 cm sagitally in men, with corresponding values of 2.0 cm and 1.4 cm, respectively, in women. The cricoid carti-lage is the narrowest part of the trachea, with an aver-age diameter of 17 mm in men and 13 mm in women.

Humidification and filtering of inspired air are functions of the upper airway (nose, mouth, and pharynx). The function of the tracheobronchial tree is to conduct gas flow to and from the alveoli. Dichotomous division (each branch dividing into two smaller branches), starting with the trachea and ending in alveolar sacs, is estimated to involve 23 divisions, or generations (Figure 23–1). With each generation, the number of airways is approximately doubled. Each alveolar sac contains, on average, 17 alveoli. An estimated 300 million alveoli provide an enormous membrane (50–100 m2) for gas exchange in the average adult.

With each successive division, the mucosal epi-thelium and supporting structures of the airways gradually change. The mucosa makes a gradual transition from ciliated columnar to cuboidal and finally to flat alveolar epithelium. Gas exchange can occur only across the flat epithelium, which begins to appear on respiratory bronchioles (gen-erations 17–19). The wall of the airway gradually loses its cartilaginous support (at the bronchioles) and then its smooth muscle. Loss of cartilaginous support causes the patency of smaller airways to become dependent on radial traction by the elas-tic recoil of the surrounding tissue; as a corollary, airway diameter becomes dependent on total lung volume. 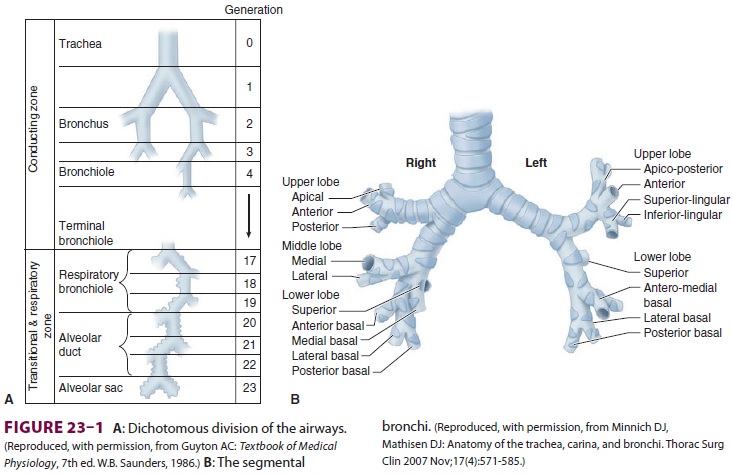 Cilia on the columnar and cuboidal epithelium normally beat in a synchronized fashion, such that the mucus produced by the secretory glands lining the airway (and any associated bacteria or debris) moves up toward the mouth.

Alveolar size is a function of both gravity and lung volume. The average diameter of an alveolus is thought to be 0.05–0.33 mm. In the upright posi-tion, the largest alveoli are at the pulmonary apex, whereas the smallest tend to be at the base. With inspiration, discrepancies in alveolar size diminish.

Each alveolus is in close contact with a network of pulmonary capillaries. The walls of each alveolus are asymmetrically arranged (Figure 23–2). On the thin side, where gas exchange occurs, the alveolar epithelium and capillary endothelium are separated only by their respective cellular and basement mem-branes; on the thick side, where fluid and solute exchange occurs, the pulmonary interstitial spaceseparates alveolar epithelium from capillary endo-thelium. The pulmonary interstitial space contains mainly elastin, collagen, and perhaps nerve fibers. Gas exchange occurs primarily on the thin side of the alveolocapillary membrane, which is less than 0.4 μm thick. The thick side (1–2 μm) provides structural support for the alveolus.

The pulmonary epithelium contains at least two cell types. Type I pneumocytes are flat and form tight (1-nm) junctions with one another. These tight junctions are important in preventing the passage of large oncotically active molecules such as albu-min into the alveolus. Type II pneumocytes, which are more numerous than type I pneumocytes (but because of their shape occupy less than 10% of the alveolar space), are round cells that contain promi-nent cytoplasmic inclusions (lamellar bodies). These inclusions contain surfactant, an important sub-stance necessary for normal pulmonary mechanics . Unlike type I cells, type II pneumocytes are capable of cell division and can produce type I 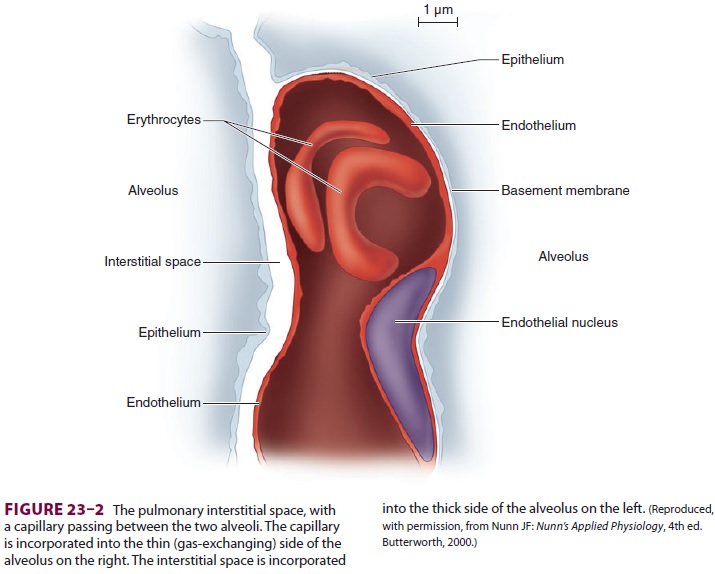 pneumocytes if the latter are destroyed. They are also resistant to O2 toxicity.

The pulmonary circulation normally receives the total output of the right heart via the pulmonary artery, which divides into right and left branches to supply each lung. Deoxygenated blood passes through the pulmonary capillaries, where O 2 is taken up and CO2 is eliminated. The oxygenated blood is then returned to the left heart by four main pulmonary veins (two from each lung). Although flows through the systemic and pulmonary circula-tions are equal, the lower pulmonary vascular resis-tance results in pulmonary vascular pressures that are one-sixth of those in the systemic circulation; as a result, both pulmonary arteries and veins nor-mally have thinner walls than systemic vessels with less smooth muscle.

There are connections between the bronchial and the pulmonary circulations. Direct pulmo-nary arteriovenous communications, bypassing the pulmonary capillaries, are normally insignificant but may become important in certain pathological states. The importance of the bronchial circulation in contributing to the normal venous admixture is discussed below.

Pulmonary capillaries are incorporated into the walls of alveoli. The average diameter of these cap-illaries (about 10 µm) is barely enough to allow passage of a single red cell. Because each capillary network supplies more than one alveolus, blood may pass through several alveoli before reaching the pulmonary veins. Because of the relatively low pressure in the pulmonary circulation, the amount of blood flowing through a given capillary network is affected by both gravity and alveolar size. Large alveoli have a smaller capillary cross-sectional area and consequently increased resistance to blood flow. In the upright position, apical capillaries tend to have reduced flows, whereas basal capillaries have higher flows.

The pulmonary capillary endothelium has rela-tively large junctions (5 nm wide), allowing the pas-sage of large molecules such as albumin. As a result, pulmonary interstitial fluid is relatively rich in albu-min. Circulating macrophages and neutrophils are able to pass through the endothelium, as well as the smaller alveolar epithelial junctions, with relative ease. Pulmonary macrophages are commonly seen in the interstitial space and inside alveoli; they serve to prevent bacterial infection and to scavenge for-eign particles.

Lymphatic channels in the lung originate in the interstitial spaces of large septa and are close to the bronchial arteries. Bronchial lymphatics return flu-ids, lost proteins, and various cells that have escaped in the peribronchovascular interstitium into the blood circulation, thus ensuring homeostasis and permitting lung function. Because of the large endo-thelial junctions, pulmonary lymph has a relatively high protein content, and total pulmonary lymph flow may be as much as 20 mL/hr. Large lymphatic vessels travel upward alongside the airways, form-ing the tracheobronchial chain of lymph nodes. Lymphatic drainage channels from both lungs com-municate along the trachea.

The diaphragm is innervated by the phrenic nerves, which arise from the C3–C5 nerve roots. Unilateral phrenic nerve block or palsy only modestly reduces most indices of pulmonary function (about 25%) in normal subjects. Although bilateral phrenic nerve palsies produce more severe impairment, accessory muscle activity may maintain adequate ventilation in some patients. Intercostal muscles are innervated by their respective thoracic nerve roots. Cervical cord injuries above C5 are incompatible with spon-taneous ventilation because both phrenic and inter-costal nerves are affected.

Both α- and β-adrenergic receptors are present in the pulmonary vasculature, but the sympathetic system normally has little effect on pulmonary vascular tone. α1-Activity causes vasoconstriction; β2-activity mediates vasodilation. Parasympatheticvasodilatory activity seems to be mediated via the release of nitric oxide.