When dealing with gas mixtures, each gas is considered to contribute separately to total gas pressure, and its partial pressure is directly pro-portional to its concentration.

When dealing with gas mixtures, each gas is considered to contribute separately to total gas pressure, and its partial pressure is directly pro-portional to its concentration. Air has an O2 con-centration of approximately 21%; therefore, if the barometric pressure is 760 mm Hg (sea level), the partial pressure of O2 (Po2) in air is normally 159.6 mm Hg: 760 mm Hg × 0.21 = 159.6 mm Hg

In its general form, the equation may be written as follows:

where Pb = barometric pressure and Fio2= the frac-tion of inspired O 2.

·        Partial pressure in millimeters of mercury approximates the percentage × 7

·        Partial pressure in kilopascals is approximately the same as the percentage.

With every breath, the inspired gas mixture is humidified at 37°C in the upper airway. The inspired tension of O2 (Pio2) is therefore reduced by the added water vapor. Water vapor pressure is depen-dent only upon temperature and is 47 mm Hg at 37°C. In humidified air, the normal partial pressure of O2 at sea level is 149.7 mm Hg:

The general equation is

where Ph2o = the vapor pressure of water at body temperature.

In alveoli, the inspired gases are mixed with residual alveolar gas from previous breaths, O2 is taken up, and CO2 is added. The final alveolar O2 tension (Pao2) is therefore dependent on all of these factors and can be estimated by the following equation:

Rq is usually not measured. Note that large

A yet simpler method of approximating Pao2 in millimeters of mercury is to multiply the percentage of inspired O 2 concentration by 6. Thus, at 40%, Pao2 is 6 × 40, or 240 mm Hg.

O2 transfer across the alveolar–capillary mem-brane is expressed as O2 diffusing capacity (Dlo2):

Because Pc′o2 cannot be measured accurately, measurement of carbon monoxide diffusion capacity (Dlco) is used instead to assess gas transfer across the alveolar–capillary membrane. Because carbon monoxide has a very high affinity for hemoglobin, there is little or no CO in pulmonary capillary blood, so that even when it is administered at low concen-tration, Pc′co can be considered zero. Therefore,

Reductions in Dlco imply an impediment in gas transfer across the alveolar–capillary membrane Such impediments may be due to abnormal V/Q ratios, extensive destruction of the gas alveolar– capillary membrane, or very short capillary transit times. Abnormalities are accentuated by increases in O2 consumption and cardiac output, such as occurs during exercise.

Pao2 cannot be calculated like Pao2 but must be measured at room air. T he alveolar-to-arterial O 2 partial pressure gradient (A–a gradient) is normally less than 15 mm Hg, but progressively increases with age up to 20–30 mm Hg. Arterial O 2 tension can be approximated by the following formula (in mm Hg):

The range is 60–100 mm Hg (8–13 kPa). Decreases are probably the result of a progressive increase in closing capacity relative to FRC (see above). Table 23–4 lists the mechanisms of hypox-emia (Pao2<60 mm Hg).

The most common mechanism for hypoxemia is an increased alveolar–arterial gradient. The A–agradient for Odepends on the amount of right to-left shunting, the amount of V/Q scatter, and the mixed venous O2 tension . The last depends on cardiac output, O2 consumption, and hemoglobin concentration. 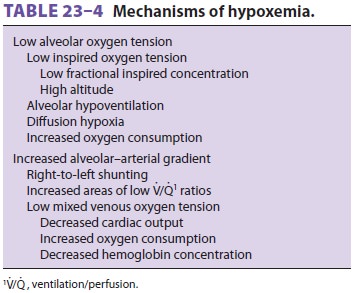 The A–a gradient for O2 is directly proportional to shunt, but inversely proportional to mixed venous O2 tension. The effect of each variable on Pao2 (and consequently the A–a gradient) can be determined only when the other variables are held constant. Figure 23–19 shows the effect of different degrees of shunting on Pao2. It should also be noted that the greater the shunt, the less likely the possibility that an increase in Fio2 will prevent hypoxemia. Moreover, isoshunt lines seem to be most useful for O2 concentrations between 35% and 100%. Lower O2 concentrations require modification of isoshunt lines to account for the effect of V/Q scatter. 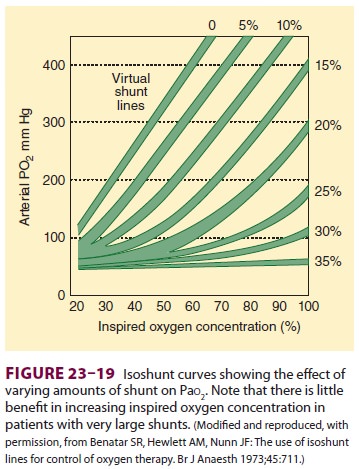 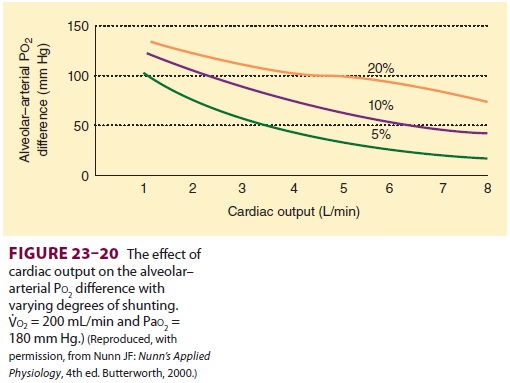 delivery (Table 23–5). A true mixed venous blood sample contains venous drainage from the superior vena cava, the inferior vena cava, and the heart; it must therefore be obtained from a pulmonary artery catheter. 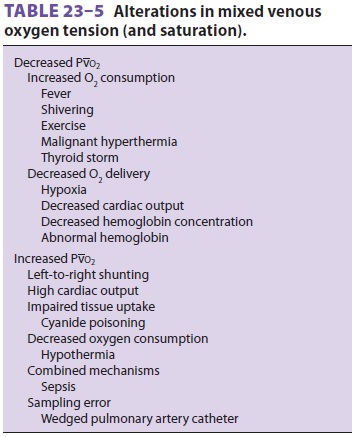 Carbon dioxide is a by-product of aerobic metabo-lism in mitochondria. There are therefore small con-tinuous gradients for CO2 tension from mitochondria to cell cytoplasm, extracellular fluid, venous blood, and alveoli, where the CO2 is finally eliminated.

where Va is alveolar ventilation ( Figure 23–21). In reality, Paco2 is related to CO2 elimination rather than production. Although the two are equal in a steady state, an imbalance occurs during periods 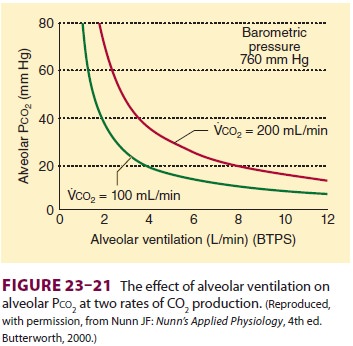 of acute hypoventilation or hypoperfusion, and the excess CO2 increases total body CO2 content.Clinically Pacois moredependentonalveolarventilation than is Vco2, because CO2 output does not vary appreciably under most circumstances. Moreover, the body’s large capacity to store CO  buffers acute changes in Vco2.

Pulmonary end-capillary CO 2 tension (Pc′co2) is virtually identical to Paco2 for the same reasons as those discussed in the section about O2. In addition, the diffusion rate for CO2 across the alveolar–capil-lary membrane is 20 times that of O2.

Arterial CO2 tension (Paco2), which is readily mea-surable, is identical to Pc′co2, and, necessarily, Paco2. Normal Paco2 is 38 ± 4 mm Hg (5.1 ± 0.5 kPa); in practice, 40 mm Hg is usually considered normal.Although low V/Q  ratios tend to increase•Paco2,whereas high V/Q ratios tend to decrease it (in contrast to the case for O2 [see above]), significant arterial-to-alveolar gradients for CO develop only in the presence of marked V/Q abnormalities (>30% venous admixture); even then the gradient is rela-tively small (2–3 mm Hg). Moreover, small increasesin the gradient appreciably increase COoutput into alveoli with relatively normal V/Q. Even moderate to severe disturbances usually fail to appreciably alter arterial CO 2 because of a reflex increase in ven-tilation from concomitant hypoxemia.

Because end-tidal gas is primarily alveolar gas and Paco2 is virtually identical to Paco2, end-tidal CO 2 tension (Petco2) is used clinically as an estimate of Paco2. The Paco2–Petco2 gradient is normally less than 5 mm Hg and represents dilution of alveolar gas with CO2-free gas from nonperfused alveoli (alveolar dead space).