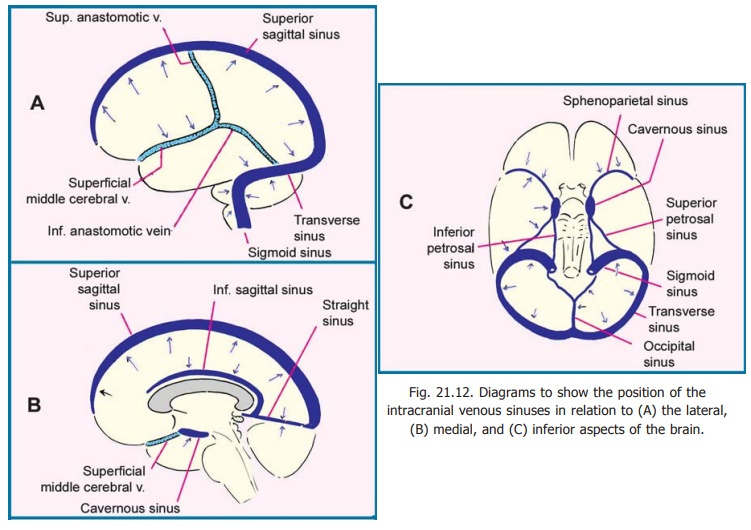 The veins draining the brain open into the dural venous sinuses.

Venous Drainage of the Brain

The veins draining the brain open into the dural venous sinuses (Fig. 21.12). These are the superior sagittal, inferior sagittal, straight, transverse, sigmoid, cavernous, sphenoparietal, petrosal and occipital sinuses. Ultimately, the blood from all these sinuses reaches the sigmoid sinus which becomes continuous with the internal jugular vein. The intracranial venous sinuses communicate with veins outside the skull through emissary veins. For details about intracranial venous sinuses see the author’s Textbook of Anatomy.

The venous drainage of individual parts of the brain is described below.

Veins of the Cerebral Hemisphere

The veins of the cerebral hemisphere consist of two sets, superficial and deep. 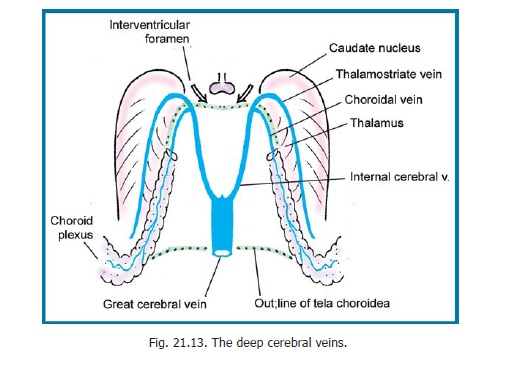 The deep veins of the cerebral hemisphere are the two internal cerebral veins, that join to form the great cerebral vein (Fig. 21.13); and the two basal veins, that wind round the midbrain to end in the great cerebral vein. Each internal cerebral vein begins at the interventricular foramen, andruns backwards in the tela choroidea, in the roof of the third ventricle. It has numerous tributaries. One of these is thethalamostriate vein which lies in the floorof the lateral ventricle (between the thalamus, medially; and the caudate nucleus, laterally). Each basal vein begins near the anterior perforated substance. It is formed by union of the following.

(b)          The deep middle cerebral vein, which lies deep in the stem and posterior ramus of the lateral sulcus.

The deep cerebral veins described above are responsible for draining the thalamus, the hypothalamus, the corpus striatum, the internal capsule, the corpus callosum, the septum pellucidum, and the choroid plexuses. Many tributaries of the internal cerebral veins extend beyond the corpus striatum into the white matter of the hemispheres. Here they establish communications with superficial veins. They can thus serve as alternative channels for draining parts of the cerebral cortex.

The corpus striatum and internal capsule are drained by two sets of striate veins. The superiorstriate veins run dorsally and drain into tributaries of the internal cerebral vein. The inferior striate veinsrun vertically downwards and emerge on the base of the brain through the anteriorperforated substance. Here they end in the basal vein.

Veins of the cerebellum and brainstem