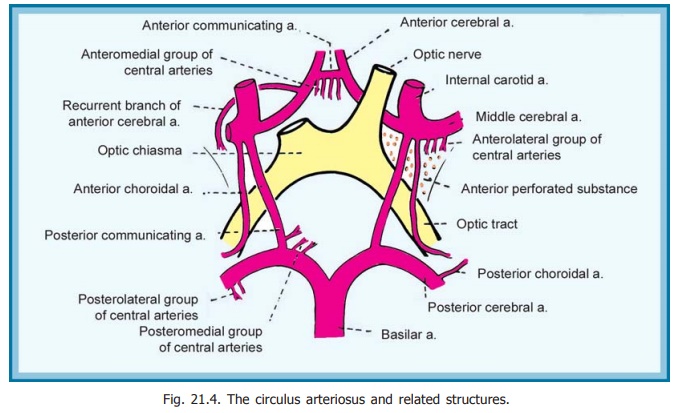 The brain is supplied by branches of theinternal carotid and the vertebral arteries. 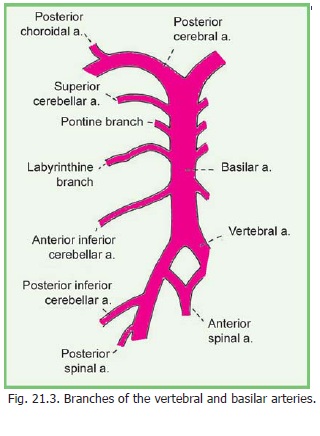 The two vertebral arteries ascend on theanterolateral aspect of the medulla. At the lowerborder of the pons they unite to form thebasilar artery

The basilar artery lies in the midline, ventralto the pons. At the upper border of the pons itbifurcates into two posterior cerebral arteries 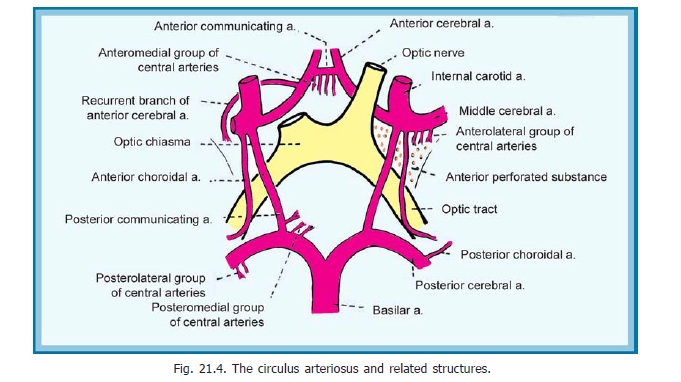 In addition to the larger arteries mentioned above, two smaller branches of the internal carotid system must be noted. One of these is the anterior choroidal artery which arises directly from the internal carotid, runs backwards in relation to the optic tract, and enters the inferior horn of the lateral ventricle through the choroid fissure. The other is the recurrent branch of the anterior cerebral artery (also called theartery of Heubner). This artery runs backwards and laterally to enter the anterior perforated substance.

The anterior, middle and posterior cerebral arteries give rise to two sets of branches, cortical and central. The cortical branches ramify on the surface of the cerebral hemispheres and supply the cortex. Thecentral (or perforating) branches pass deep into the substance of the cerebral hemisphere to supply structures within it. They consist of six main groups: anteromedial and posteromedial (which are median and unpaired); right and left anterolateral; and right and left posterolateral (Fig. 21.4). The arteries of the anteromedial group arise from the anterior cerebral and anterior communicating arteries. They enter the most medial part of the anterior perforated substance. The arteries of the anterolateral group are the so-called striate arteries. They arise mainly from the middle cerebral artery. Some of them arise from the anterior cerebral artery. The anterolateral group of perforating arteries enter the anterior perforated substance and divide into two sets, medial and lateral. The medial striate arteries ascend through the lentiform nucleus. They supply this nucleus and also the caudate nucleus and the internal capsule. The lateral striatearteries ascend lateral to the lower part of the lentiform nucleus; they then turn medially and passthrough the substance of the lentiform nucleus to reach the internal capsule and the caudate nucleus. One of these lateral striate arteries is usually larger than the others. It is called Charcot’s artery, or artery of cerebral haemorrhage. The posteromedial group of central arteries arise from theposterior cerebral and posterior communicating arteries. They enter the interpeduncular region. The central branches of the posterolateral group arise from the posterior cerebral artery, as it winds around the cerebral peduncle.

At this stage it may be noted that because of anastomoses between the major arteries supplying the brain, blood supply of the area supplied by one artery can be taken over by another artery in the event of it becoming blocked. This remark applies, however, only to the main arteries, and not totheir smaller branches .