Home | | Human Neuroanatomy(Fundamental and Clinical) | Arterial Supply of the Brainstem - Blood Supply of Central Nervous System
Posted On :  24.07.2017 02:03 am

The medulla is supplied by various branches of the vertebral arteries.

Arterial Supply of the Brainstem 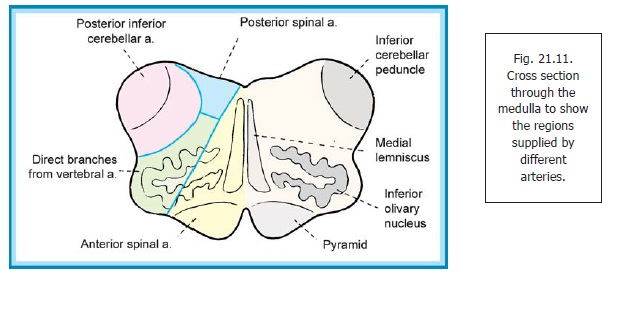 In the medial medullary syndrome the ventral and medial part of the medulla is damaged. Involvement of corticospinal fibres (pyramids) leads to contralateral hemiplegia. Damage to the hypoglossal nucleus leads to ipsilateral (lower motor neuron type of) paralysis of muscles of the tongue. Involvement of the medial lemniscus leads to loss of the sensation of fine touch, sense of movement and sense of position.

In the lateral medullary syndrome the structures damaged include the following.

1.              Damage to the lateral spinothalamic tract leads to contralateral loss of sensations of pain and temperature.

3.              Damage to the nucleus ambiguus leads to difficulty in swallowing (dysphagia) and in speech (dysarthria).

4.              Damage to the cerebellum and to the inferior cerebellar peduncle causes loss of equilibrium (ataxia) and giddiness.

Haemorrhage into the pons leads to coma (and is often fatal). The reticular formation, autonomic nervous system and the hypothalamus are affected. Apart from coma the condition is marked by pin point pupils and hyperpyrexia Bilateral facial paralysis and paralysis of all four limbs can occur if the haemorrhage is extensive.

The midbrain is supplied mainly by branches of the basilar artery. These are the posterior cerebral and superior cerebellar arteries and direct branches from the basilar artery. Branches are also received from the posterior communicating and anterior choroidal arteries. Branches arising from these vessels may either be paramedian, which supply parts near the midline; or circumferential which wind round the midbrain to supply lateral and dorsal parts. One of the latter arteries is called the quadrigeminal artery. It is the main source of blood to the colliculi.