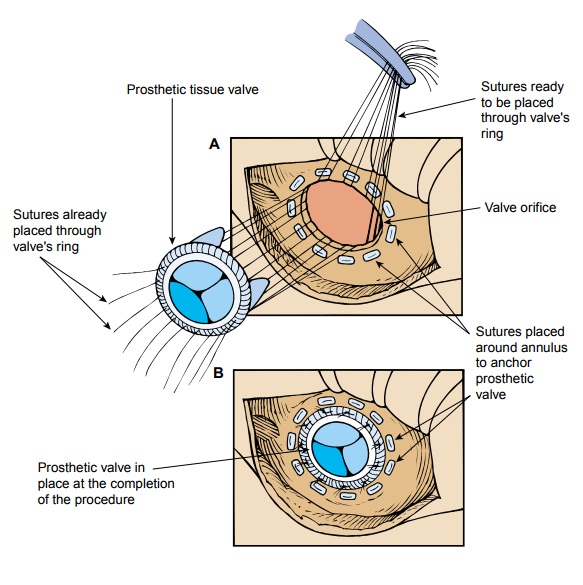 When valvuloplasty or valve repair is not a viable alternative, such as when the annulus or leaflets of the valve are immobilized by calcifications, valve replacement is performed.

Prosthetic valve replacement began in the 1960s. When valvu-loplasty or valve repair is not a viable alternative, such as when the annulus or leaflets of the valve are immobilized by calcifications, valve replacement is performed. General anesthesia and cardio-pulmonary bypass are used for all valve replacements. Most pro-cedures are performed through a median sternotomy (ie, incision through the sternum), although the mitral valve may be approached through a right thoracotomy incision.

After the valve is visualized, the leaflets and other valve struc-tures, such as the chordae and papillary muscles, are removed. Some surgeons leave the posterior mitral valve leaflet, its chordae, and papillary muscles in place to help maintain the shape and function of the left ventricle after mitral valve replacement. Su-tures are placed around the annulus and then into the valve pros-thesis. The replacement valve is slid down the suture into position and tied into place (Fig. 29-6). The incision is closed, and the sur-geon evaluates the function of the heart and the quality of the prosthetic repair. The patient is weaned from cardiopulmonary bypass, and surgery is completed. 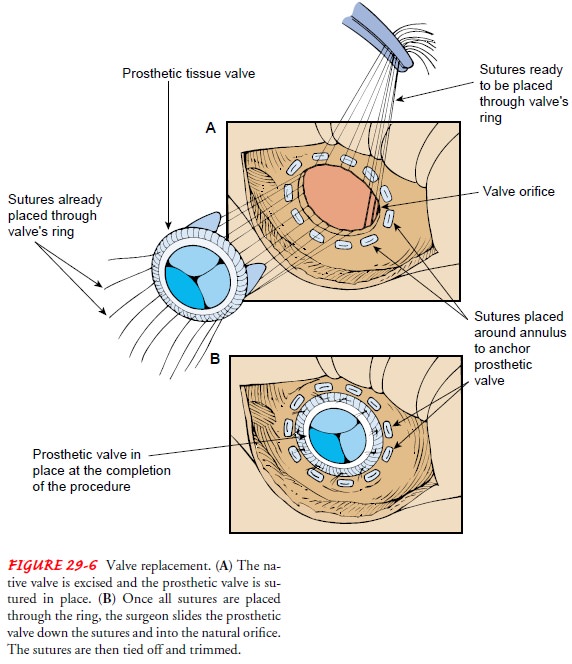 Before surgery, the heart gradually adjusted to the pathology, but the surgery abruptly “corrects” the way blood flows through the heart. Complications unique to valve replacement are related to the sudden changes in intracardiac blood pressures. All pros-thetic valve replacements create a degree of stenosis when they are implanted in the heart. Usually, the stenosis is mild and does not effect heart function. If valve replacement was for a stenotic valve, blood flow through the heart is often improved. The signs and symptoms of the backward heart failure resolve in a few hours or days. If valve replacement was for a regurgitant valve, it may take months for the chamber into which blood had been regurgitating to achieve its optimal postoperative function.

The signs and symptoms of heart failure resolve gradually as the heart function improves. The patient is at risk for many postoperative compli-cations, such as bleeding, thromboembolism, infection, conges-tive heart failure, hypertension, dysrhythmias, hemolysis, and mechanical obstruction of the valve. 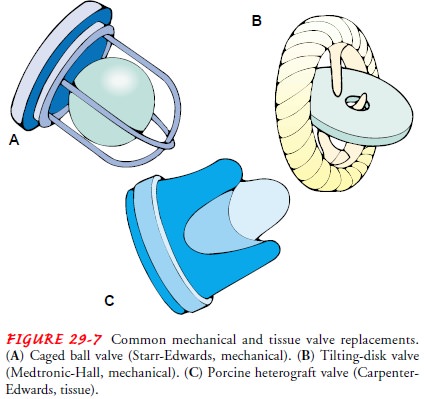 Tissue (ie, biologic) valves are of three types: xenografts, homo-grafts, and autografts. Tissue valves are less likely to generate thromboemboli, and long-term anticoagulation is not required. Tissue valves are not as durable as mechanical valves and require replacement more frequently.

Homografts, orallografts(ie, human valves), areobtained from cadaver tissue donations. The aortic valve and a portion of the aorta or the pulmonic valve and a portion of the pulmonary artery are harvested and stored cryogenically. Homo-grafts are not always available and are very expensive. Homografts last for about 10 to 15 years, somewhat longer than xenografts. Homografts are not thrombogenic and are resistant to subacute bacterial endocarditis. They are used for aortic and pulmonic valve replacement.

Autografts (ie, autologous valves) are obtained byexcising the patient’s own pulmonic valve and a portion of the pulmonary artery for use as the aortic valve. Anticoagulation is un-necessary because the valve is the patient’s own tissue and is not thrombogenic. The autograft is an alternative for children (it may grow as the child grows), women of childbearing age, young adults, patients with a history of peptic ulcer disease, and those who can-not tolerate anticoagulation. Aortic valve autografts have remained viable for more than 20 years.

Most aortic valve autograft procedures are double valve-replacement procedures, because a homograft also is performed for pulmonic valve replacement. If pulmonary vascular pressures are normal, some surgeons elect not to replace the pulmonic valve. The patient can recover without a valve between the right ven-tricle and the pulmonary artery.