Acute rheumatic fever, which occurs most often in school-age children, follows 0.3% to 3% of cases of group A beta-hemolytic streptococcal pharyngitis.

Infectious Diseases of the Heart

Among the most common infections of the heart are infective en-docarditis, myocarditis, and pericarditis. The ideal management is prevention.

Acute rheumatic fever, which occurs most often in school-age children, follows 0.3% to 3% of cases of group A beta-hemolytic streptococcal pharyngitis (Chin, 2001). Prompt treatment of strep throat with antibiotics can prevent the development of rheumatic fever (Chart 29-1). The Streptococcus is spread by direct contact with oral or respiratory secretions. Although the bacteria are the causative agents, malnutrition, overcrowding, and lower socioeconomic status may predispose individuals to rheumatic fever (Beers et al., 1999). 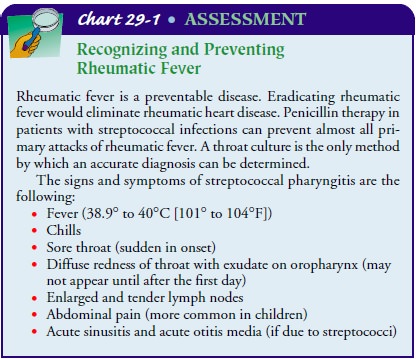 The incidence of rheumatic fever in the United States and other developed countries is believed to have steadily decreased, but the exact incidence is difficult to determine because the infection may go unrecognized and patients may not seek treatment (Braunwald et al., 2001; Beers et al., 1999). As many as 39% of patients with rheumatic fever develop various degrees of rheumatic heart disease associated with valvu-lar insufficiency, heart failure, and death (Chin, 2001). The dis-ease also affects all bony joints, producing polyarthritis. The prevalence of rheumatic heart disease is difficult to determine be-cause clinical diagnostic criteria are not standardized and autop-sies are not routinely performed. Except for rare outbreaks, the prevalence of rheumatic heart disease in the United States is be-lieved to be less than 0.05 cases per 1000 people (Chin, 2001). The number of U.S. citizens who die from rheumatic heart dis-ease declined from approximately 15,000 in 1950 to about 4,000 in 2001 (AHA, 2001).

The heart damage and the joint lesions of rheumatic endocardi-tis are not infectious in the sense that these tissues are not invaded and directly damaged by destructive organisms; rather, they rep-resent a sensitivity phenomenon or reaction occurring in response to hemolytic streptococci. Leukocytes accumulate in the affected tissues and form nodules, which eventually are replaced by scar tis-sue. The myocardium is certain to be involved in this inflamma-tory process; rheumatic myocarditis develops, which temporarily weakens the contractile power of the heart. The pericardium also is affected, and rheumatic pericarditis occurs during the acute illness. These myocardial and pericardial complications usually occur without serious sequelae. Rheumatic endocarditis, how-ever, results in permanent and often crippling side effects.

Rheumatic endocarditis anatomically manifests first by tiny translucent vegetations or growths, which resemble pinhead-sized beads arranged in a row along the free margins of the valve flaps. These tiny beads look harmless enough and may disappear with-out injuring the valve leaflets. More often, however, they have serious effects. They are the starting point of a process that grad-ually thickens the leaflets, rendering them shorter and thicker than normal and preventing them from closing completely. The result is leakage, a condition called valvular regurgitation. The most common site of valvular regurgitation is the mitral valve. In some patients, the inflamed margins of the valve leaflets become adherent, resulting in valvular stenosis, a narrowed or stenotic valvular orifice. Regurgitation and stenosis may occur in the same valve.

A few patients with rheumatic fever become critically ill with intractable heart failure, serious dysrhythmias, and pneumonia. These patients are treated in an intensive care unit. Most patients recover quickly. However, although the patient is free of symp-toms, certain permanent residual effects remain that often lead to progressive valvular deformities. The extent of cardiac damage, or even its existence, might not have been apparent in clinical ex-aminations during the acute phase of the disease. Eventually, however, the heart murmurs that are characteristic of valvular stenosis, regurgitation, or both become audible on auscultation and, in some patients, even detectable as thrills on palpation. Usually, the myocardium can compensate for these valvular de-fects very well for a time. As long as the myocardium can com-pensate, the patient remains in apparently good health. With continued valvular alterations, the myocardium is unable to com-pensate (see Fig. 29-2), as evidenced by signs and symptoms of heart failure. 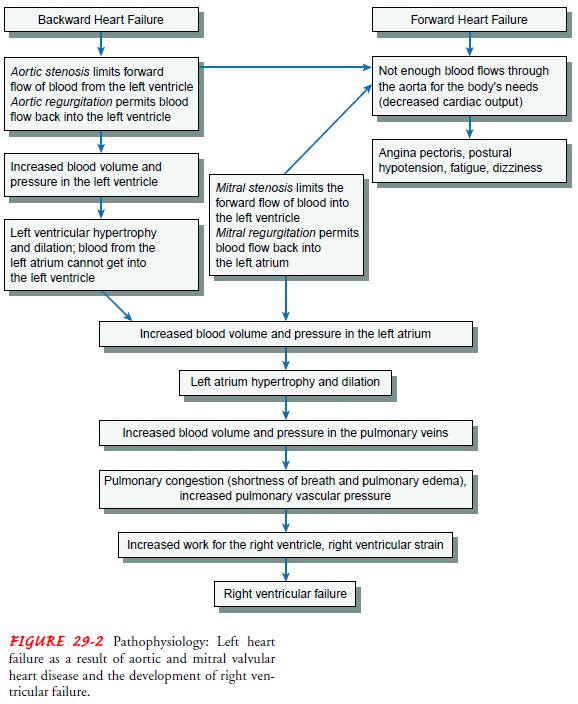 During assessment, the nurse should keep in mind that the symp-toms depend on which side of the heart is involved. The mitral valve is most often affected, producing symptoms of left-sided heart failure: shortness of breath with crackles and wheezes in the lungs. The severity of the symptoms depends on the size and location of the lesion. The systemic symptoms that are pres-ent are proportionate to the virulence of the invading organism. When a new murmur is detected in a patient with a systemic in-fection, infectious endocarditis should be suspected. The patient is also at risk for embolic phenomena of the lung (eg, recurrent pneumonia, pulmonary abscesses), kidney (eg, hematuria, renal failure), spleen (eg, left upper quadrant pain), heart (eg, myo-cardial infarction), brain (eg, stroke), or peripheral vessels.

Rheumatic endocarditis is prevented through early and adequate treatment of streptococcal infections. A first-line approach in preventing initial attacks of rheumatic endocarditis is to recog-nize streptococcal infections, treat them adequately, and control epidemics in the community. Every nurse should be familiar with the signs and symptoms of streptococcal pharyngitis: high fever (38.9°C to 40°C [101°F to 104°F]), chills, sore throat, redness of the throat with exudate, enlarged lymph nodes, abdominal pain, and acute rhinitis.

The objectives of medical management are to eradicate the causative organism and prevent additional complications, such as a thromboembolic event. Long-term antibiotic therapy is the recommended treatment, and penicillin administered parenter-ally remains the medication of choice.

The patient who has rheumatic endocarditis and whose valvu-lar dysfunction is mild may require no further treatment. Never-theless, the danger exists for recurrent attacks of acute rheumatic fever, bacterial endocarditis, embolism from vegetations or mural thrombi in the heart, and eventual cardiac failure.

A key nursing role in rheumatic endocarditis is teaching patients about the disease, its treatment, and the preventive steps needed to avoid potential complications. After acute treatment with anti-biotics, patients need to learn about the need to take prophylactic antibiotics before invasive procedures.