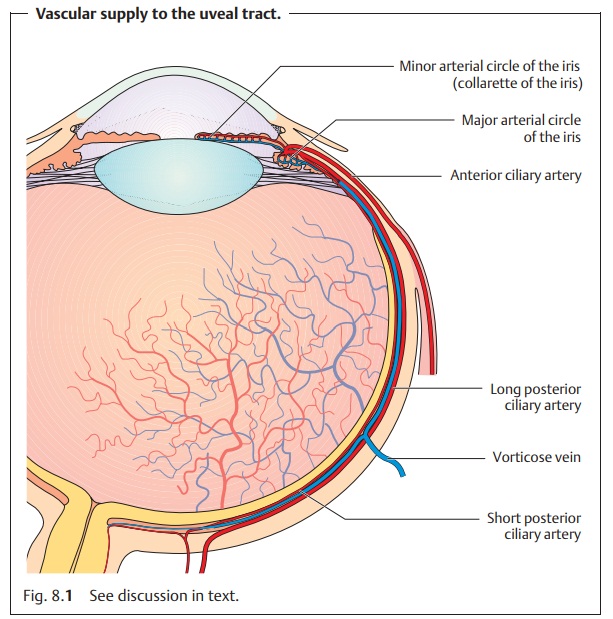 The uveal tract (also known as the vascular pigmented layer,vascular tunic, and uvea) takes its name from the Latin uva (grape) because the dark pigmentation and shape of the structure are reminiscent of a grape.

Structure: The uveal tract (also known as the vascular pigmented layer,vascular tunic, and uvea) takes its name from the Latin uva (grape) because the dark pigmentation and shape of the structure are reminiscent of a grape. The uveal tract consists of the following structures:

Position: The uveal tract lies between the sclera and retina.

❖Theshort posterior ciliary arteries enter the eyeball with the optic nerve and supply the choroid.

The anterior ciliary arteries originate from the vessels of the rectus muscles and communicate with the posterior ciliary vessels.

Venous blood drains through four to eightvorticose or vortex veinsthatpenetrate the sclera posterior to the equator and join the superior and inferior ophthalmic veins (Fig. 8.1). Sensory supply is provided by the long and shortciliary nerves. 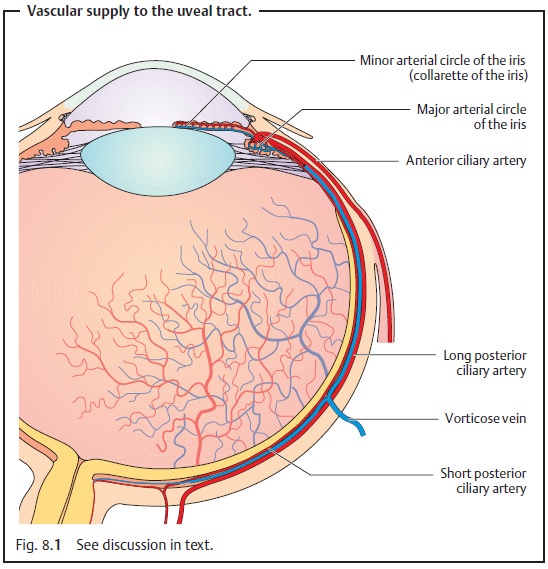 Structure and function: The iris consists of two layers:

The posterior layer is opaque and protects the eye against excessive incident light. The anterior surface of the lens and the pigmented layer are so close together near the pupil that they can easily form adhesions in inflammation.

The collarette of the iris covering the minor arterial circle of the iris divides the stroma into pupillary and ciliary portions. The pupillary portion contains the sphincter muscle, which is supplied by parasympathetic nerve fibers, and the dilator pupillae muscle, supplied by sympathetic nerve fibers. These muscles regulate the contraction and dilation of the pupil so that the iris may be regarded as the aperture of the optical system of the eye.

Pupil dilation is sometimes sluggish in preterm infants and the newborn because the dilator pupillae muscle develops relatively late.

Color: The color of the iris varies in the individual according to themelanincontent of the melanocytes (pigment cells) in thestromaandepithelial layer.Eyes with a high melanin content are dark brown, whereas eyes with less melanin are grayish-blue. Caucasians at birth always have a grayish-blue iris as the pigmented layer only develops gradually during the first year of life. Even in albinos (see impaired melanin synthesis), the eyes have a grayish-blue iris because of the melanin deficiency. Under slit lamp retroillumination they appear reddish due to the fundus reflex.

Position and structure: Theciliary bodyextends from the root of the iris tothe ora serrata, where it joins the choroid. It consists of anterior pars plicata and the posterior pars plana, which lies 3.5 mm posterior to the limbus. Numerous ciliary processes extend into the posterior chamber of the eye. The suspensory ligament, the zonule, extends from the pars plana and the inter-vals between the ciliary processes to the lens capsule.

Position and structure: The choroid is themiddle tunic of the eyeball. It isbounded on the interior by Bruch’s membrane. The choroid is highly vascu-larized, containing a vessel layer with large blood vessels and a capillary layer. The blood flow through the choroid is the highest in the entire body.