Inflammations of the uveal tract are classified according to the various por-tions of the globe:

Iritisis the most frequent form of uveitis. It usually occurs incombination with cyclitis. About three-quarters of all iridocyclitis cases have an acute clinical course.

Iridocyclitis is frequently attributable toimmunologic causessuchas allergic or hyperergic reaction to bacterial toxins. In some rheumatic dis-orders it is known to be frequently associated with the expression of specific human leukocyte antigens (HLA) such as HLA-B27. Iridocyclitis can also be a symptom of systemic disease such as ankylosing spondylitis, Reiter’s syn-drome, sarcoidosis, etc. (Table 8.1). Infections are less frequent and occur sec-ondary to penetrating trauma or sepsis (bacteria, viruses, mycosis, or para-sites). Phacogenic inflammation, possibly with glaucoma, can result when the lens becomes involved. 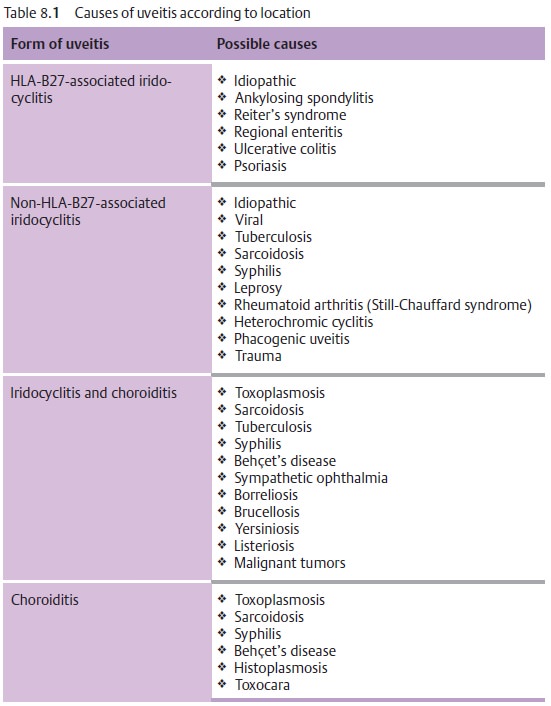 In contrast to choroiditis, acute iritis or iridocyclitis is painful because of the involvement of the ciliary nerves.

The iris is hyperemic (the iris vessels will be visible in a light-colored iris).

The structure appears diffuse and reactive miosis is present. 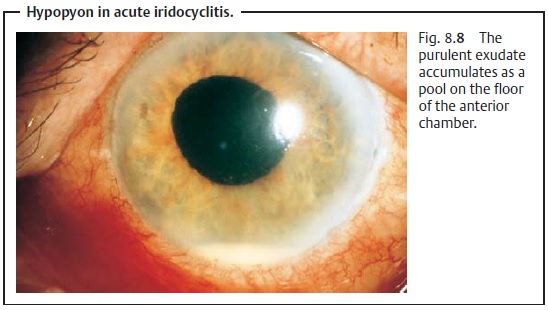 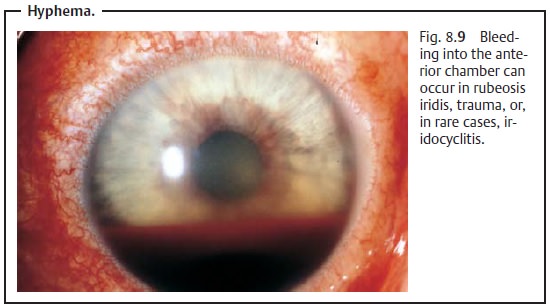 Corneal edemas and Tyndall effects (accumulations of protein in the anterior chamber) can be diagnosed when the eye is illuminated with a lateral beam of light from a focused light or slit lamp. 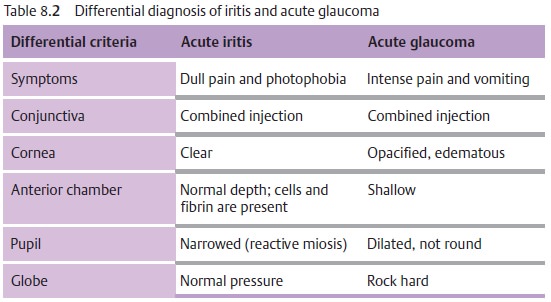 ❖ Secondary open angle glaucoma with an increase in intraocular pressure.

❖ Adhesions between the iris and posterior surface of the cornea (anterior synechiae).

❖  Adhesions between the iris and lens (posterior synechiae; Fig. 8.10). 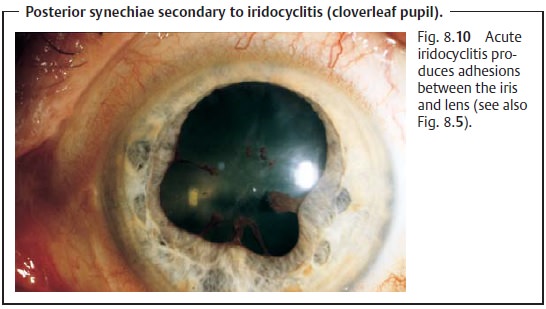 Topical and, in appropriate cases, systemic antibiotic or antiviraltherapy is indicated for iridocyclitis due to a pathogen (with a corneal ulcer, penetrating trauma, or sepsis).

A conjunctival smear, or a blood culture in septic cases, is obtained to identify the pathogen. Antibiotic therapy should begin immediately as microbiological identification of the pathogen is not always successful.

Therapeutic mydriasis in combination with steroid therapy is indicated to minimize the risk of synechiae.

Where no pathogen can be identified, high-dose topical steroid therapy (prednisolone eyedrops every hour in combination with subconjunctival injections of soluble dexamethasone) is administered. To minimize the risk of posterior synechiae, the pupil must be maximally dilated (atropine,scopolamine, cyclopentolate, and possibly epinephrine and epinephrine eye-drops).

The mydriatic effect of dilating eyedrops may be reduced in iritis. This may necessitate the use of longer-acting medications such as atropine, which may have to be applied several times daily.

Occasionally it is possible to break off existing synechiae in this manner, and patches of iris tissue will remain on the anterior surface of the lens. Second-ary open angle glaucoma is treated by administering beta blockers in eye-drop form and, in applicable cases, carbonic anhydrase inhibitors (aceta-zolamide; see Table 10.3).

Symptoms usually improve within a few days when proper ther-apy is initiated. The disorder can progress to a chronic stage.

The disorder should be distinguished from acuteglaucoma, conjunctivitis, and keratitis.

Total obliteration of the pupil by posterior synechiae isreferred to a pupillary block. Because the aqueous humor can no longer circu-late, secondary angle closure glaucoma with iris bombé occurs. Occlusion ofthe pupil also results in fibrous scarring in the pupil. This can lead to thedevelopment of posterior subcapsular opacities in the lens (secondary cata-ract). Recurrent iridocyclitis can also lead to calcific band keratopathy.

Because of the chronic recurrent course of the disorder, itfrequently involves complications such as synechiae or cataract that may progress to blindness from shrinkage of the eyeball.

There are few epidemiologic studies of choroiditis. Theannual incidence is assumed to be four cases per 100 000 people.

Patients are free of pain, although they report blurred vision andfloaters.

Choroiditis is painless as the choroid is devoid of sensory nerve fibers.

Ophthalmoscopy reveals isolated or multiplechoroiditis foci. In acute disease they appear as ill-defined white dots (Fig. 8.11). Once scarring has occurred the foci are sharply demarcated with a yellowish-brown color. Occasionally the major choroidal vessels will be vis-ible through the atrophic scars.

No cells will be found in the vitreous body in aprimary choroidal process.However, inflammation proceeding from the retina (retinochoroiditis) will exhibit cellular infiltration of the vitreous body.

This disorder should be distinguished from retinalinflammations, which are accompanied by cellular infiltration of the vitreous body and are most frequently caused by viruses or Toxoplasma gondii.

Choroiditis is treated either with antibiotics or steroids, depend-ing on its etiology.

The inflammatory foci will heal within two to six weeks and formchorioretinal scars. The scars will result in localized scotomas that will reduce visual acuity if the macula is affected.

Specific bilateral inflammation of the uveal tract due to chronic irritation of one eye, caused by a perforating wound to the eye or intraocular surgery, produces transferred uveitis in the fellow eye.

Sympathetic uveitis can occur in anotherwise unaffected eyeevenyears after penetrating injuries or intraocular surgery in the fellow eye, especially where there was chronic irritation. Tissues in the injured eye (uveal tract, lens, and retina) act as antigens and provoke an autoimmune dis-order in the unaffected eye.

The earliest symptoms include limited range of accommodationand photophobia. Later there is diminished visual acuity and pain.

Clinical symptoms include combined injections,cells and protein in the anterior chamber and vitreous body, papillary and ret-inal edema, and granulomatous inflammation of the choroid.

The disorder should be distinguished from iridocycli-tis and choroiditis from other causes (see Table 8.1).

The injured eye, which is usually blind, must be enucleated toeliminate the antigen. High-dose topical and systemic steroid therapy is indi-cated. Concurrent treatment with immunosuppressives (cyclophosphamide and azathioprine) may be necessary.

The disorder has a chronic clinical courseand may involve severe complications of uveitis such as secondary glaucoma,

secondary cataract, retinal detachment, and shrinkage of the eyeball. Sympa-thetic ophthalmia can lead to blindness in particularly severe cases.