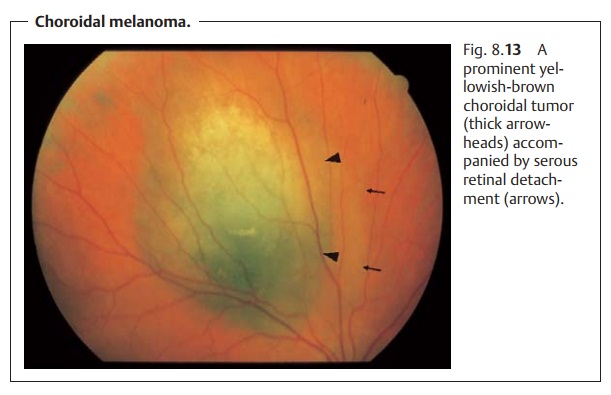 With an incidence of one per ten thousand, malignant uveal melanoma is the most common primary intraocular tumor.

With an incidence of one per ten thousand, malignant uveal melanoma is the most common primary intraocular tumor. It usually occurs as a choroidal melanoma, and is almost always unilateral. Tumors in the iris are detected earlier than tumors located in the ciliary body and choroid (Fig. 8.13). 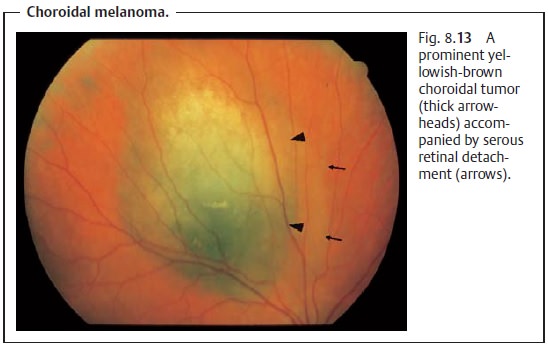 ❖ Iris melanomas: These tumors areoften initially asymptomatic.However,metastatic melanoma cells in the angle of the anterior chamber can lead to secondary glaucoma. Circumscribed iris melanomas are removed by seg-mental iridectomy.

❖ Choroidal melanomas: These tumors become clinically symptomaticwhen involvement of the macula reduces visual acuity or the patient notices a shadow in his or her field of vision as a result of the tumor and the accompanying retinal detachment. The diagnosis is confirmed with the aid of transillumination, ultrasound, and fluorescein angiography. Choroidal tumors are treated with radioactive isotopes delivered by plaques of radioactive material (brachytherapy). Enucleation is indicated for tumors whose diameter exceeds 8 mm and whose prominence exceeds 5 mm.

❖ Uveal metastases most frequently develop from carcinomas of the breastor lung. They are usually flat with little pigmentation.