Using clone( ) and the Cloneable Interface

Most of the methods defined by Object are discussed elsewhere in this book. However, one deserves special attention: clone( ).

Using clone( ) and the Cloneable Interface

Most of the methods defined by Object are discussed elsewhere in this book. However, one deserves special attention: clone( ). The clone( ) method generates a duplicate copy of the object on which it is called. Only classes that implement the Cloneable interface can be cloned.

The Cloneable interface defines no members. It is used to indicate that a class allows a bitwise copy of an object (that is, a clone) to be made. If you try to call clone( ) on a class that does not implement Cloneable, a CloneNotSupportedException is thrown. When a clone is made, the constructor for the object being cloned is not called. As implemented by Object, a clone is simply an exact copy of the original.

Cloning is a potentially dangerous action, because it can cause unintended side effects. For example, if the object being cloned contains a reference variable called obRef, then when the clone is made, obRef in the clone will refer to the same object as does obRef in the 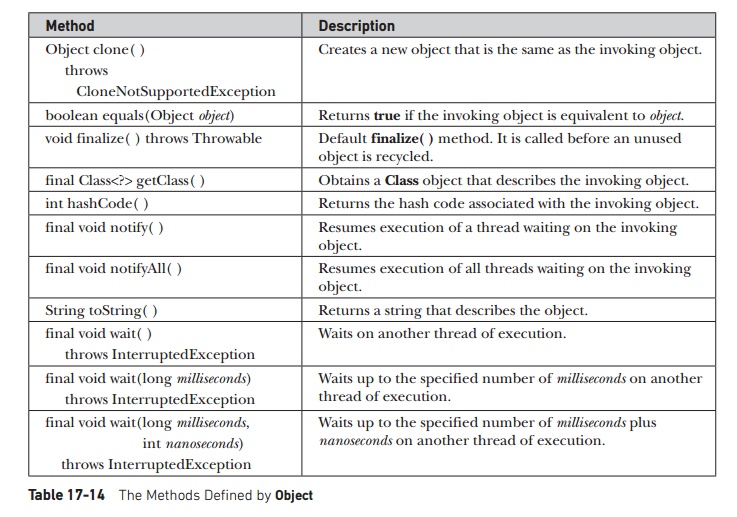 original. If the clone makes a change to the contents of the object referred to by obRef, then it will be changed for the original object, too. Here is another example: If an object opens an I/O stream and is then cloned, two objects will be capable of operating on the same stream. Further, if one of these objects closes the stream, the other object might still attempt to write to it, causing an error. In some cases, you will need to override the clone( ) method defined by Object to handle these types of problems.

Because cloning can cause problems, clone( ) is declared as protected inside Object. This means that it must either be called from within a method defined by the class that implements Cloneable, or it must be explicitly overridden by that class so that it is public. Let’s look at an example of each approach.

The following program implements Cloneable and defines the method cloneTest( ), which calls clone( ) in Object:

Here, the method cloneTest( ) calls clone( ) in Object and returns the result. Notice that the object returned by clone( ) must be cast into its appropriate type (TestClone).

The following example overrides clone( ) so that it can be called from code outside of its class. To do this, its access specifier must be public, as shown here:

// clone() is now overridden and is public.

The side effects caused by cloning are sometimes difficult to see at first. It is easy to think that a class is safe for cloning when it actually is not. In general, you should not implement Cloneable for any class without good reason.