Consider a home computer system. This will probably have only one active user at a time, but that user might be running a number of applications simultaneously.

A typical example of this happens when surfing the Web and checking e-mail. You may have an e-mail client downloading your e-mail while at the same time your browser is rendering a web page in the background. Although these applications will uti-lize multiple threads, they do not tend to require much processor time; their perform-ance is typically dominated by the time it takes to download mail or web pages from remote machines. For these applications, even a single-core processor often provides suf-ficient processing power to produce a good user experience. However, a single-core processor can get saturated if the e-mail client is indexing mail while an animation-heavy web page is being displayed.

In fact, these applications will probably already take advantage of multiple threads. Figure 3.1 shows a newly opened instance of Mozilla Firefox launching 20 threads. A consequence of this is that just by having a multicore processor, the performance of the system will improve because multiples of those threads can be executed simultaneouslyâ€” and this requires no change to the existing applications.

Alternatively, there are a number of tasks we perform on our personal computer sys-tems that are inherently compute intensive, such as playing computer games, encoding audio for an MP3 player, transforming one video format into another suitable for burn-ing to DVD, and so on. In these instances, having multiple cores can enable the work to take less time by utilizing additional cores or can keep the system responsive while the task is completed in the background.

Figure 3.2 shows the system stack when a single user runs multiple applications on a system. 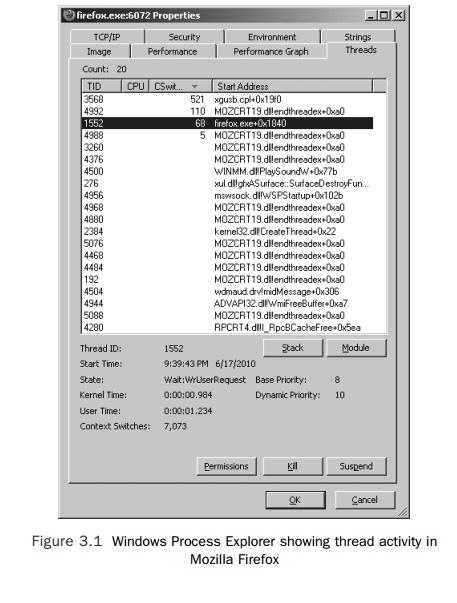 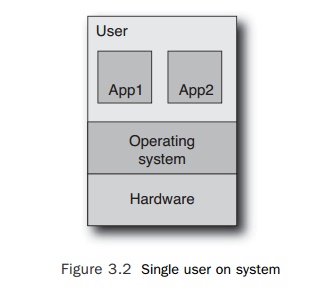 It is also possible to have multiple users in a home environment. For example, on Windows, it is quite possible for one user to be logged in and using the computer while another user, having logged in earlier, has set some other applications running. For example, you may have left some DVD-authoring package running in the background while another user logs into their account to check their e-mail.