As discussed earlier in the chapter, the easiest way of utilizing a CMT system is to perform many independent tasks.

As discussed earlier in the chapter, the easiest way of utilizing a CMT system is to perform many independent tasks. In this case, the limit to the number of independent tasks is determined by resources that are external to those tasks. A web server might require a large memory footprint for caching recently used web pages in memory. A database server might require large amounts of disk I/O. These requirements would place load on the system and on the operating system, but there would be no synchronization con-straints between the applications running on the system. 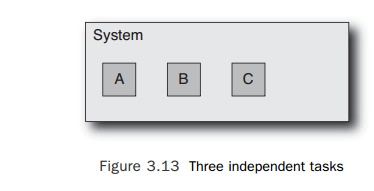 An example of this kind of usage would be consolidation of multiple machines down to a single machine. This consolidation might just be running the web server, e-mail server, and so on, on the same machine or might involve some form of virtualization where different tasks are isolated from each other.

This approach is very common but not terribly interesting from a parallelization strat-egy since there is no communication between the components. Such an approach would increase the utilization of the machine and could result in space or power savings but should not be expected to lead to a performance change (except that which is attained from the intrinsic differences in system performance).

One place where this strategy is common is in cluster, grid, or cloud computing. Each individual node (that is, system) in the cloud might be running a different task, and the tasks are independent. If a task fails (or a node fails while completing a task), the task can be retried on a different node. The performance of the cloud is the aggregate throughput of all the nodes.

What is interesting about this strategy is that because the tasks are independent, per-formance (measured as throughput) should increase nearly linearly with the number of available threads.