When a processor requests a set of bytes from memory, it does not get only those bytes that it needs. When the data is fetched from memory, it is fetched together with the sur-rounding bytes as a cache line, as shown in Figure 1.12.

When a processor requests a set of bytes from memory, it does not get only those bytes that it needs. When the data is fetched from memory, it is fetched together with the sur-rounding bytes as a cache line, as shown in Figure 1.12. Depending on the processor in a system, a cache line might be as small as 16 bytes, or it could be as large as 128 (or more) bytes. A typical value for cache line size is 64 bytes. Cache lines are always aligned, so a 64-byte cache line will start at an address that is a multiple of 64. This design decision simplifies the system because it enables the system to be optimized to pass around aligned data of this size; the alternative is a more complex memory interface that would have to handle chunks of memory of different sizes and differently aligned start addresses. 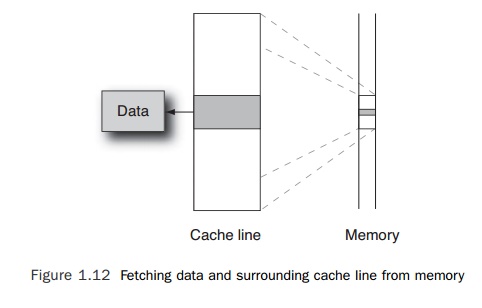 When a line of data is fetched from memory, it is stored in a cache. Caches improve performance because the processor is very likely to either reuse the data or access data stored on the same cache line. There are usually caches for instructions and caches for data. There may also be multiple levels of cache.

The reason for having multiple levels of cache is that the larger the size of the cache, the longer it takes to determine whether an item of data is held in that cache. A proces-sor might have a small first-level cache that it can access within a few clock cycles and then a second-level cache that is much larger but takes tens of cycles to access. Both of these are significantly faster than memory, which might take hundreds of cycles to access. The time it takes to fetch an item of data from memory or from a level of cache is referred to as its latency. Figure 1.13 shows a typical memory hierarchy.

The greater the latency of accesses to main memory, the more benefit there is from multiple layers of cache. Some systems even benefit from having a third-level cache.

Caches have other characteristics, which are less obviously visible and have less of a directly measurable impact on application performance. The one characteristic that it is worth mentioning is the associativity. In a simple cache, each cache line in memory would map to exactly one position in the cache; this is called a direct mapped cache. If we take the simple 4KB cache outlined earlier, then the cache line located at every 4KB interval in memory would map to the same line in the cache, as shown in Figure 1.14.

Obviously, a program that accessed memory in 4KB strides would end up just using a single entry in the cache and could suffer from poor performance if it needed to simul-taneously use multiple cache lines.

The way around this problem is to increase the associativity of the cache—that is, make it possible for a single cache line to map into more positions in the cache and therefore reduce the possibility of there being a conflict in the cache. In a two-way associative 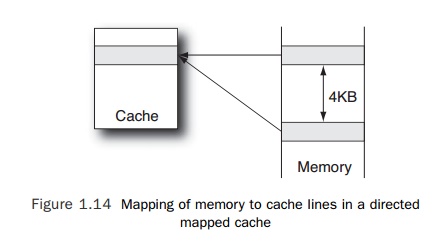 cache, each cache line can map into one of two locations. The location is chosen accord-ing to some replacement policy that could be random replacement, or it could depend on which of the two locations contains the oldest data (least recently used replacement). Doubling the number of potential locations for each cache line means that the interval between lines in memory that map onto the same cache line is halved, but overall this change will result in more effective utilization of the cache and a reduction in the num-ber of cache misses. Figure 1.15 shows the change. 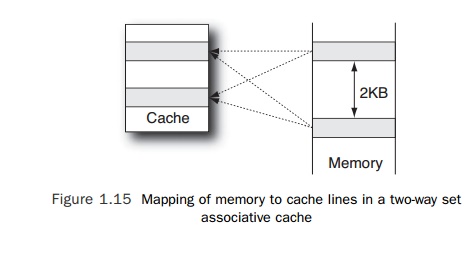 A fully associative cache is one where any address in memory can map to any line in the cache. Although this represents the approach that is likely to result in the lowest cache miss rate, it is also the most complex approach to implement; hence, it is infrequently implemented.

On systems where multiple threads share a level of cache, it becomes more important for the cache to have higher associativity. To see why this is the case, imagine that two copies of the same application share a common direct-mapped cache. If each of them accesses the same virtual memory address, then they will both be attempting to use the same line in the cache, and only one will succeed. Unfortunately, this success will be short-lived because the other copy will immediately replace this line of data with the line of data that they need.