The core of a processor is the part of the chip responsible for executing instructions. The core has many parts, and we will discuss some of those parts in detail later in this chapter.

The core of a processor is the part of the chip responsible for executing instructions. The core has many parts, and we will discuss some of those parts in detail later in this chapter. A simplified schematic of a processor might look like Figure 1.3.

Cache is an area of memory on the chip that holds recently used data and instructions. When you look at the piece of silicon inside a processor, such as that shown in Figure 1.7, the core and the cache are the two components that are identifiable to the eye. We will discuss cache in the “Caches” section later in this chapter.

The simplest way of enabling a chip to run multiple threads is to duplicate the core multiple times, as shown in Figure 1.4. The earliest processors capable of supporting mul-tiple threads relied on this approach. This is the fundamental idea of multicore proces-sors. It is an easy approach because it takes an existing processor design and replicates it. There are some complications involved in making the two cores communicate with each other and with the system, but the changes to the core (which is the most complex part of the processor) are minimal. The two cores share an interface to the rest of the system, which means that system access must be shared between the two cores. 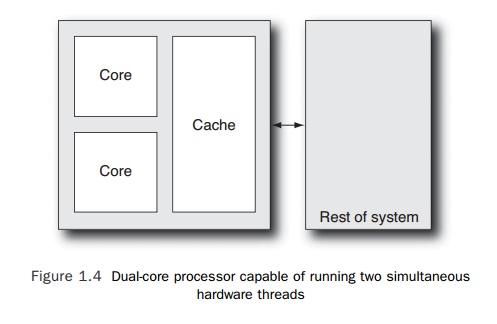 However, this is not the only approach. An alternative is to make a single core execute multiple threads of instructions, as shown in Figure 1.5. There are various refinements on this design:

The core could execute instructions from one software thread for 100 cycles and then switch to another thread for the next 100.

The core could simultaneously fetch an instruction from each of multiple threads every cycle.

The core could switch software threads every time the stream that is currently executing hits a long latency event (such as a cache miss, where the data has to be fetched from memory).

Most multicore processors use a combination of multiple cores and multiple threads per core. The simplest example of this would be a processor with two cores with each core being capable of supporting two threads, making a total of four threads for the entire processor. Figure 1.6 shows this configuration.

When this ability to handle multiple threads is exposed to the operating system, it usually appears that the system has many virtual CPUs. Therefore, from the perspective of the user, the system is capable of running multiple threads. One term used to describe this is chip multithreading (CMT)—one chip, many threads. This term places the emphasis on the fact that there are many threads, without stressing about the implementation details of how threads are assigned to cores. 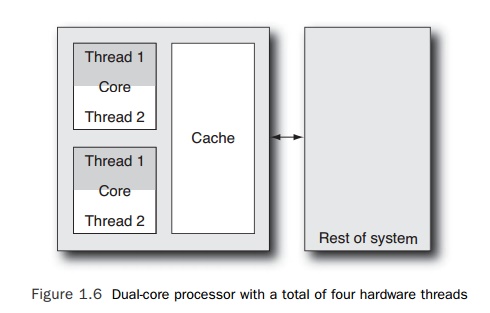 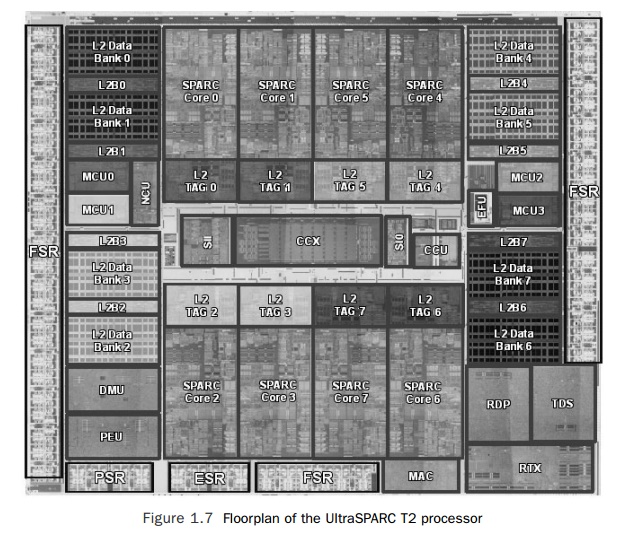 The UltraSPARC T2 floor plan has a number of different areas that offer support functionality to the cores of the processor; these are mainly located around the outside edge of the chip. The eight processor cores are readily identifiable because of their struc-tural similarity. For example, SPARC Core 2 is the vertical reflection of SPARC Core 0, which is the horizontal reflection of SPARC Core 4. The other obvious structure is the crosshatch pattern that is caused by the regular structure elements that form the second-level cache area; this is an area of on-chip memory that is shared between all the cores. This memory holds recently used data and makes it less likely that data will have to be fetched from memory; it also enables data to be quickly shared between cores.

It is important to realize that the implementation details of CMT processors do have detectable effects, particularly when multiple threads are distributed over the system. But the hardware threads can usually be considered as all being equal. In current processor designs, there are not fast hardware threads and slow hardware threads; the performance of a thread depends on what else is currently executing on the system, not on some invariant property of the design.

For example, suppose the CPU in a system has two cores, and each core can support two threads. When two threads are running on that system, either they can be on the same core or they can be on different cores. It is probable that when the threads share a core, they run slower than if they were scheduled on different cores. This is an obvious result of having to share resources in one instance and not having to share resources in the other.

Fortunately, operating systems are evolving to include concepts of locality of memory and sharing of processor resources so that they can automatically assign work in the best possible way. An example of this is the locality group information used by the Solaris oper-ating system to schedule work to processors. This information tells the operating system which virtual processors share resources. Best performance will probably be attained by scheduling work to virtual processors that do not share resources.

The other situation where it is useful for the operating system to understand the topology of the system is when a thread wakes up and is unable to be scheduled to exactly the same virtual CPU that was running it earlier. Then the thread can be sched-uled to a virtual CPU that shares the same locality group. This is less of a disturbance than running it on a virtual processor that shares nothing with the original virtual processor. For example, Linux has the concept of affinity, which keeps threads local to where they were previously executing.

This kind of topological information becomes even more important in systems where there are multiple processors, with each processor capable of supporting multiple threads. The difference in performance between scheduling a thread on any of the cores of a sin-gle processor may be slight, but the difference in performance when a thread is migrated to a different processor can be significant, particularly if the data it is using is held in memory that is local to the original processor. Memory affinity will be discussed further in the section “The Characteristics of Multiprocessor Systems.”

In the following sections, we will discuss the components of the processor core. A rough schematic of the critical parts of a processor core might look like Figure 1.8. This 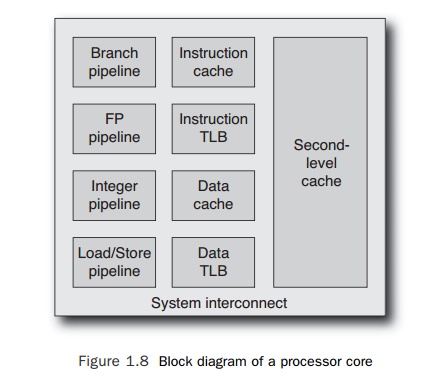 shows the specialized pipelines for each instruction type, the on-chip memory (called cache), the translation look-aside buffers (TLBs) that are used for converting virtual mem-ory addresses to physical, and the system interconnect (which is the layer that is responsi-ble for communicating with the rest of the system).

The next section, “Increasing Instruction Issue Rate with Pipelined Processor Cores,” explains the motivation for the various “pipelines” that are found in the cores of modern processors. Sections “Using Caches to Hold Recently Used Data,” “Using Virtual Memory to Store Data,” and “Translating from Virtual Addresses to Physical Addresses” in this chapter cover the purpose and functionality of the caches and TLBs.