The Differences Between Processes and Threads

It is useful to discuss how software is made of both processes and threads and how these are mapped into memory.

The Differences Between Processes and Threads

It is useful to discuss how software is made of both processes and threads and how these are mapped into memory. This section will introduce some of the concepts, which will become familiar over the next few chapters. An application comprises instructions and data. Before it starts running, these are just some instructions and data laid out on disk, as shown in Figure 1.21.

An executing application is called a process. A process is a bit more than instructions and data, since it also has state. State is the set of values held in the processor registers, the address of the currently executing instruction, the values held in memory, and any other values that uniquely define what the process is doing at any moment in time. The important difference is that as a process runs, its state changes. Figure 1.22 shows the lay-out of an application running in memory. 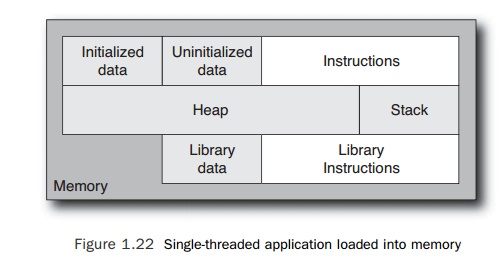 Processes are the fundamental building blocks of applications. Multiple applications running simultaneously are really just multiple processes. Support for multiple users is typically implemented using multiple processes with different permissions. Unless the process has been set up to explicitly share state with another process, all of its state is pri-vate to the process—no other process can see in. To take a more tangible example, if you run two copies of a text editor, they both might have a variable current_line, but neither could read the other one’s value for this variable.

A particularly critical part of the state for an application is the memory that has been allocated to it. Recall that memory is allocated using virtual addresses, so both copies of the hypothetical text editor might have stored the document at virtual addresses 0x111000 to 0x11a000. Each application will maintain its own TLB mappings, so identi-cal virtual addresses will map onto different physical addresses. If one core is running these two applications, then each application should expect on average to use half the TLB entries for its mappings—so multiple active processes will end up increasing the pressure on internal chip structures like the TLBs or caches so that the number of TLB or cache misses will increase.

Each process could run multiple threads. A thread has some state, like a process does, but its state is basically just the values held in its registers plus the data on its stack. Figure 1.23 shows the memory layout of a multithreaded application.

A thread shares a lot of state with other threads in the application. To go back to the text editor example, as an alternative implementation, there could be a single text editor application with two windows. Each window would show a different document, but the 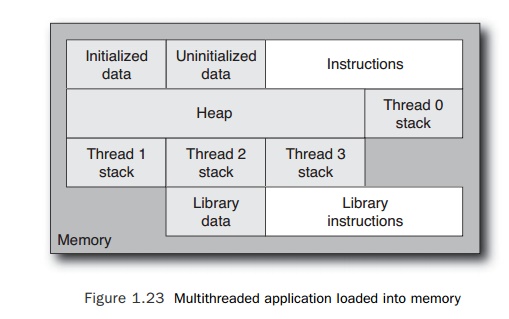 two documents could no longer both be held at the same virtual address; they would need different virtual addresses. If the editor application was poorly coded, activities in one window could cause changes to the data held in the other.

Multiple threads have advantages in low costs of sharing data between threads—one thread can store an item of data to memory, and that data becomes immediately visible to all the other threads in that process. The other advantage to sharing is that all threads share the same TLB and cache entries, so multithreaded applications can end up with lower cache miss rates. The disadvantage is that one thread failing will probably cause the entire application to fail.

The same application can be written either as a multithreaded application or as a multiprocess application. A good example is the recent changes in web browser design. Google’s Chrome browser is multiprocess. The browser can use multiple tabs to display different web pages. Each tab is a separate process, so one tab failing will not bring down the entire browser. Historically, browsers have been multithreaded, so if one thread exe-cutes bad code, the whole browser crashes. Given the unconstrained nature of the Web, it seems a sensible design decision to aim for robustness rather than low sharing costs.