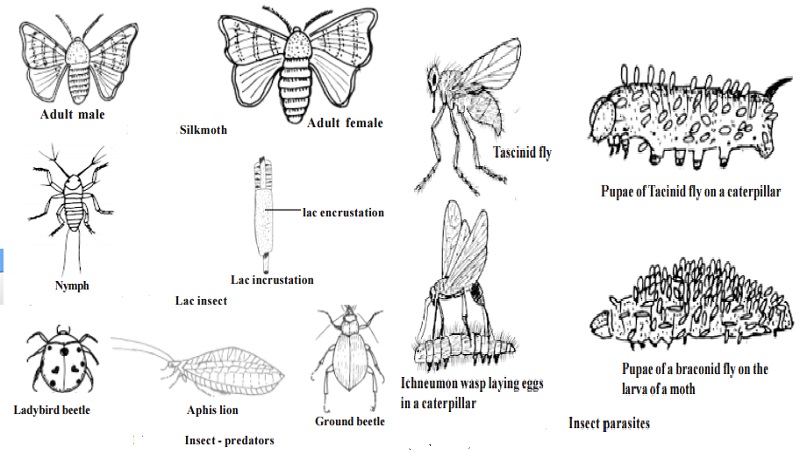 These insects produce certain substances which are useful to humans. The important useful insect products are Honey, Silk and Lac. 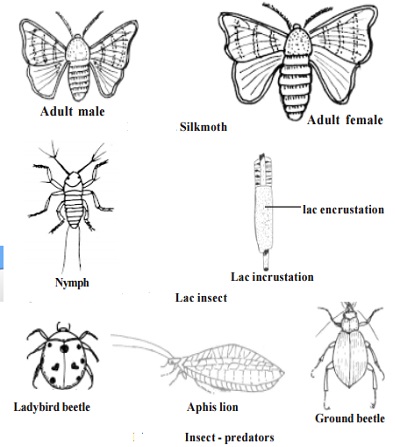 Honey bees are social insects. They live as colonies. They are active throughout the year. They feed on the pollen and nectar of flowers. In India there are four different varieties of honey bees. Of these, only three species are useful in collecting honey.

1.   Apis dorsata (Rock bee). This is the largest of the Indian honey bees. It produces plenty of honey. It builds large open single combs which may often be four feet long on tall forest trees. It is not possible to domesticate them for the bee keeping industry.

2.  Apis florea : This is the smallest of the three species and is known as the little bee. It builds single combs, which are very small. They are found hanging from bushes and corners of roof.

3.  Apis indica : This is the common Indian honey bee. Its size is intermediate between A. dorsata and A. florea. This bee builds several parallel combs, generally in hollows of trees, on the walls, inside wells, caves and similar protected spots. This is the only Indian honey bee capable of domestication.

The honeybees collect nectar from various flowers. The nectar is swallowed by the bees. In its stomach due to the action of enzymes certain changes happen to the nectar. Later in the bee hive it is regurgitated and stored in chambers as honey.

Apiculture or Bee keeping is the technique of rearing honey bees for honey and wax from their comb or beehives.

Uses of Honey and Bees wax

Honey has a high nutritive value. Its colour and smell varies in accordance with the nectar collected from different flowers.

It is estimated that 200g of honey provides as much nourishment as 11.5 litres of milk or 1.6kg cream or 330g meat. One gram of honey provides approxmately 33k.cal of energy. Honey has laxative, antiseptic and sedative charcteristics. It is used in Ayurvedic and Unani systems of medicines. It is helpful in building up the haemoglobin of the blood. It prevents cough, cold, and fever. It cures ulcers on tongue and alimentary canal. It is also used in the preparation of bread, cakes and biscuits.

Beeswax is also a natural secretion of the worker bee from the glands located in the abdomen. It is used in the manufacture of cosmetics, face creams,

paints, ointments, insulators, plastic works, polishes, carbon paper and many other lubricants. It is also used in microtomy for block preparation of tissues.

Silk is another valuable product from the insect world. The silk is ob-tained as fine threads from the cocoons of various species of silkworms. Seri-culture is the scientific management of production and marketing of natural silk from silkworms.

1.  Mulberry silkworm - Bombyx mori : This is a completely domesticated insect. Since the natural food of this worm is mulberry leaves, it is called mulberry silk worm. The silk produced by this moth is white in colour. It is called the mulberry silk.

This caterpillar feeds on ber, oak, sal and fig plants. The cocoon pro-duced by this worm is smooth and hard. It is of hen's egg size. The cocoon yields reelable, brown coloured Tasar silk.

3.   Muga Silk worm: Antheraea assamensis: The native place of this spe-cies is Assam where it has now become a good source of cottage industry. The silk produced by this moth is known as Muga silk.

The caterpillar of this worm feeds on castor leaves. The cocoons of this worm have very loose texture and the silk produced is called as Arandi silklocally. The threads are not glossy but much durable.

The sericulture plays a significant role in the rural economy of our country. The Chinese have the credit of discovering silk. It was kept as a

secret for several centuries. India now occupies a unique position in the world for its rich sericigenous fauna to produce pure mulberry silk as well as the three other varieties of non-mulberry silks.

The raw silk is used in the manufacture of woven materials, knitted fabrics and garments. It is also used in parachutes, parachute cords, fishing lines, as sieves in flour mills, insulation coil for telephones and wireless receivers, and tyres of racing cars.

Another useful product we get from insects is lac. Lac is the resinous protective secretion produced by a kind of scale insect called Laccifer lacca. They secrete a brown resinous substance called the lac. The minute red coloured larva of this insect, settles on succulent shoots of the host plants. While growing they secrete a resinous material which covers them. The twigs are harvested and the encrustations scraped, dried and processed to yield the lac of commerce.

The important trees needed for lac encrustation are the kusum, the Ber, Palas, Babul and sal. These trees are common in the western ghats.

Lac is one of the most versatile natural resinous material. It has a unique combination of properties which render it useful in the plastics, electrical, adhesive, leather, wood finishing and other industries. In the electrical industry it used in the form of insulating varnishes and moulded insu-lators. It possesses very good adhesion to mica. It is an ingredient of varnishes, polishes, finishes wood used for protective and decorative purposes. It 190

is a principal ingredient of sealing wax . It is also used in the manufacture of glazed paper, printing and water proof inks, nail polishes, den-tal plates, ammunition, bangles, wax crayons and optical frames. 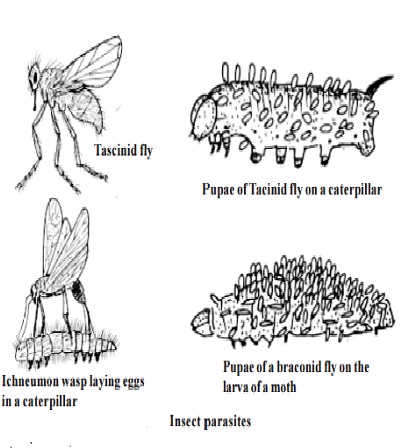 This category of insects includes all forms which by their life activities help man in controlling the plant and animal pests. The most important of these helpful insects are the insect feeding or entomopha-gous forms including predators and parasites. These are important in main-taining a balance in insect populations.

These are generally larger than their prey. They can pounce upon and devour the prey easily. Among the insect predators, lady bird beetles are more useful to the farmers and gardeners. These small beetles are voracious and are highly prolific and long-lived. Both larvae and adults feed on a wide range of insects. Other common and well known predators are Aphis lions and ground beetles.

Insect parasites are smaller than their hosts. They live continuously for atleast a part of their lifecycle on or within the body of the host. The tachinid flies parasitize caterpillars, beetles and other groups of insects. The braconids are a large group of small wasp-like insects that parasitize a wide range of insects including plant lice and caterpillars. Most group of insects are plagued by ichneumon parasites.

Employing insect predators and parasites for controlling the popula-tion of insect pests is known as biological control.

Insects play an important role in the pollination of plants. Bees, wasps, ants, butterflies, beetles and thrips render valuable service in pollination. The services of honey bees are needed in the production of cultivated crops, such as apples, pears, plums and vegetables. Some plants like the yucca and smyrna fig are completely dependent upon insects for pollination.

A number of insects feed on plants and they may aid in keeping plant weeds under control. The most successful use of an insect in the control of a plant was the introduction of the caterpillar of a moth (cactoblastis cactorum) to control the prickly pear (Opuntia spp) in Australia.