The nutrients which have been prepared by digestion are absorbed (ie taken up through the walls of the stomach and intestines) and passed directly or indirectly into the blood.

The nutrients which have been prepared by digestion are absorbed (ie taken up through the walls of the stomach and intestines) and passed directly or indirectly into the blood. The small intestine is the chief area where absorption of the nutrients take place. Water, however, is largely absorbed in the large intestine.

There are two separate pathways by which the various nutrients reach the general bloodstream of the body:

·              Nitrogenous nutrients together with sugars, salts and water are taken into the blood mainly in the walls of the small intestine. They are then carried by a large blood vessel, the portal vein (fig 2.13 PV), to the liver and are to some extent acted upon by that organ before they reach the general bloodstream of the body through the veins leaving the liver (fig 2.13 HV). This special system is known as the portal circulation. In addition to other important functions the liver has to store the sugars and prepare them for further use in the body. Any substances (including poisons) absorbed from the gut must thus pass via the bloodstream to the liver, where they could (as in the case of poisons) damage the liver, or be modified by it. 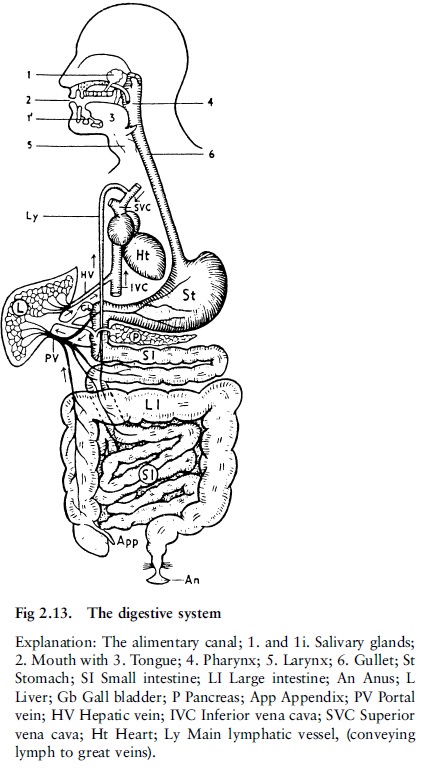 ·              Fats, on the other hand, are taken up by the lymphatic vessels of the small intestine and pass through these to veins and so to the general circulation (fig 2.15).

Both pathways of absorption are shown in fig 2.15. A further description of the portal circulation and of the lymphatic vessels will be found in the next section. 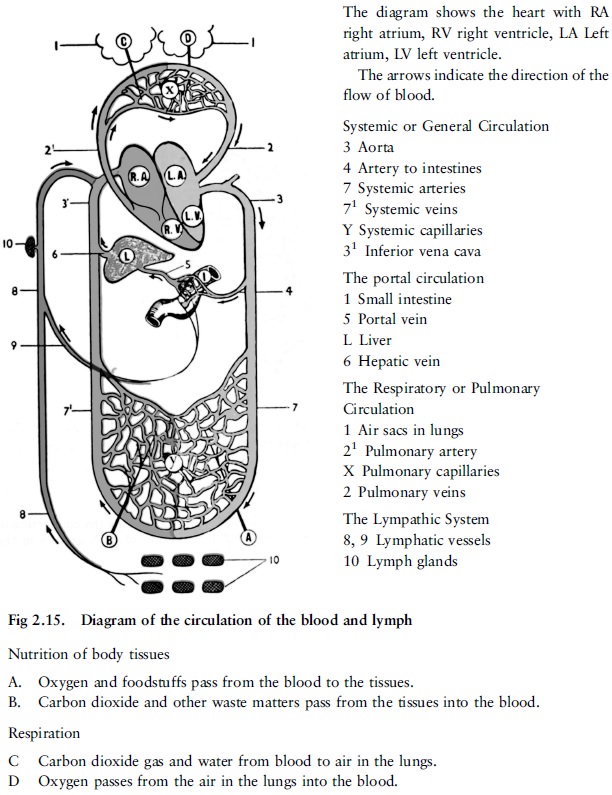 The body is a living ``machine'' and its living structures or tissues make use of the nutritional substances and oxygen in order to:

In a steam engine coal and oxygen from the air are used similarly to produce heat, which in turn result in useful activity. In the body there is less active ``burning'' or oxidation of nutritional substances which are absorbed in the lungs and blood. In both cases energy is produced in the form of heat, resulting in activity. The burning of coal in the engine converts the coal into smoke and ash. So too the activity of bodily tissues in consequence of oxidation and the conversion of food produce certain waste material of which the body must rid itself.

The most important of these waste materials are: