Laser telemetric system is a non-contact gauge that measures with a collimated laser beam. It measures at the rate of 150 scans per second. It basically consists of three components, a transmitter, a receiver and processor electronics. The transmitter module produces a collimated parallel scanning laser beam moving at a high constant, linear speed. The scanning beam appears a red line. The receiver module collects and photoelically senses the laser light transmitted past the object being measured. The processor electronics takes the received signals to convert them 10 a convenient form and displays the dimension being gauged. The transmitter contains a low power helium-neon gas laser and its power supply, a specially designed collimating lens, a synchronous motor, a multi faceted reflector prism, a synchronous pulse photo detector and a protective replaceable window. The high speed of scanning permits on line gauging and thus it is possible to detect changes in dimensions when components are moving on a continuous product such as in rolling process moving at very high speed. There is no need of waiting or product to cool for taking measurements. This system can also be applied on production machines and control then with closed feedback loops. Since the output of this system is available in digital form, it can run a process controller limit alarms can be provided and output can be taken on digital printer. 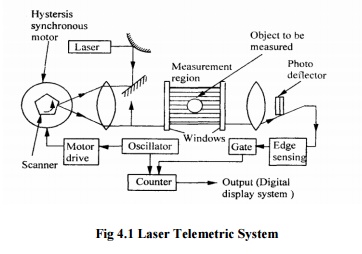 These can measure distances from I to 2in with accuracy of the order of 0. 1 to 1% of the measuring range When the light emitted by laser or LED hits an object, scatter and some of this scattered light is seen by a position sensitive detector or diode array. If the distance between the measuring head and the object changes. The angle at which the light enters the detector will also change. The angle of deviation is calibrated in terms of distance and output is provided as 0-2OmA. Such instruments are very reliable because there are no moving parts their response time is milliseconds. The measuring system uses two distance meters placed at equal distance on either side of the object and a control unit to measure the thickness of an object. The distance meter is focused at the centre of the object. 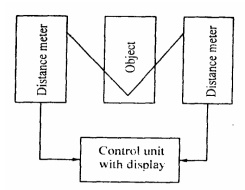 Fig shows a schematic diagram of a scanning laser gauge. It consist of transmitter, receives and processor electronics. A thin band of scanning laser light is made to pass

through a linear scanner lensbjectplacedtoina parallelrender i beam, casts a time dependent shadow. Signal from the light entering the photocell

(receiver) arc proc by a microprocessor to provide display of the dimension represented by the time difference between the shadow edges. It can provide results to an accuracy of0.25 for 10—50mm diameter objects. It can be used for objects 0.05mm to 450mm diameter; and offers repeatability of 0.1µm 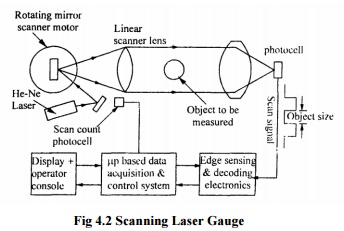 The system comprises of laser source, imaging optics. Photo-diode array. Signal processor and display unit. For large parts, two arrays in which one for each edge are used. Accuracies as high as 0.05 µm have been achieved.

These are used to measure small gaps and small diameter parts. A parallel coherent laser beam is diffracted by a small part and a lens on a linear diode array focuses the resultant pattern. Its use is restricted to small wires. The measurement accuracy is more for smaller parts. The distance between the alternating light and dark hands in the diffraction pattern is a (tired function of the wile diameter, wavelength of laser beam and the focal length of the lens. 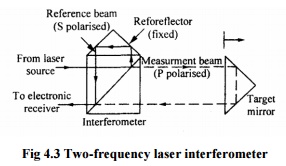 The two-frequency laser head provides one frequency with P-polarization and another frequency with S-polarization. The laser beam is split at the polarizing beam splitter into its two separate frequencies. The measuring beam is directed through the interferometer to reflect off a target mirror or retro reflector attached to the object to be measured. The reference beam is reflected from fixed retro reflector. The measurement beam on its return path recombines with the reference beam and is directed to the electronic receiver.

· Gauging wide diameter from the diffraction pattern formed in a laser

Figure shows a method of measuring the diameter of thin wire using the interference fringes resulting from diffraction of the light by the wire in the laser beam. A measure of the diameter can be obtained by moving the photo detector until the output is restored to its original value. Variation in wire diameter as small as 0.2% over wire diameter from 0.005 to 0.2mm can be measured. 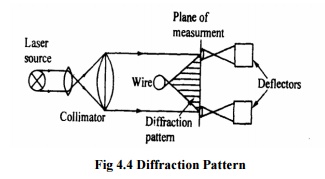 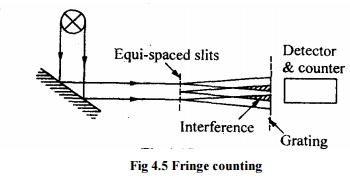 The spacing between the slits and distance of the slit to the plane of the grating depend on the wavelength of the light used.