The measurements, inspection of parts for dimension form, surface characteristics and position of geometrical elements are done at the same time.

·        The measurements, inspection of parts for dimension form, surface characteristics and position of geometrical elements are done at the same time.

·        Mechanical system can be divided into four basic types. The selection will be depends on the application.

All these machines use probes which may be trigger type or measuring type. This is connected to the spindle in Z direction. The main features of this system are shown in figure 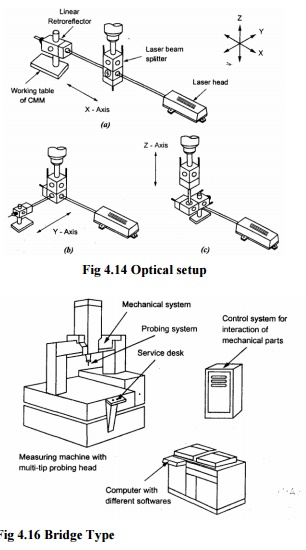 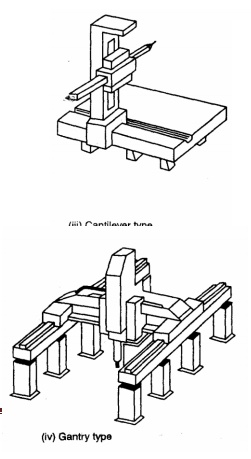 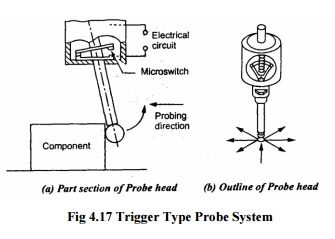 ·        The buckling mechanism is a three point hearing the contacts which are arranged at 1200 around the circumference. These contacts act as electrical micro switches.

·        When being touched in any probing direction one or f contacts is lifted off and the current is broken, thus generating a pulse, when the circuit is opened, the co-ordinate positions are read and stored.

·        After probing the spring ensures the perfect zero position of the three-point bearing. The probing force is determined by the pre stressed force of the spring with this probe system data acquisition is always dynamic and therefore the measuring time is shorter than in static principle.

•        It is a very small co-ordinate measuring machine in which the buckling mechanism consists of parallel guide ways when probing the spring parallelogram are deflected from their initial position.

•        Since the entire system is free from, torsion, friction, the displacement can be measured easily. 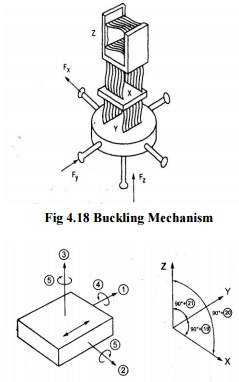 •        The  mathematical  model  of  the  mechanical system is shown in figure. If the components of the CMM are assumed as rigid bodies, the deviations of a carriage can be described by three displacement deviations.

•        Parallel to the axes 1, 2 and 3 and by three rotational deviations about the axes 4, 5 and 6.Similarly deviations 7-12 occur for carriage and 13-18 occur for Z carriage and the three squareness deviations 19, 20 and 21 are to be measured and to be treated in the mathematical model.

•        Moving the probe stylus in the Y direction the co-ordinate system L is not a straight line but a curved one due to errors in the guide.

•        If moving on measure line L further corrections are required in X, Y and Z coordinates due to the offsets X and Z from curve L resulting from the pitch angle 5, the roll angle 4 and the yaw angle 6.

•        Similarly the deviations of all three carriages and the squareness errors can be taken into account.

•        The effect of error correction can be tested by means of calibrated step gauges.

The following test items are carried out for CMM.