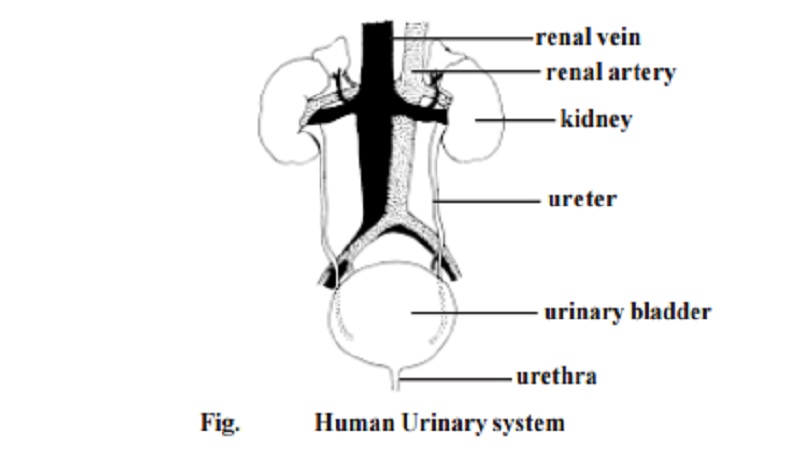 It is customary to link the organs of urinary excretion and reproduc-tion as urino-genital system. The suitability of this concept is questionable. 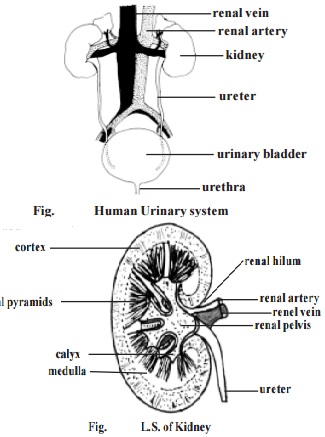 The kidneys are bean shaped organs. In fresh state the kidneys are reddish brown in colour. They lie on the posterior abdominal wall. In the abdomen, the right kidney is slightly lower than the left. It is because of the presence of liver superior to it. The kidneys are surrounded by adipose tissue. Each kidney is about 11 cm in length, 6cm in breadth and 3cm in antero-posterior dimensions. In adult males the average weight of kidney is about 150g (in adult female 135g).

The inner margin of each kidney has a small depression called the hilum. The renal artery and nerves enter and the renal vein and the ureter exit at this region. The hilum opens into a cavity called the renal sinus.

Most nephrons measure 50-55 mm in length. 15% of the nephrons are larger and they remain near the medulla. These are called thejuxtamedullary nephrons. They have larger loops of Henle.

The renal corpuscle of the nephron consists of a Bowman's capsule and a bunch of capillaries called the glomerulus.

In the Bowman's capsule the outer and inner layers are called pari-etal and visceral layers respectively. The outer parietal layer is composed ofsimple squamous epithelium. The inner visceral layer surrounds the glomeru-lus. It consists of specialized cells called podocytes. The walls of the glom-erular capillaries are lined with endothelial cells. There is a basement membrane between the endothelial cells of the glomerular capillaries and the podocytes of Bowman's capsule. The capillary endothelium, the basement membrane and the podocytes of Bowman's capsule make up the filtrationmembrane.