Profile of a typical project showing the relative sizes of the four phases of the Unified Process.

The Unified Process is not simply a process, but rather an extensible framework which should be customized for specific organizations or projects. The Rational Unified Process is, similarly, a customizable framework. As a result it is often impossible to say whether a refinement of the process was derived from UP or from RUP, and so the names tend to be used interchangeably. 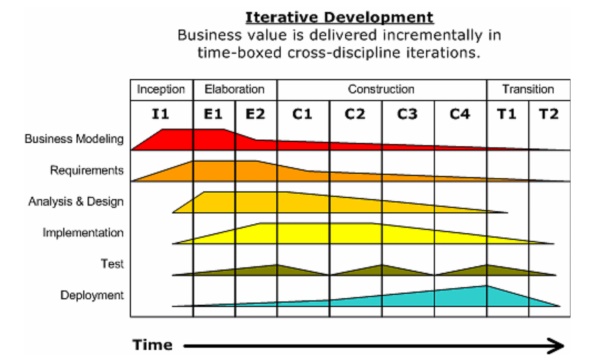        The Unified Process is an iterative and incremental development process. The Elaboration, Construction and Transition phases are divided into a series of timeboxed iterations. (The Inception phase may also be divided into iterations for a large project.)

Each iteration results in an increment, which is a release of the system that contains added or improved functionality compared with the previous release.

       Although most iterations will include work in most of the process disciplines (e.g. Requirements, Design, Implementation, Testing) the relative effort and emphasis will change over the course of the project.

       In the Unified Process, use cases are used to capture the functional requirements and to define the contents of the iterations. Each iteration takes a set of use cases or scenarios from requirements all the way through implementation, test and deployment.

       One of the most important deliverables of the process is the executable architecture baseline which is created during the Elaboration phase. This partial implementation of the system serves and validate the architecture and act as a foundation for remaining development.

       The Unified Process requires the project team to focus on addressing the most critical risks early in the project life cycle. The deliverables of each iteration, especially in the Elaboration phase, must be selected in order to ensure that the greatest risks are addressed first.

       The Unified Process divides the project into four phases:

       Inception is the smallest phase in the project, and ideally it should be quite short. If the Inception Phase is long then it may be an indication of excessive up-front specification, which is contrary to the spirit of the Unified Process.

       The following are typical goals for the Inception phase.

      Establish a justification or business case for the project

       The Lifecycle Objective Milestone marks the end of the Inception phase.

       During the Elaboration phase the project team is expected to capture a healthy majority of the system requirements. However, the primary goals of Elaboration are to address known risk factors and to establish and validate the system architecture. Common processes undertaken in this phase include the creation of use case diagrams, conceptual diagrams (class diagrams with only basic notation) and package diagrams (architectural diagrams).

       The Lifecycle Architecture Milestone marks the end of the Elaboration phase.

       Construction is the largest phase in the project. In this phase the remainder of the system is built on the foundation laid in Elaboration. System features are implemented in a series of short, timeboxed iterations. Each iteration results in an executable release of the software. It is customary to write full text use cases during the construction phase and each one becomes the start of a new iteration. Common UML (Unified Modelling Language) diagrams used during this phase include Activity, Sequence, Collaboration