       Conceptual data modeling represents the initial stage in the development of the design of the persistent data and persistent data storage for the system. In many cases, the persistent data for the system are managed by a relational database management system (RDBMS). The business and system entities identified at a conceptual level from the business models and system requirements will be evolved through the use-case analysis, use-case design, and database design activities into detailed physical table designs that will be implemented in the RDBMS. Note that the Conceptual Data Model discussed in this concept document is not a separate artifact. Instead it consists of a composite view of information contained in existing Business Modeling, Requirements, and Analysis and Design Disciplines artifacts that is relevant to the development of the Data Model.

       This stage involves the identification of the high level key business and system entities and their relationships that define the scope of the problem to be addressed by the system. These key business and system entities are defined using the modeling elements of the UML profile for business modeling included in the Business Analysis Model and the Analysis Class model elements of the Analysis Model

       The figure below shows the set of Conceptual Data Model elements that reside in the Business Models, Requirements Models, and the Analysis Model. 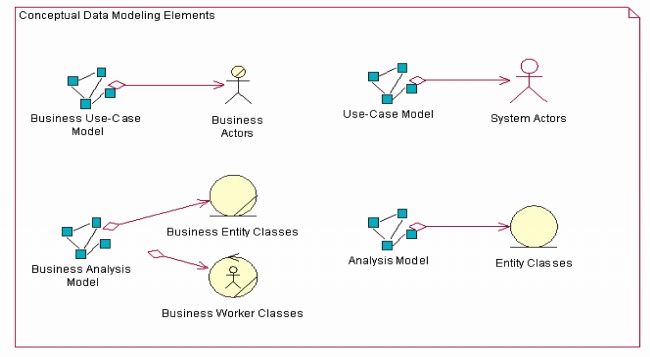 The following sections describe the elements of the Business Models, Use-Case Model, and Analysis Model that can be used to define the initial Conceptual Data Model for persistent data in the system.

       The figure below shows an example sequence diagram that depicts Business Workers and Business Entities from one scenario of the Business Use Case titled "Provide Online Auction" for managing an auction. 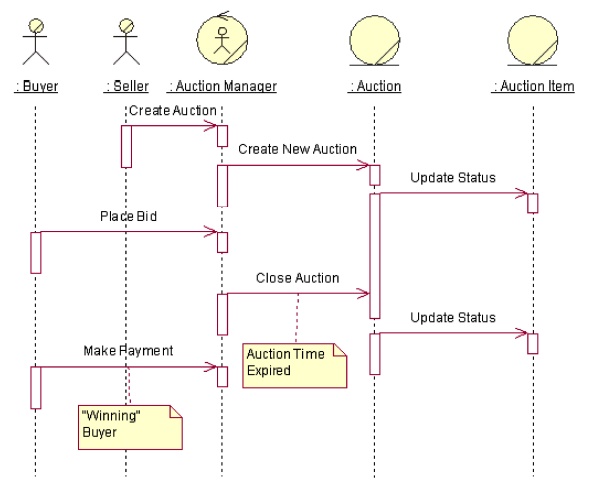        The figure below depicts the Business Use-Case Model for the online auction system. In this model, the Buyer and Seller Business Actors are now derived from a generic User Business Actor. A new System Actor named Credit Service Bureau has been added to reflect the need to process payments through an external entity. This new System Actor is another candidate entity for the Conceptual Data Model. 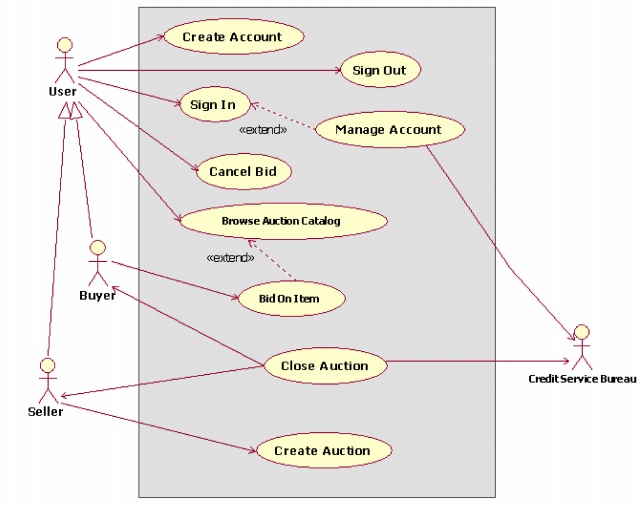 Classes and their relationships form the basis of the initial Data Model for the application.

       The conceptual Entity Analysis Classes in the Analysis Model might be refined and detailed into logical Persistent Design Classes in the Design Model. These design classes represent candidate tables in the Data Model. The attributes of the classes are candidate columns for the tables and also represent candidate keys for them. See Guidelines: Forward-Engineering Relational Databases for a description of how elements in the Design Model can be mapped to Data Model elements. 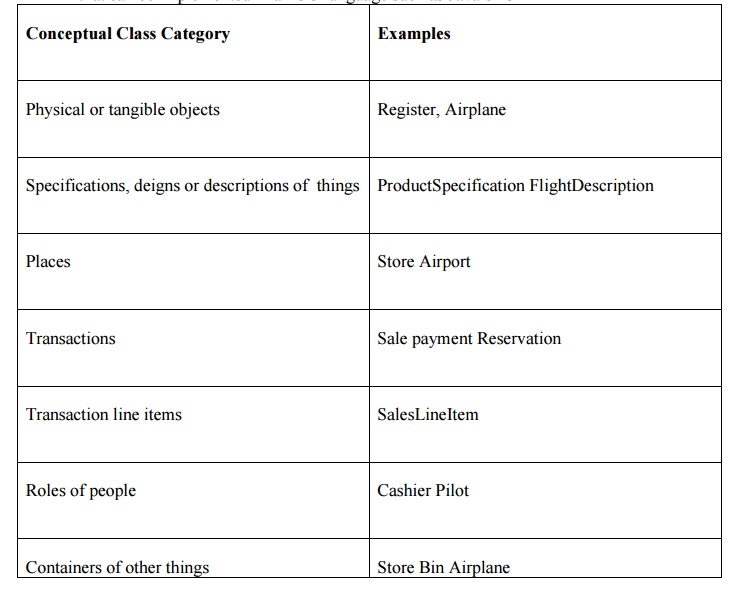        The boundary classes represent the interaction between the system and its actors. A GUI form is an example of a boundary class.

       Data store classes encapsulate the design decisions about data storage and retrieval strategies. This provides us flexibility to move a n application from database platform to another.

       The control classes represent the control logic of the system. They implement the flow of events as given in a use case.

       Entity classes are the abstractions of the keys concepts of the system being modelled. If the steps of the Architectural Analysis have been carried out, many of the entity classes may have already been identified during those steps.

       The Core functionality and logic of the system are encapsulated in the various entity classes. For example, if interest is to be calculated and paid to savings account holders, a savings Account entity class may be responsible for computing and returning the interest.

       You can normally look for the following types of things as potential entity classes:

1.       Roles played by people or organizations about which information is required to be maintained by the system. For Example, Student in a Library Management System, Vendor in a Purchase Ordering System.

2.       Other physical, tangible things. For example, Book in a Library Management System.

3.       Events that requires remembrance. For example, Reservation and Issue in a Library Management System.

       Entity class objects are usually persistent, having attributes and relationships that need to be retained for a long time, sometimes even before the life of system. An entity class is usually not specific to one use cause realization. Objects of most entity classes would required in multiple use cases. Sometimes, an entity object may not be specific to the system itself.

       Boundary classes represent the interaction between the system and its actors. They insulate the system from changes in the surroundings of the system, such as user interfaces, and interfaces to other systems.

       There may be various types of boundary classes in a system:

1.       User Interfaces classes: Classes for encapsulating the human user interface of the system, such as GUI forms.

2.       System Interface Classes: Classes that encapsulate the interaction of the system with other systems.

       Actors interact with the system only through the boundary classes

       A user interface class represents the interaction between a use case and its initiating actor. This class has the responsibility of coordinating the interaction with the actor. A boundary class may have various subsidiary classes to which some of its responsibilities are delegated. For example, in a GUI application, there may be multiple forms within a use case.

       During use case analysis, you should use the boundary classes as just place-holders for the GUI forms. Detailed GUI design is an activity of Class Design. During Analysis, the emphasis should be only on isolating all environment-dependent behaviour as boundary classes. These classes will get refined or replaced in the later stages.

       Device interface classes are responsible for interacting with the external devices that the system may depend upon for receiving inputs or handling outputs. Examples of such external devices would be: bar code reader, system clock, printer, etc.

       A device may already have a well-defined interface, which could be used by you later during design. Therefore, a note of such interface should be made in the model documentation.

       Encapsulating the database design designs in data store classes, makes the entity classes independent of the database structure, and thus provides us greater flexibility to move an application from one database platform to another.

       Controller classes provide co-ordinating behaviour in the system. A typical example would be a controller class implementing the logic and flow of events of a use case.

       Controller Classes isolates the entity classes and boundary classes from each other, making the system independent of the changes to the system boundary. They also isolate the use case specific behaviour from the entity class objects, thus making them re-usable across use cases and even across systems.

1.       They define the order of events and transactions within a use case. In other words, they encapsulate the use case-specific behaviour of the system.

2.       They are relatively independent of the changes to the internal structure or behaviour of the entity classes.

3.       They are nearly independent of changes to the boundary classes.