The Use Case Model

The Use Case Model describes the proposed functionality of the new system. A Use Case represents a discrete unit of interaction between a user (human or machine) and the system.

The Use Case Model

       Use Cases are typically related to 'actors'. An actor is a human or machine entity that interacts with the system to perform meaningful work 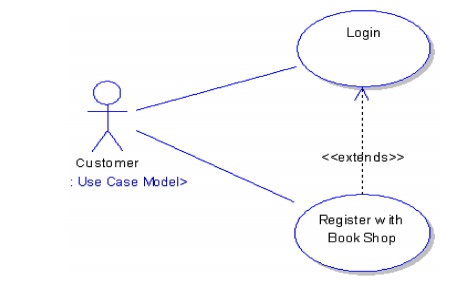 A Use Case description will generally include:

1.       General comments and notes describing the use case.

       An Actor is a user of the system. This includes both human users and other computer systems. An Actor uses a Use Case to perform some piece of work which is of value to the business. The set of Use Cases an actor has access to defines their overall role in the system and the scope of their action.

The formal specification of a Use Case includes:

1.       Requirements. These are the formal functional requirements that a Use Case must provide to the end user. They correspond to the functional specifications found in structured methodologies. A requirement is a contract that the Use Case will perform some action or provide some value to the system.

3.       Scenarios. Scenarios are formal descriptions of the flow of events that occurs during a Use Case instance. These are usually described in text and correspond to a textual representation of the Sequence Diagram.

Includes and Extends relationships between Use Cases

       One Use Case may include the functionality of another as part of its normal processing. Generally, it is assumed that the included Use Case will be called every time the basic path is run. An example may be to list a set of customer orders to choose from before modifying a selected order - in this case the <list orders> Use Case may be included every time the <modify order> Use Case is run.

       A Use Case may be included by one or more Use Cases, so it helps to reduce duplication of functionality by factoring out common behaviour into Use Cases that are re-used many times.

       One Use Case may extend the behaviour of another - typically when exceptional circumstances are encountered. For example, if before modifying a particular type of customer order, a user must get approval from some higher authority, then the <get approval> Use Case may optionally extend the regular <modify order> Use Case.

       UML provides a graphical means of depicting object interactions over time in Sequence Diagrams. These typically show a user or actor, and the objects and components they interact with in the execution of a use case. One sequence diagram typically represents a single Use Case 'scenario' or flow of events.

       Sequence diagrams are an excellent way to document usage scenarios and to both capture required objects early in analysis and to verify object usage later in design. Sequence diagrams show the flow of messages from one object to another, and as such correspond to the methods and events supported by a class/object.

       The diagram illustrated below shows an example of a sequence diagram, with the user or actor on the left initiating a flow of events and messages that correspond to the Use Case scenario. The messages that pass between objects will become class operations in the final model. 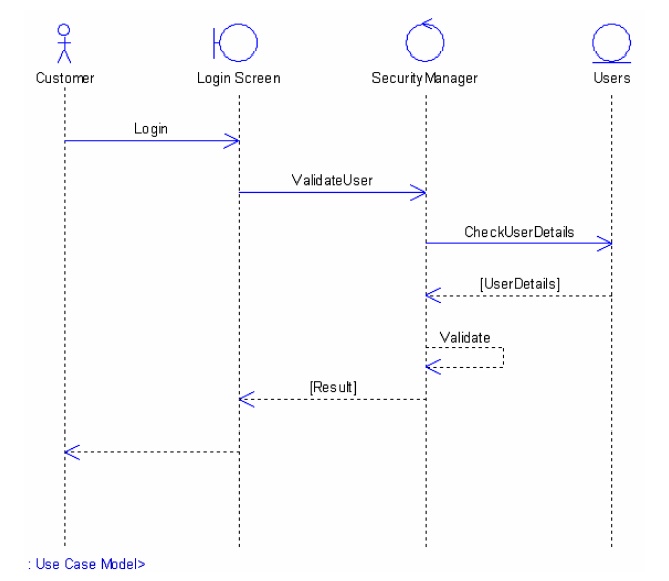        A Use Case is a formal description of functionality the system will have when constructed. An implementation diagram is typically associated with a Use Case to document what design elements (eg. components and classes) will implement the Use Case functionality in the new system. This provides a high level of traceability for the system designer, the customer and the team that will actually build the system. The list of Use Cases that a component or class is linked to documents the minimum functionality that must be implemented by the component

Relationships Between Use Cases

Use cases could be organized using following relationships:

1. Generalization Between Use Cases

       Generalization is rendered as a solid directed line with a large open arrowhead (same as generalization between classes). 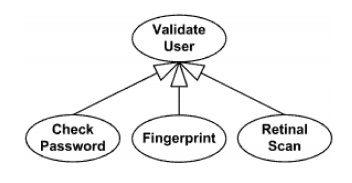 Generalization between use cases

2. Association Between Use Cases

       Use cases can only be involved in binary Associations. Two use cases specifying the same subject cannot be associated since each of them individually describes a complete usage of the system.

       The extension takes place at one or more extension points defined in the extended use case.

       Extend relationship between use cases is shown by a dashed arrow with an open arrowhead from the extending use case to the extended (base) use case. The arrow is labeled with the keyword «extend».

       Registration use case is meaningful on its own, and it could be extended with optional

Get Help On Registration use case

       An extension point is a feature of a use case which identifies (references) a point in the behavior of the use case where that behavior can be extended by some other (extending) use case, as specified by an extend relationship.

       The optional description is given usually as informal text, but can also be given in other forms, such as the name of a state in a state machine, an activity in an activity diagram, a precondition, or a postcondition. 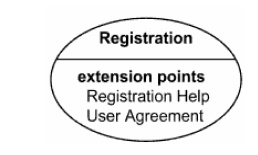        Extension points may be shown in a compartment of the use case rectangle with ellipse icon under the heading extension points. 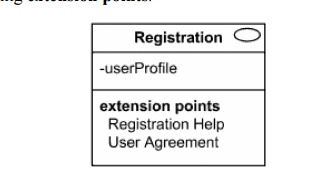        The include relationship is intended to be used when there are common parts of the behavior of two or more use cases. This common part is extracted into a separate use case to be included by all the base use cases having this part in common.

       As the primary use of the include relationship is to reuse common parts, including use cases are usually not complete by themselves but dependent on the included use cases.

       Include relationship between use cases is shown by a dashed arrow with an open arrowhead from the including (base) use case to the included (common part) use case. The arrow is labeled with the keyword «include».

       The Unified Process consists of cycles that may repeat over the long-term life of a system. A cycle consists of four phases: Inception, Elaboration, Construction and Transition. Each cycle is concluded with a release, there are also releases within a cycle. Let's briefly review the four phases in a cycle:

Elaboration Phase - During the elaboration phase the majority of the Use Cases are specified in detail and the system architecture is designed. This phase focuses on the "Do-Ability" of the project. We identify significant risks and prepare a schedule, staff and cost profile for the entire project.

Transition Phase - In the transition phase the goal is to ensure that the requirements have been met to the satisfaction of the stakeholders. This phase is often initiated with a beta release of the application. Other activities include site preparation, manual completion, and defect identification and correction. The transition phase ends with a postmortem devoted to learning and recording lessons for future cycles.