      Deployment diagrams are used to visualize the topology of  the physical components of a system where the software components are deployed. So deployment  diagrams  are  used  to  describe  the  static  deployment  view  of  a  system.

Deployment diagrams consist of nodes and their relationships.

       The purpose of deployment diagrams can be described as:

3. How to draw Component Diagram?

       So before drawing a deployment diagram the following artifacts should be identified:

       The following deployment diagram is a sample to give an idea of the deployment view of order management system. Here we have shown nodes as: 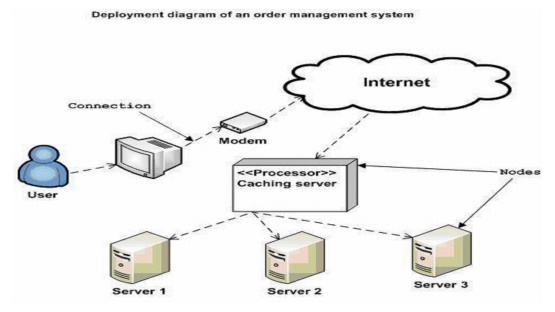 4. Where to use Deployment Diagrams?

       Only efficient software applications are not sufficient to meet business requirements. Business requirements can be described as to support increasing number of users, quick response time etc. To meet these types of requirements hardware components should be designed efficiently and in a cost effective way.

       Now a day's software applications are very complex in nature. Software applications can be stand alone, web based, distributed, mainframe based and many more. So it is very important to design the hardware components efficiently. So the usage of deployment diagrams can be described as follows:

3.       To model hardware details for a client/server system.

4.       To model hardware details of a distributed application.

       Nodes represent either hardware devices or software execution environments. They could be connected through communication paths to create network systems of arbitrary complexity. Artifacts represent concrete elements in the physical world that are the result of a development process and are deployed on nodes.

       An artifact is a classifier that represents some physical entity, piece of information that is used or is produced by a software development process, or by deployment and operation of a system. Artifact is source of a deployment to a node. A particular instance (or "copy") of an artifact is deployed to a node instance.

       Artifacts may have properties that   represent features of the  artifact,  and  operations  that  can  be  performed on  its  instances.  Artifacts  have ileName attribute - a concrete name that is used to       refer to the  artifact in a physical context - e.g. file name or URI. Some real life examples of artifacts are:

Standard stereotypes can be further specialized into implementation and platform specific stereotypes in profiles. For example, an EJB profile might define «jar» as a subclass of «executable» for executable Java archives. Specific profiles are expected to stereotype artifact to model sets of files (e.g., as characterized by a "file extension" on a file system).

Artifacts are deployed to a deployment target.  Instance specification      was  extended  in  UML to  allow instances  of  artifacts to  be  deployed artifacts in a deployment relationship. An artifact is presented using an ordinary class rectangle with the keyword «artifact». Examples in UML specification also show document icon in upper right corner.

Artifacts can be involved in associations to other artifacts, e.g.  composition  associations.  For  instance,  a  deployment  descriptor  artifact  for  a component may be contained within the artifact that manifests that component. In that way, the component and its descriptor are deployed to a node instance as one artifact instance.

Artifacts can be involved in dependency relationship with other artifacts.

Dependency between artifacts is notated in the same way as general dependency, i.e. as a general dashed line with an open arrow head directed from client artifact to supplier artifact.

A manifestation is notated in the same way as abstraction dependency, i.e. as a dashed line with an open arrow head directed from artifact to packageable element, (e.g. to component or package) and is labeled with the keyword «manifest». 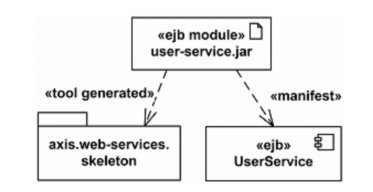        In UML 1.x, the concept of manifestation was referred to as implementation and annotated as «implement». Since this was one of the many uses of the word "implementation" this has been replaced in UML 2.x by «manifest».

       Instance specification was extended in UML 2.0 to allow instance of a node to be deployment target in a deployment relationship.

       Property was also extended in UML 2.0 with the capability of being a deployment target in a deployment relationship. This enables modeling the deployment to   hierarchical nodes that have properties functioning as internal parts. Deployment target has no specific notation by itself, see notations for subclasses.

       A   Node  is   a   deployment   target   which   represents       computational resource upon which artifacts may be deployed for execution. A Node is      shown as a perspective, 3-dimensional view of a cube.

       Hierarchical nodes (i.e., nodes within nodes) can be modeled using composition associations, or by defining an internal structure for advanced modeling applications. Nodes can be interconnected through communication paths to define network structures.

Specific network topologies can then be defined through links between node instances. Node is specialized by:

       A device is a subclass of node which represents a physical computational resource with processing capability upon which artifacts may be deployed for execution.

       A device is rendered as a node (perspective, 3-dimensional view of a cube) annotated with keyword «device 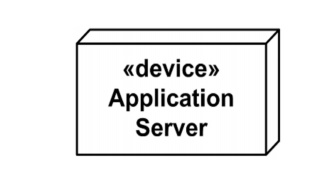 Profiles, stereotypes, and tagged values could be used to provide custom icons and properties for the devices.

       A deployment specification is a general mechanism to parameterize a deployment relationship, as is common in various hardware and software technologies. 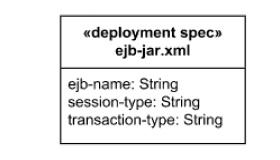        For  example,  a  „type  level‟deployment  relationship  can  be  defined  between  an “application server” Node and an “order entry request handler” executable Artifact. At the „instance level‟3 specific instances “appserver1” ... “app-server3” may be the deployment target for six “request handler*” instances. For modeling complex deployment target models consisting of nodes with a composite structure defined through „parts,‟a Property (that functions as a part) may also be the target of a deployment. Deployment diagram shows deployed artifacts contained within a deployment target symbol.