These have a stem, usually a rhizome, and roots with no secondary thickening. Leaves are often large and pinnate but may be simple or one cell thick. Sporangia are borne in sori on the underside of leaves or on reproductive leaves separate from the vegetative leaves.

Typical ferns are leptosporangiate and homosporous  and are by far the largest and most familiar group of ferns (Fig. 4). The stem is usually an underground or epiphytic rhizome and most produce leaves only at their tip. A few have a branching rhizome, like bracken and, in tree ferns, the stem is a trunk. This trunk has no secondary thickening and often is of a similar width throughout its length, although they frequently have dead roots near the base of the trunk forming a ‘skirt’. Many fern leaves are large and pinnate but others are simple, as in the British hartstongue and the tropical birdsnest fern (both Asplenium) and some tropical climbing ferns have branched leaves of indeterminate growth. In the filmy ferns, Hymenophyllum, the leaf is one cell thick, as in mosses. Simple leaves are regarded as derived from pinnate leaves. Fern leaves unfurl from a tight spiral giving the characteristic ‘fiddle’ heads (Fig. 4). 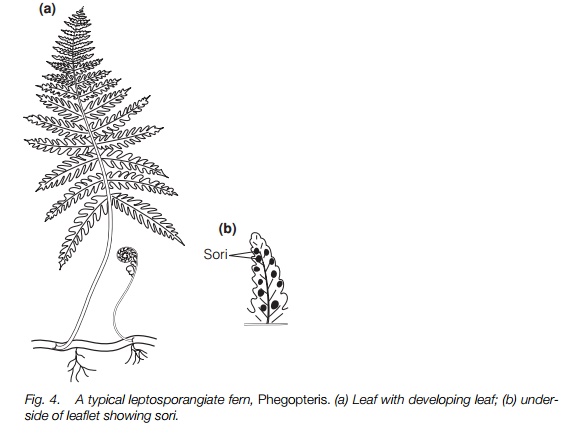 In many ferns, all leaves are similar and these may bear sporangia, usually on the underside in groups known as sori (singular sorus) (Fig. 4) that, in some species, are covered by a protective flap from the leaf, the indusium. Some ferns have separate fertile leaves of a different shape, usually with narrower segments and sometimes with the lamina much reduced.