There are three small groups of eusporangiate ferns: the adderstongues and moonworts, the tropical Marattiaceae and the whisk-fern, Psilotum, and its relatives. The adderstongue group consists of small, rather insignificant, plants that do not resemble normal ferns but have one vegetative and one fertile leaf (occasionally more), possibly the remains of a dichotomously branching stem (Fig. 2). The large eusporangia are borne in lines on the fertile leaf, each dehiscing with a slit at the tip to produce 2000 or more spores. They are regarded as a remnant of an ancient group of ferns and one of their most peculiar features is the large number of chromosomes, presumably derived from high polyploidy. One species of adderstongue, Ophioglossum reticulatum, has approximately 1260 chromosomes, the largest number known for any living organism. The Marattiaceae closely resemble typical ferns in their large pinnate leaves with sporangia on the lower surface. The sporangia are typical eusporangia, large with numerous spores and dehiscing by a slit at the tip. 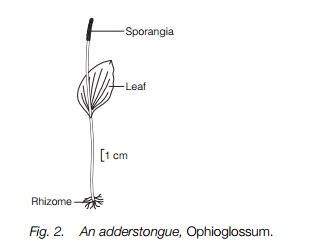 The whisk-fern group consists of two genera, Psilotum (Fig. 3) and Tmesipteris, of such simple vegetative construction that they resemble fossils of some of the first vascular land plants , and were long thought to be related to them, though with no intermediate fossil record. They are regarded as ferns owing to their resemblance to some southern hemisphere ferns. They have branched stems, dichotomous in Psilotum and with flattened side branches in Tmesipteris, a branched rhizome but no leaves or roots. The sporangia are large and, in Psilotum, three are fused together at each point, associated with a small scale. 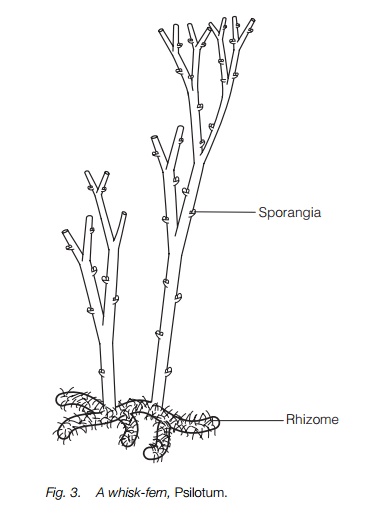