General characteristics: Ferns are a large group of plants occurring throughout the world. Most have rhizomes with roots and some have a trunk. Leaves are typically large and pinnate derived from a branch system. A few ferns have a eusporangium similar to those of other spore-bearing plants, but most have a leptosporangium with explosive dehiscence, dispersing the spores. They are homosporous except for one small group.

The ferns are a numerous and important group of vascular plants, with about 12 000 species growing throughout the world. They range from small epiphytes to tree ferns 20 m high to floating aquatics. Many ferns have a perennial rhizome, either underground or growing along a branch if epiphytic, with roots attached. Characteristically, ferns have large pinnate leaves, i.e. with numerous leaflets, but some have simple leaves and there is a great range in size. The leaves are regarded as flattened and fused branch systems that have become determinate in their growth, i.e. without stem buds, so they cannot continue growing (a few climbing ferns have stem buds in their leaves and these are indeterminate in their growth). This type of leaf has a fundamentally different origin from the microphylls of clubmosses and horsetails and they are known as megaphylls . The conducting system is typical of vascular plants , with the xylem cells being only tracheids except in bracken and some of the water ferns in which there are vessels, perhaps independently evolved from those of flowering plants but almost identical in structure.

The ferns are divided into two main groups based on their sporangia. One group has sporangia similar to those of the clubmosses and horsetails , known as eusporangia. In these, several initial cells form the sporangium and this develops a wall several cells thick. One or more of the cell layers disintegrates to form nutritive tissue for the developing spores. There is a line of weaker cells in the wall which splits to allow spores to be dispersed in the wind.

The second type, the leptosporangium, is peculiar to the ferns (Fig. 1). It arises from a single initial cell and the mature sporangium always has a wall one cell thick, all other cells disintegrating as the spores mature. The number of spores is always less than in a typical eusporangium, normally 64 or fewer. There is an incomplete ring of cells in the sporangial wall which has a thin cell wall on the outside and thickened inner walls. On drying out at maturity, the thin sections of the cell wall are sucked in and the thickened walls drawn towards each other. This leads to a split in the part of the sporangial wall not covered by the ring of cells and the ring becoming inverted. Considerable tension builds up which eventually leads to a loss of cohesion in the water molecules in the cell; the water then becomes gaseous leading to a sudden release of tension and an explosive return of the sporangium to its original position. Spores are ejected in 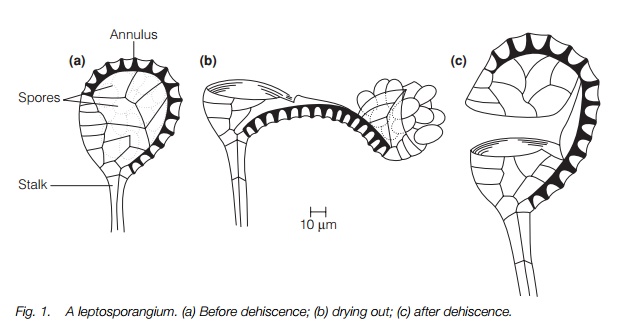 the process. The ring of thick-walled cells is at one end of the sporangial wall in some ferns, in others obliquely or transversely positioned. A few ferns, such as the royal ferns, are intermediate between eusporangiate and leptosporangiate types.