There are several types of chromatography which are classified based on the interaction of the sample with the mobile and stationary phase. In 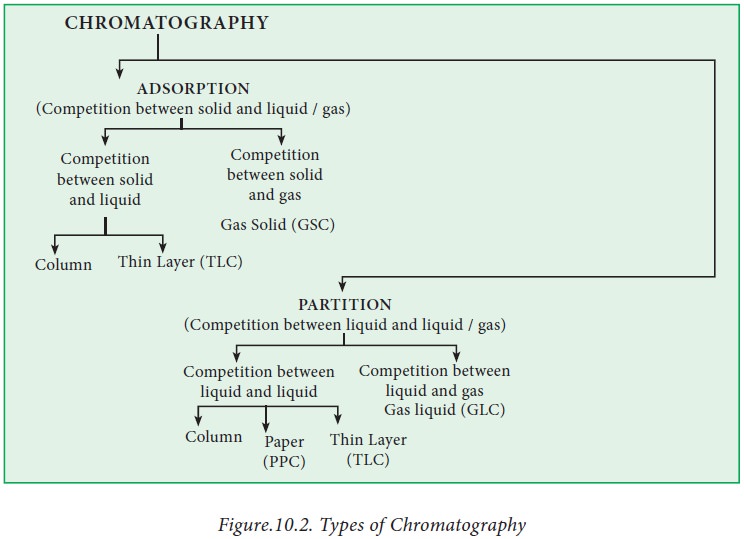 In column chromatography, a mixture of substances, in solution is applied to a column filled with a permeable solid matrix immersed in a solvent. As shown in Fig.10.3, sample, for example, a mixture of protein is applied to the column matrix (packed into a glass or metal surface). After equilibration, the proteins are eluted out using a specific mobile phase. Since different proteins are retarded to different extents by the interaction with the matrix, they can be collected separately. According to the choice of the matrix, proteins can be separated based on the charge, hydrophobicity, size or ability to bind to a characteristic group. 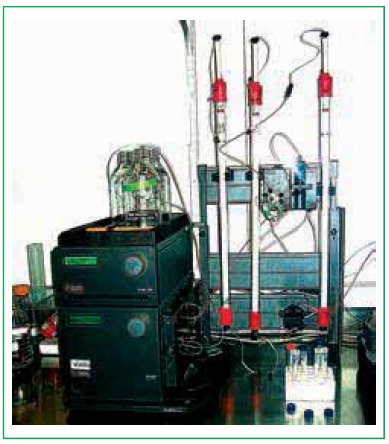 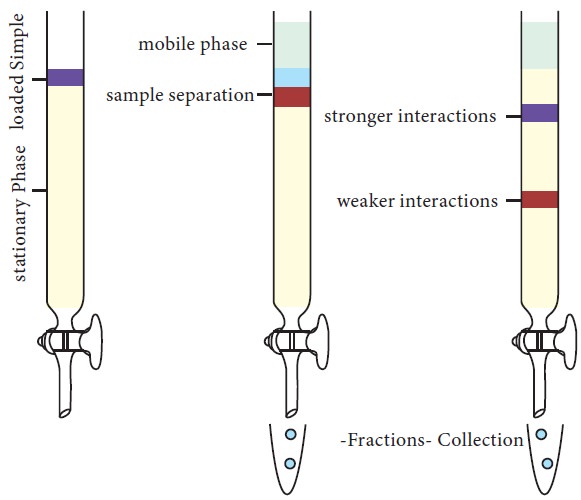 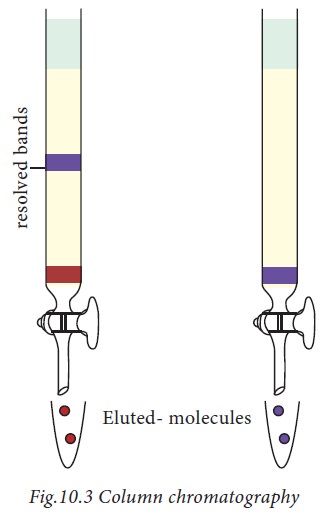 Paper chromatography was discovered by the Russian investigators Izmailov and Schraiber. The filter paper strips, made up of cellulose are used to support the stationary phase (water) while the mobile organic phase moves on the suspended paper strip in a chamber. In this technique, the solution containing the mixture of compounds is spotted at a point above 3cm from the end of a Whatmann filter paper (Fig.10.4). After spotting the sample, the paper is dried and equilibrated into a glass jar which contains the desired solvent, for example butanol: acetic acid: water in the ratio of 4:1:5, which acts as a mobile phase. It should be ensured that the point of application remains well above the level of the solvent in the jar. The paper is suspended in such a manner so that it hangs freely without touching the sides of the container. The solvent ascends on the paper and is called as ascending chromatography. The factor governing the separation of compounds in the sample depends on the partition between two immiscible phases. 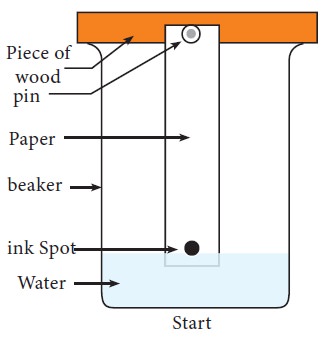 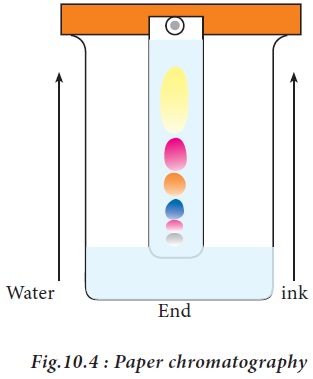 When the solvent reaches the top of the paper, the paper is removed and the distance to which the solvent travelled is marked. In order to locate the compounds, the paper strip is dried and sprayed with a specific developer. For example, to identify amino acids the strip is sprayed with 0.5% ninhydrin dissolved in acetone to visualize the colored spots indicating a particular amino acid. The ratio of the distance travelled by a component (i.e. amino acid) to that travelled by the solvent front, both measured from the marked point of application of the mixture, is called the resolution front or retardation factor (Rf) value for that component. Thus,

Principle: Thin layer chromatography (TLC) is adsorption chromatography performed on adsorbent materials supported on glassplates. This technique combines the advantages of paper chromatography with those of column chromatography. In TLC, the stationery phase (alumina powder or silica gel with calcium sulphate as binder) is coated on a glass, plastic or foil plates. The thin layer is air dried at room temperature and activated in a hot air oven at 100 - 250°C. The mixture to be separated is spotted on the plate at one end and kept vertical in a container with mobile phase. After a few minutes, the components are separated through the thin layer and dried. The spots are detected by spraying the plates with specific staining reagents.

TLC is superior to paper Chromatography for the following reasons:

·     Concentrated sulfuric acid spray followed by heating may be used to develop the chromatogram by charring, which makes the spots of organic compounds visible.

·     The time taken to separate a mixture of amino acids by paper chromatography can be reduced by TLC.

·     The choice of adsorbents to allow separation of components is restricted in paper chromatography. In TLC, a wide range of adsorbents can be used.

Principle : Ion exchange chromatography was developed by D’Alelio in 1942 using synthetic ion exchange medium based on polystyrene resin. Ion exchange chromatography is a displacement technique in which the ions in either the sample or the buffer displace the existing mobile ions associated with the fixed resin ions. Ion-exchange resins are insoluble, porous matrix containing numbers of ionic groups capable of binding ions of an opposite charge from the surrounding solution. As described in Fig.10.5, proteins move through the column depending upon the net charge at the pH being used. 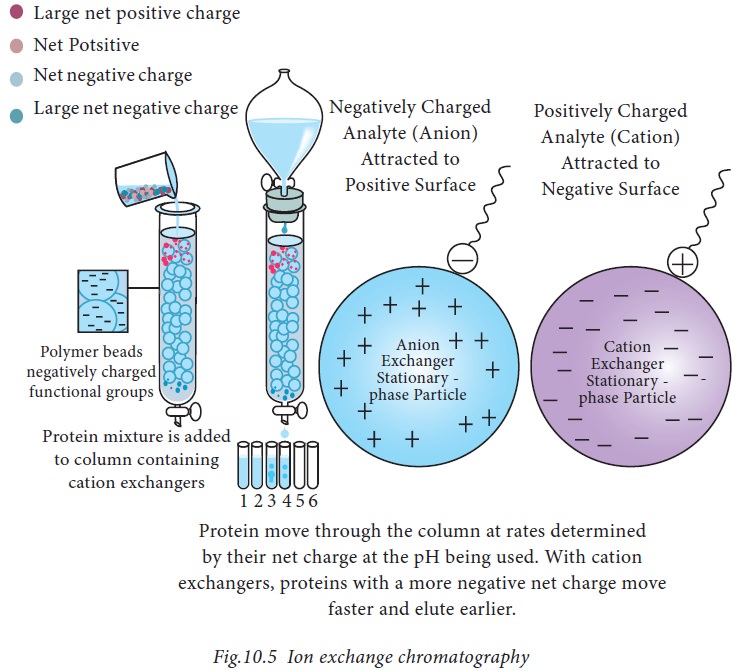 When the proteins are attached to the column material, increasing salt concentration or buffers with different pH are passed through the column. Proteins will be washed of the column at different times depending on their molecular structure, net charge and side group. Anion exchangers contain immobilized cationic groups that bind to anions and vice-versa. Examples of anion exchangers are Diethylaminoethyl (DEAE), aminoethyl (AE). Cationic exchangers include carboxymethyl (CM) cellulose, sulphopropyl (SP).

Principle : Gel permeation or molecular size exclusion chromatography is based on the separation of molecules depending on the molecular size and shape. It employs column which contains pores of varying diameter. When the sample is added to the column, molecules of larger size travel faster than the smaller molecules due to permeation into the gel pores. Therefore, larger molecules are eluted first from the column, followed by molecules of smaller size (Fig. 10.6). The gel materials used in gel permeation chromatography are shown in Figure.10.6. 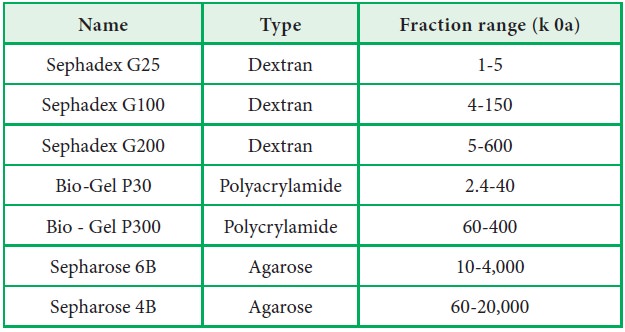 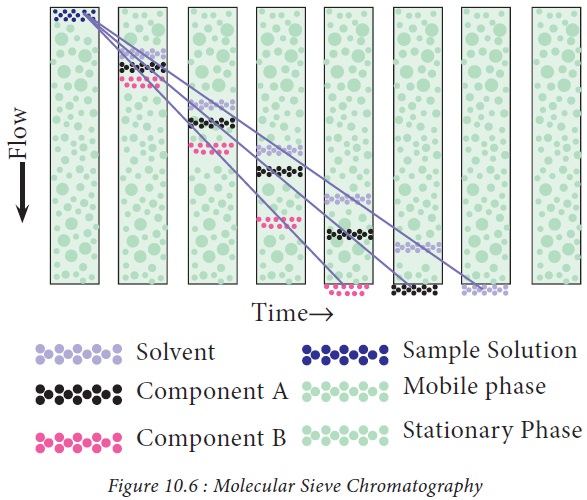 Affinity chromatography is an efficient technique, where separation of a biomolecule can be achieved through highly specific interactions. The interaction is based on the chemical nature of the molecule present in the sample. 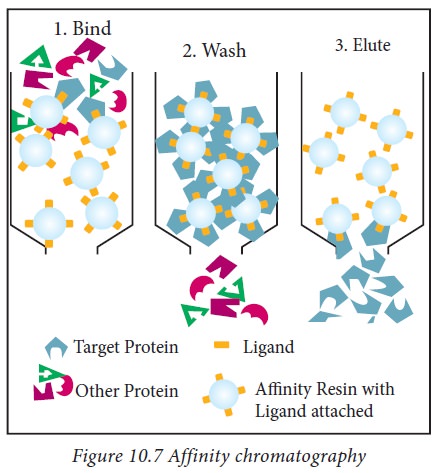 HPLC (High Performance Liquid Chromatography) is a highly improved form of liquid column chromatography used to separate the components of a mixture. Columns used in the HPLC system are generally made in stainless steel to withstand the high pressures. Sample administration is through an automated injection system. Mobile phase (mixture of polar or non-polar liquid components) are contained in a glass reservoir. Eluents used for HPLC must be purified. Pumping systems for delivery of the eluent are one of the most important features of HPLC systems. A detector is used to retrieve the data and its analysis in the form of chromatogram (Fig.10.8). Applications of HPLC include isolation and purification of biologically active compounds, purification of chemical compounds, and developing processes for synthesizing chemical compounds.