The use of spectroscopic methods to evaluate bio-molecules continues to be an important area in Biochemistry.

The use of spectroscopic methods to evaluate bio-molecules continues to be an important area in Biochemistry. Spectroscopy is the study of the absorption and emission of radiation by matter. Using spectroscopic methods, it is possible to analyze the colour developed by the bio-molecule exhibited by the substances that absorb radiation from the visible region of the spectrum. Measurements of the intensity and wavelength of the radiation that is either absorbed or emitted provide the basis for sensitive method of detection and quantification. The study of functions of the body in both health and diseased states require the analysis of blood, serum and body fluids. The applications of spectrometry has produced more diagnostic kits to quantify the constituents present in blood, tissue, urine and other biological material.

We might have noticed that the colours of two solutions of the same substance, one a deep and another lighter colour. When the colour of the solution deepens, it is an indication that it is more concentrated. This forms the basis of spectrophotometry, where the intensity of the colour is a direct measure of the amount of the material present in the solution. Light is a form of electromagnetic radiation. When it falls on a solution one can expect three changes. a). the light can be reflected by the substance b). the light can be absorbed by the substance c). only certain wavelengths can be absorbed and the remaining transmitted. The absorbance of transmitted light is of prime importance in spectrophotometry. The observed colour is due to the absorption of a certain wavelength of light in the visible spectrum and transmittance of the other wavelength.

The absorption of light by a solution is shown in Fig.10.15. When a beam of monochromatic light (Io) is allowed to pass through a homogenous light absorbing medium, the intensity of light coming out (I) decreases exponentially, with increase in the concentration and pathlength of the medium through which it is passed. The fraction of such incident light absorbed by a given solution at a particular wave length is related to the thickness of the absorbing layer i.e., the path length and concentration of the absorbing species. This relation may be combined using Beer-Lambert’s law to determine the concentration of analyte in a solution using spectrophotometry.

logIo/I = εcl, where Io and I are the intensities of incident and transmitted light, respectively. l, is the path length, c is the concentration of the absorbing species and ε is known as the molar extinction co-efficient. The expression logIo/I is absorbance.

Principle:A beam of light with a precise wavelength is passed through the sample through a mono-chromator and lens, which navigate the coloured light to the output device which measures the extent of colour as compared to a standard. A microprocessor then calculates the absorbance or percent transmittance. If the concentration of the solution is greater, more light will be absorbed, which can be identified by measuring the difference between the amount of light at its origin and that after passing through the solution.

Components of a Colorimeter :

A schematic representation of the working of the colorimeter is shown in Fig.10.16

The essential parts of a colorimeter are: a) light source, which is from a tungsten lamp and the light passes through a slit b) an aperture which can be adjusted accordingly c) a filter where the light from the lamp source converts polychromatic light to a monochromatic light d). photocell or tube which converts the light energy to electrical energy e) a detector measures the light which was transmitted by the sample f) cuvette – a glass tube to place the solution. 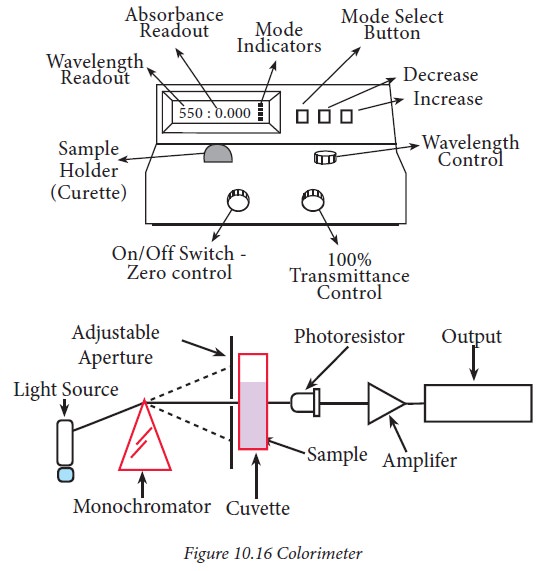 A well known application of the colorimeter is to determine the concentration of the solute in a solution. To monitor the growth of a bacterial culture, colorimeter is used. As the culture grows, the medium becomes cloudier and absorbs more light which can be quantified. Colorimeters are used for testing water quality and screening of chemicals.

General steps in carrying out a photometric analysis is explained using blood glucose estimation procedure as an example.

·     Separation of the substance from the complex mixture. For example, estimation of blood glucose requires the precipitation of lipids and proteins using de-proteinising agents which otherwise interfere with the colour reaction of glucose.

·     Qualitative conversion to a coloured or light absorbing substance. For example, after de-proteinization of the sample, the supernatant conataining glucose is made to react with orthotoluidine reagent to give a greenish blue coloured complex.

·     Measurement of light absorption of sample. For example, the colour intensities of the complex can be measured.

·     Spectrophotometry is used in diverse area in the field of biological science.

·     To identify classes of compounds in pure and biological samples.

·     For quantitative analysis of proteins, lipids and nucleic acid etc.

·     To assay the enzyme activity and their kinetics.

·     Elucidation of the structure of organic compounds.