Centrifugation is a separation technique based on the properties of the particle in an applied centrifugal field.

Rotors are important components in a centrifuge and there are several types of rotors. The schematic representation of rotors used in centrifuge is shown in Fig.10.12.

1.  Fixed angle rotor: In fixed angle rotor, particles move radially outward under the influence of a centrifugal field. The tubes are held at the angle 20 to 45 degrees. Particles have only a short distance to travel, to form a pellet at the bottom of the tube.

3.  Vertical rotor: Vertical rotor presents the shortest possible path for a particle. In this rotor, the pellet is deposited along the entire length of the tube.

4.  Zonal rotor: The zonal rotors may be of the batch or continuous flow type. They are designed to minimize the wall effect that is encountered in swinging-bucket and fixed angle rotors, and to increase sample size.

Two main centrifugation techniques are in general use

a. Preparative centrifugation: This technique is used for separation, isolation and purification of whole cells, plasma membrane, ribosomes, nucleic acids, and many subcellular organelles.

b. Analytical centrifugation: This technique is used to study the characteristic feature of a pure macromolecule. Specially designed rotors and detector systems are needed to continuously monitor the process of sedimentation of the material in the centrifugal field.

Differential centrifugation is based on the difference in the sedimentation rate of the particles of different size and density. It is used for the isolation of sub-cellular organelles. The centrifugal force is proportional to the radius of the centrifugal head and to the square of angular velocity. Therefore, it is possible to use small rotor heads at very high speeds. 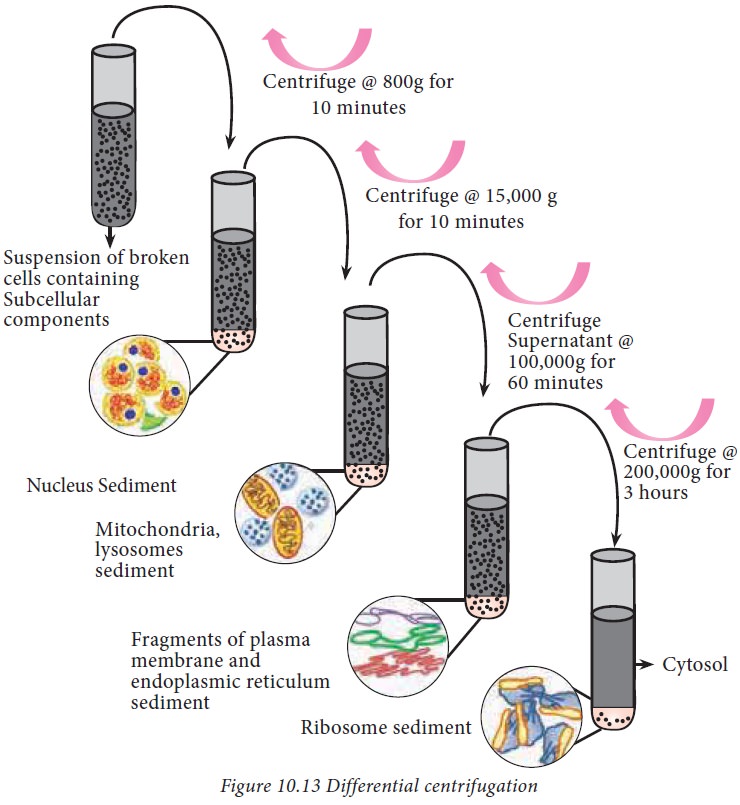 The rotor heads are run in a vacuum. The tube containing the homogenate is held at an angle to the axis. This technique is commonly used for collecting cells or producing subcellular fractions from a tissue homogenate. For example, homogenizing a rat liver at relatively low speed will pellet the larger dense nuclei and centrifugation at higher speed will sediment particles to further lower size (Fig.10.13)

This technique was developed by Scientist Brakke in the year 1960, where he proposed three ways through which density gradients may be used.

This type of centrifugation involves, layering of sample solution on the top of the gradient, where the density continuously increases towards the bottom of the tube. It is used to measure the rate of sedimentation for separation of particles with different sedimentation co-efficient. 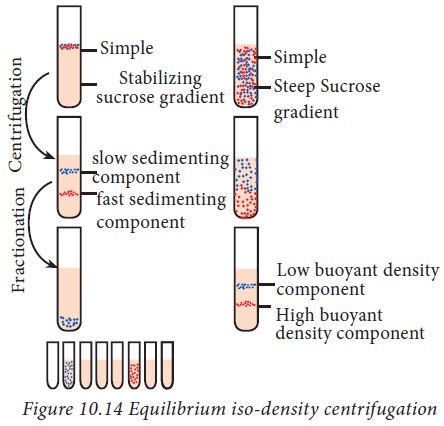 Analytical ultracentrifugation, developed by Svedberg, is a versatile method for the separation of small particles such as particles of 10 microns in size. It can operate safely at about rotor speeds upto 60,000 – 10,00,000 rpm. Protein molecules, under the influence of high centrifugal force can be made to sediment toward one end of a centrifuge tube. The rate of sedimentation for a protein under a certain centrifugal force depends on the density, shape and size of the molecule. It is used to determine the sedimentation co-efficient and molecular weight of the macromolecules in solution.