Types of Stress and Strain

A body is said to be rigid body, if the distance between any two points in a body is unaltered due to application of the force. In practice no body is perfectly rigid.

Elasticity is a branch of physics which deals with the elastic property of materials. When an external force is applied to a body, there will be some change in its length, shape and volume. When this external force is removed, and if the body regains its original shape and size, then the body is said to be a Perfectly Elastic body. If the body does not regain its original shape and size after removal of the applied force, then it is said to be Perfectly Plastic body.

A body is said to be rigid body, if the distance between any two points in a body is unaltered due to application of the force. In practice no body is perfectly rigid. When a body is subjected to some external forces the body will offer some resistance to the deforming forces, as a result some work is done on the body and this work is stored as the elastic potential energy. Now if the deforming forces re removed the energy stored brings back the body to its original condition.

Stress is define as the restoring force per unit area which brings back the body to its original value from the deformed state. As long as no permanent change is produced in the body, the restoring force is equal to the force applied. Unit of stress is N/m2.

When the force is applied along the surface of the body, then the stress applied is Normal Stress.

a. Longitudinal or tensile strain

Definition: it is defined as ratio between the changes in length to the original length without any change in its shape, after the removal of the external forces.

When a force is applied along it length of the body of the original length ‘L ‘, due to this applied force if the change in length is l then

Definition: It is defined as the angular deformation produced on the body due to the application of external tangential forces on it.

Let ABCD be a body with its CD fixed a shown in the figure. A tangential force is applied on the upper surface AB of the body. Therefore the body shears to angle ø and it goes to a position A’B’CD. Then this angle ø measured in radians is called shearing strain. 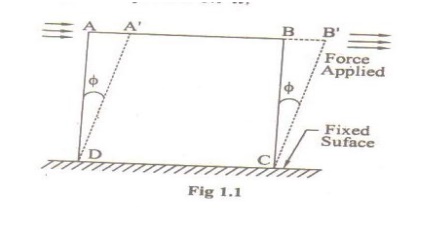 Definition: it is defined as the ration betweenthe change in volume to the original volume without any change in its shape.

Explanation: When forces are applied normal to the surface of the body of volume ‘V’, it undergoes a change in volume (V), then