Heat is one of the forms of energy. It is transmitted from one place to another by three different ways. They are Conduction, Convection, Radiation.

Heat is one of the forms of energy. It is transmitted from one place to another by three different ways.

It is well known fact that is conducted through the material of the body. In conduction, heat transfer takes place from one point to another through a material medium without the actual movement of the particles in that medium.

As an example, when a metal rod is heated at one end, the heat gradually lows along the length o the rod and the other end o the rod also becomes hot after some time. This shows that heat has travelled through the molecules of the rod from one end to other. The molecules in the rod remain fixed in their mean positions.

Each molecule thus transfers some of the heat it receives from its predecessor to its successor. Thus the transmission of heat takes place by molecular vibration in case of conduction.

It is the process of transmission of heat from one point to another through substance (or some medium) without the actual motion o the particles.

Conduction always requires some material medium. The material medium must be solid. As it requires medium, the conduction process takes place over vacuum. In fluids (liquid and gas), heat transmission is through the process of convection.

Consider a slab of material of length x meter and area of cross section A as shown in the figure.

One end of the slab is maintained at a higher temperature θ1 and the other end at a lower temperature is θ1. Heat flows from the hot end to the cold end. It is found that the amount of heat(Q) conducted from one end to another end is

Directly proportional to the area of cross-section(A)

Directly proportional to the temperature dierence between the end θ1- θ2

Directly proportional to the time of conduction(t)

Directly proportional to the length of (x). 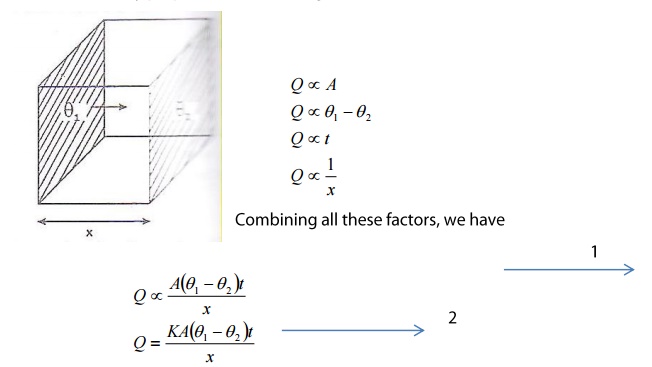 The condition define the coefficient of Thermal conductivity

It is defined as the amount of heat conducted per second normally across unit area of cross-section of the material per unit temperature difference per uint length.

The quantity (θ1- θ2) / x denote the rate of fall of temperature with respect to distance. It is know as temperature gradient.

The negative sign indicates the fall of temperature with distance.

It state that the rate at which a body loses heat is directly proportional to the temperature difference between the body and that of the surrounding.

The amount of heat radiated depends upon the area and nature of the radiating surface.

If dQ is the quantity of heat lost in a small time dt, then

Where k is the constant depending upon the area and the nature o the radiating surface. The negative sign indicates that there is decrease of heat with time.

Consider a body of mass m, specific heat capacity S and at temperature θ. Suppose the temperature falls by a small amount dθ in time dt.

Thus, the amount of heat lost 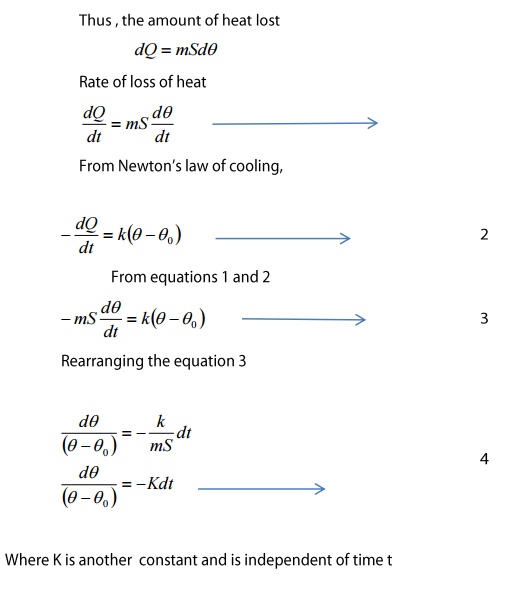 y=mx+c and it represents a Straight line.

If the cooling takes place rom θ1o C to θ2oC in time t then taking the limits, we have 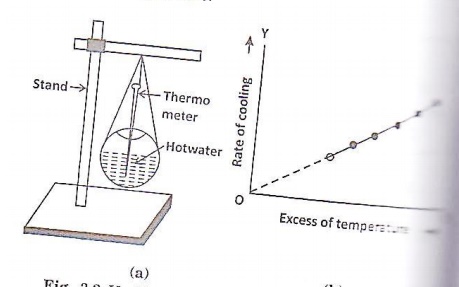 The graph is found to be a straight line, thereby, showing that the rate of cooling is proportional to the excess of temperature.

The temperature difference between the hot body and surrounding should be low.

The heat loss is only by radiation and convection.

The temperature of hot body should be Uniform throughout.

The specific heat capacity of the liquid is determined by using this law.

5 RECTILINEAR FLOW OF HEAT THROUGH A ROD

Consider a long rod AB of Uniform cross section heated at one end A as shown in the figure. Then there is low of heat along the length o the bar and heat is also radiated from its surface. B is the cold end. 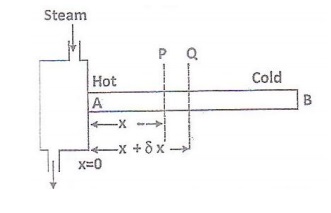 Consider the low of heat between the section P and Q at distance x and x+δx rom the hot end. Excss temperature at Section P above the surroundings=θ 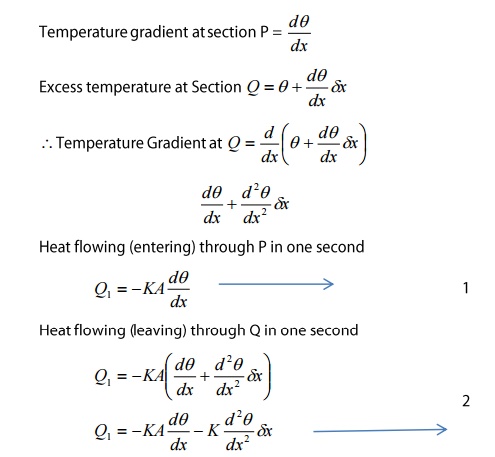 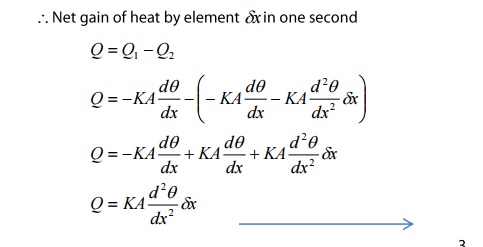 Before the steady state is reached, the amount of heat Q is used in two ways. A part of the heat is used in raising the temperature of the rod and the remaining heat is lost by radiation from the surface o the element.

Heat absorbed per second to raise the temperature of the rod 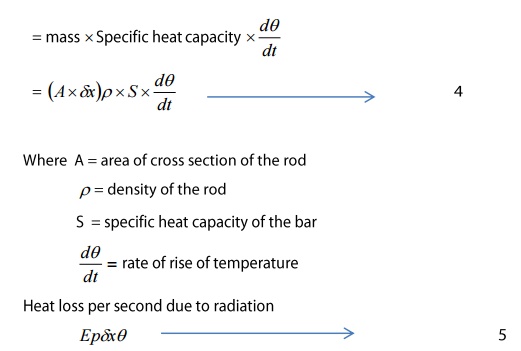 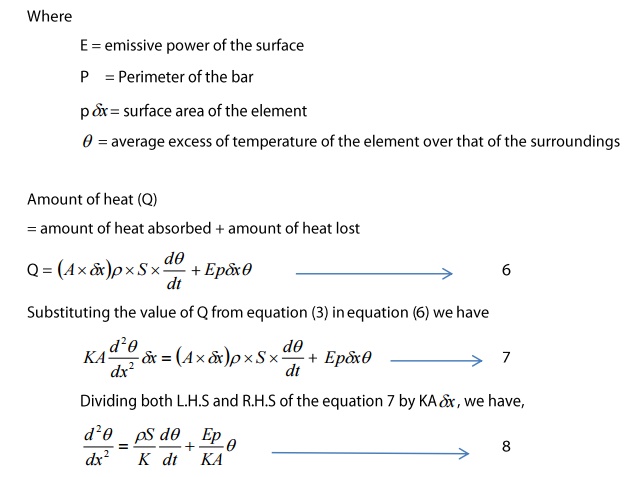 The equation 8 is the standard differential equation for the flow of heat through the rod.

The thermal conductivity of any material is determined using equation 8 by considering the actual condition of the material.

Case 1: When heat is lost by radiation is negligible

If the rod is completely covered by some insulating materials, then there is no loss of heat due to radiation. Hence, the heat lost by radiation Epδxθ is zero.

In that case, the total heat gained by the rod is completely used to raise the temperature of the rod.

Case 2: After the steady state is reached

After the steady state is reached, there is no raise of temperature. 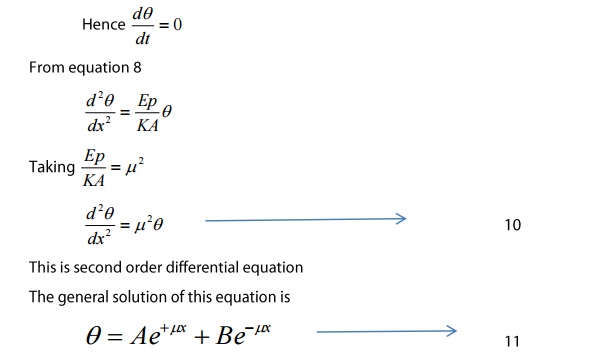 Here A and B are two unknown constants which can be determined from the boundary conditions of the problem.

Suppose the bar is of infinite length

Excess o temperature above the surroundings of the hot end = θo

Temperature of the other end (cold end) = 0 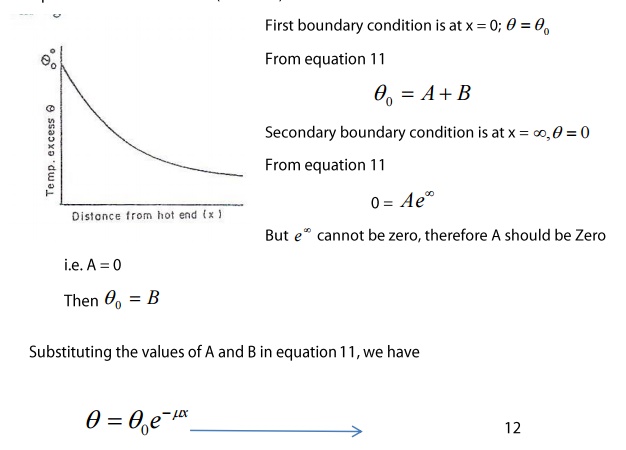 This equation 12 represents the excess of temperature of a point at distance x from the hot end after the steady state is reached and it represents an exponential curve.

The temperature falls exponentially from the hot end as shown in the figure.

Let us consider a composite slab (or compound wall) of two different materials A and B with thermal conductivities K1 and K2 and of thickness x1 and x2.

The temperature of the outer aces of A and B are θ1 and θ2. 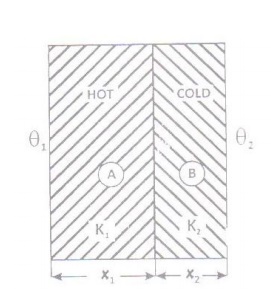 The temperature of the surface in contact is θ. When the steady state is reached, the amount of heat flowing per second(Q) through every is same.

Amount of heat flowing through the material(A) per second 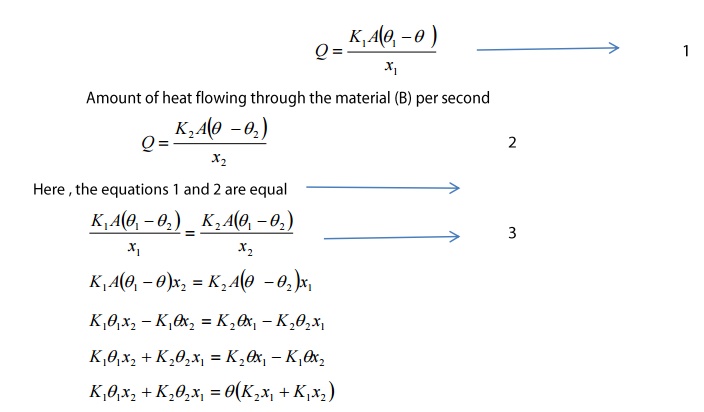 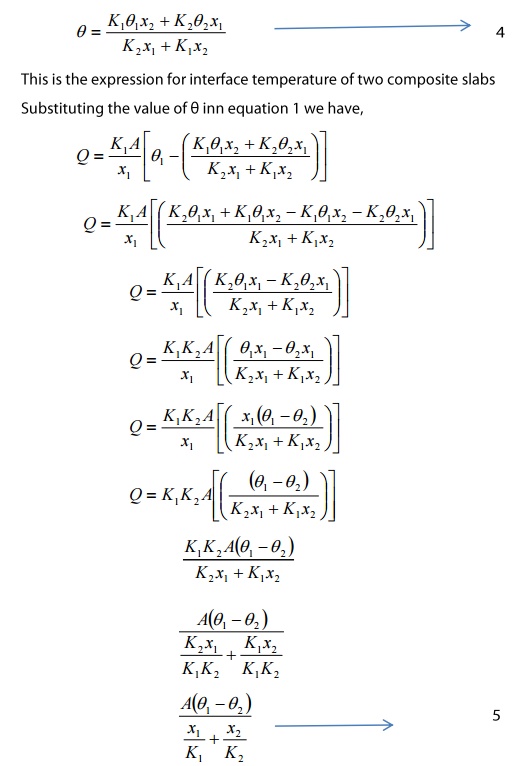 The method can be extended to composite slab with more than two slabs.

In general for any number of walls or slabs, the amount of heat conducted is

Let us consider a composite slab (or Compound wall) of two dierent materials A and B with thermal conductivities K1 and K2 and o thickness x1 and x2. They are arranged in parallel as shown in the figure. 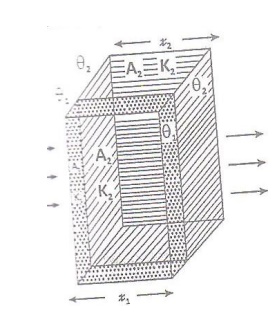 Let the faces of the material be at temperature θ1 and the respective other end aces be at θ2 temperature. 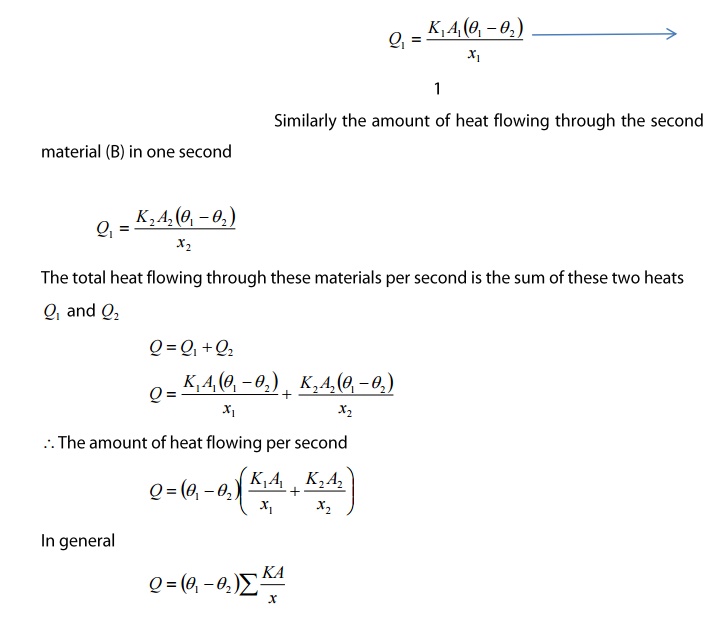 The thermal conductivity of a material is determined by different methods.

2.     Forbe’s Method – for determining the absolute conductivity of metal