It is found the stress and strain always accompany each other, without stress, strain will not be there and vice versa.

Robert Hooke, proposed a relation between stress and strain and I s named as Hooke’s law by his name.

Statement: according to this law, “Stress is directly proportional to the strain produced, within the elastic limit”

Where E is called as modulus of the elasticity.The value of E depends upon the nature of the material.

When the forces are applied to the bodies, each and every body has a tendency to oppose the force and will try to regain its original position after the removal of the force. When the applied force is increased beyond the maximum value, the body does not regain its original position completely, even after the removal of the external force. Hence the maximum stress up to which a body can recover its original shape and size, after removing the external forces is called Elastic limit.

Let us consider a wire loaded by some forces. It obeys Hooke’s law and the wire extends up to a limit called elastic limit (A) as shown in the figure. If the load is applied beyond the elastic limit, Hooke’s law is no longer obeyed and the extension increases to the point ‘B’ even for a small increase in the load. Now, even if the load is removed the wire will not regain its original position. Therefore, the point at which the body loses its elasticity is called Yield Point represented by ‘B’ 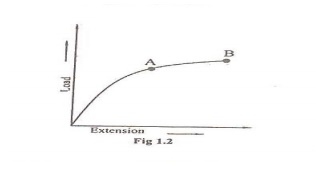 If a body continuously subjected to Stress or Strain, it gets fatigued (weak), called Elastic Fatigue.

Example: Consider two torsional pendulums A and B of same wires. Let the pendulum ‘A’ be set into oscillation continuously. After some time if ‘A’ comes to rest, make both pendulums ‘A’ and ‘B’ to oscillate simultaneously. It is found that pendulum ‘A’ comes to earlier than pendulum ‘B’ due to elastic fatigue.

Let us consider a body which is subjected to a uniformly increasing stress. Due to the application of stress, the change in dimension of the body takes place i.e the strain is developed. If we plot a graph between stress and strain we get a curve as shown in the figure and called STRESS-STRAIN diagram. 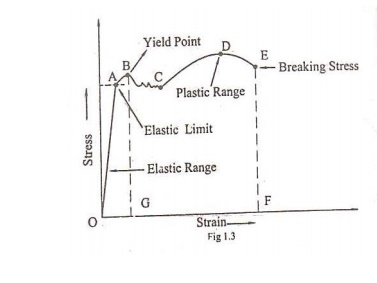 5.                 After this, the body will not come to its original state and the body acquires a permanent residual strain and it breaks down at a point called a breaking stress indicated by dotted line EF.