Types of Risks in Investment

Personal Risks: This category of risk deals with the personal level of investing. The investor is likely to have more control over this type of risk compared to others.

This category of risk deals with the personal level of investing. The investor is likely to have more control over this type of risk compared to others.

Tenure risk is the risk of losing money while holding onto a security. During the period of holding, markets may go down, inflation may worsen, or a company may go bankrupt. There is always the possibility of loss on the company-wide level, too.

There are two common risks on the company-wide level. The first, financial risk is the danger that a corporation will not be able to repay its debts. This has a great affect on its bonds, which finance the company's assets. The more assets financed by debts (i.e., bonds and money market instruments), the greater the risk. Studying financial risk involves looking at a company's management, its leadership style, and its credit history.

Management risk is the risk that a company's management may run the company so poorly that it is unable to grow in value or pay dividends to its shareholders. This greatly affects the value of its stock and the attractiveness of all the securities it issues to investors.

Fluctuation in the market as a whole may be caused by the following risks:

Market risk is the chance that the entire market will decline, thus affecting the prices and values of securities. Market risk, in turn, is influenced by outside factors such as embargoes and interest rate changes. See Political risk below.

Liquidity risk is the risk that an investment, when converted to cash, will experience loss in its value. When you want to sell the stock you are currently holding, there is nobody there to buy your stock, meaning that there is no volume in that stock.

Interest rate risk is the risk that interest rates will rise, resulting in a current investment's loss of value. A bondholder, for example, may hold a bond earning 6% interest and then see rates on that type of bond climb to 7%.

Inflation risk is the danger that the dollars one invests will buy less in the future because prices of consumer goods rise. When the rate of inflation rises, investments have less purchasing power. This is especially true with investments that earn fixed rates of return. As long as they are held at constant rates, they are threatened by inflation. Inflation risk is tied to interest rate risk, because interest rates often rise to compensate for inflation. Return of investment (ROI) is less than the market inflation rate. e.g. Return of investment (ROI) : 5%; Market Inflation rate (IR) : 8.5%

Exchange rate risk is the chance that a nation's currency will lose value when exchanged for foreign currencies.

Reinvestment risk is the danger that reinvested money will fetch returns lower than those earned before reinvestment. Individuals with dividend-reinvestment plans are a group subject to this risk. Bondholders are another.

Economic risk is the danger that the economy as a whole will perform poorly. When the whole economy experiences a downturn, it affects stock prices, the job market, and the prices of consumer products.

Industry risk is the chance that a specific industry will perform poorly. When problems plague one industry, they affect the individual businesses involved as well as the securities issued by those businesses. They may also cross over into other industries. For example, after a national downturn in auto sales, the steel industry may suffer financially.

Tax risk is the danger that rising taxes will make investing less attractive. In general, nations with relatively low tax rates, such as the United States, are popular places for entrepreneurial activities. Businesses that are taxed heavily have less money available for research, expansion, and even dividend payments. Taxes are also levied on capital gains, dividends and interest. Investors continually seek investments that provide the greatest net after-tax returns.

Political risk is the danger that government legislation will have an adverse affect on investment. This can be in the form of high taxes, prohibitive licensing, or the appointment of individuals whose policies interfere with investment growth. Political risks include wars, changes in government leadership, and politically motivated embargoes.

The speculators buy securities with a hope to sell them at a profit in future. They do not retain their holdings for a longer period. They buy the securities with the object of selling them and not to retain them. They are interested only in price differentials. They are not genuine investors.

Differences between investors and speculators: 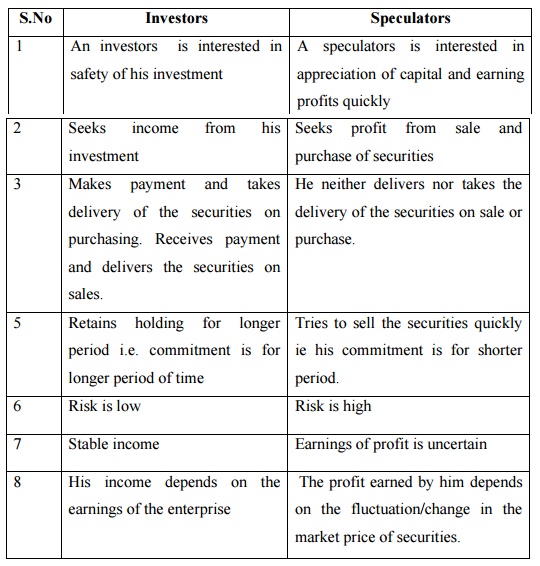 1 An investors is interested in safety of his investment

2 Seeks income from his investment

7 His income depends on the earnings of the enterprise

2 Seeks profit from sale and purchase of securities

3 He neither delivers nor takes the delivery of the securities on sale or purchase.

4 Tries to sell the securities quickly ie his commitment is for shorter period.

6 Earnings of profit is uncertain

7 The profit earned by him depends on the fluctuation/change in the market price of securities.

Speculation refers to the buying and selling of securities in the hope of making a profit from expected change in the price of securities. Those who engage in such activity are known as speculators.

1.     It leads to smooth change and prevents wide fluctuations in security prices at different times and places

2.     Speculative activity and the resulting effect in the prices of securities provided a guidance to the public about the market situation.

Differences between speculation and gambling: 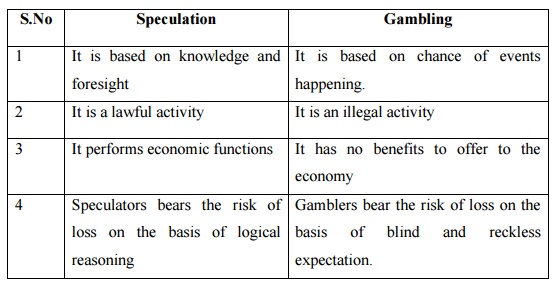 1 It is based on knowledge and foresight

2 It is a lawful activity

1 It is based on chance of events happening.

2 It is an illegal activity

3 It has no benefits to offer to the economy

4 Gamblers bear the risk of loss on the basis of blind and reckless expectation.