Types of Representation/ Reservation of Constituencies

Types of Representation/ Reservation of Constituencies

What are Plurality / Majority Systems? The principle of plurality/ majority system is simple. After votes have been cast and totalled, those candidates or parties with the most votes are declared the winners. However, the way this is achieved in practice varies widely. Five types of plurality/majority systems can be identified.

The First Past The Post system is the simplest form of plurality/majority system, using single member districts and candidate-centered voting. FTPT systems are found primarily in the UK and those countries historically influenced by Britain. Along with the UK, the other countries are Canada, India and the USA. FPTP is also used by a number of Caribbean countries, Bangladesh, Burma, India, Malaysia, Nepal and small island countries of the South Pacific.

The Block Vote is often applauded for retaining the voter’s ability to vote for individual candidates and allowing for reasonably-organized geographical districts while at the same time, increasing the role of political parties compared with FPTP and strengthening those parties which demonstrate most coherence and organizational structure.

PBV is simple to use, encourages strong parties and allows for parties to put up mixed slates of candidates in order to facilitate minority representation. It can be used to help to ensure balanced ethnic representation. Dijibouti, Singapore, Senegal, Tunisia use the PBV method.

This system enables voters to express their preferences between candidates rather than simply their first choice. Hence it is known as ‘Preferential Voting’. AV is used in Australia, Fiji and Papua Guinea. By transferring ballots, it enables the votes of several candidates to accumulate, so that diverse but related interests can be combined to win representation.

E. The Two- Round System (TRS)

The central feature of the Two-Round System is as the name suggests: it is not one election but takes place in two rounds, often a week or a fortnight apart. This system is used to elect national legislatures and are most common methods used worldwide for the direct election of Presidents. TRS is used by the Central African Republic, Congo, Gabon, Mali, Mauritania, Haiti, Iran, Vietnam, Tajikistan, Uzbekistan etc. 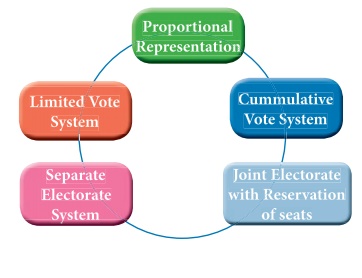 Is it good to have political competition?

What is our system of Elections?

Can we say that Indian elections are democratic? To answer this question, let us take a look at how elections are held regularly after every five years. After five years the term of all the elected representatives comes to an end. The Lok Sabha or Vidhan Sabha stands dissolved. Elections are held in all the constituencies at the same time, either on the same day or within a few days. This is called a general election. Sometimes election is held only for one constituency to fill the vacancy caused by death or resignation of a member. This is called By–Election.

You would have heard about the people of Tamilnadu electing 39 lok sabha MPs. You may have wondered how they did that. Did every person in Tamilnadu vote for all the 39 MPs? You perhaps know that this is not the case. In our country we follow an area based system of representation. The country is divided into different areas for the purpose of elections. These areas are called Electoral Constituencies. The voters who live in an area elect one representative.

Our Constitution entitles every citizen to elect its representative and to be elected as a representative. In an open electoral competition, certain weaker sections may not stand a good chance to get elected to the Lok Sabha and the State Legislative Assemblies. They may not have the required resources, education and contacts to contest and win elections against others.If that happens our Parliament and Assemblies would be deprived of a significant section of our population. That would make our democracy less representative and less democratic.

The division of each state into as many constituencies as in the Loksabha from that state and State Legislative Assemblies is done primarily on the basis of population census. As far as practicable, geographical area of constituencies were to be delimited taking into account physical features, existing boundaries of administrative units, facilities of communication and public convenience.

Once the constituencies are decided, the next step is to decide who can and who cannot vote. This decision cannot be left to anyone till the last day. In a democratic election, the list of those who are eligible to vote is prepared much before the election and given to everyone. This list is officially called the Electoral Roll or the Voters’ List.

This is an important step for, it is linked to the first condition of democratic election that everyone should get an equal opportunity to choose representatives irrespective of diﬀerences. In our country, all the citizens aged 18 years and above can vote in an election. Every citizen has the right to vote, regardless of his or her caste, religion or gender.

It is the responsibility of the government to get the names of all eligible voters put on the voters’ list. Names of those who move out of the place or those who are dead are deleted. A complete revision of list takes place every five years. In the last few years, a new system of Electoral Photo Identity Card (EPIC) has been introduced. The voters are required to carry this card when they go out to vote. Not compulsory, for voting, the voters can show many other proofs like the Aadhar Card, Ration card or Driving License.

 Notification of the Election

 Notification by the Election Commission regarding Nomination and withdrawal

 Filing of nomination papers by the intending candidates

 Verification and the acceptance or rejection of the nomination papers

Provisions Regarding Elections in India

In a democratic election the people should have a real choice. This happens only when there are no restrictions on anyone to contest an election. This is what our system provides. Anyone who can be a voter can also become a candidate in the elections. The only difference is that in order to be a candidate, the minimum age is 25 years, while it is only 18 years for being a voter. Political parties nominate their candidates who get the party symbol and support. Party’s nomination is often called as party ‘ticket’.

Every person who wishes to fill a ‘nomination form’ has to give some money as security deposit. According to the direction of the Supreme Court, every candidate has to make a legal declaration, giving full details of:

·        Educational qualifications of the candidate

This information has to be made public. This provides an opportunity to the voters to make their decision on the basis of the information provided by the candidates.

The main purpose of election is to give people a chance to choose the representatives, the government and the policies they prefer. Therefore it is necessary to have a free and open discussion about who is a better representative, which party will make a better government or what is a good policy. This is what happens during election campaigns.

In our country such campaigns take place for a two week period between the announcement of the final list of candidates and the date of polling. During this period the candidates approach their voters, political leaders address election meetings and political parties mobilise their supporters. This is also the period when newspapers, social media, televisions are full of election related stories and debates. Election campaign is not limited to these two weeks only. Political parties start preparing for elections months before they actually take place.

According to our election law, no party or candidate can:

v    Appeal to them in the name of caste or religion

If they do so, their election can be rejected by the court even after they have been declared elected. In addition to the laws, all the political parties in our country have agreed to a model Code of Conduct for election campaigns. According to this no party or candidate can:

·        Use any place of worship for election propaganda

·        Use government vehicles, aircrafts and officials for elections

·        Once elections are announced, Ministers shall not lay foundation stones of any projects, take any big policy decisions or make any promises of providing public facilities.