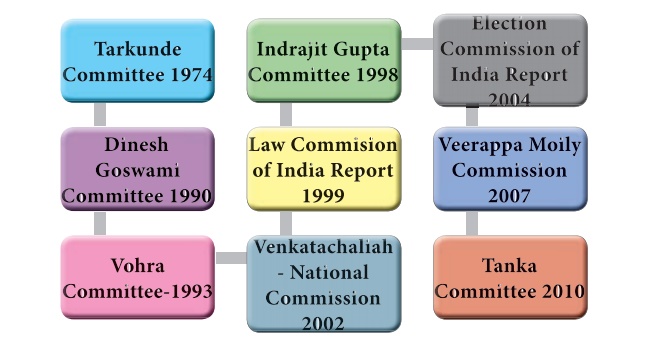 Based on the recommendations made by the above committees and commissions, various reforms have been introduced from time to time in our electoral system. Let us have a look at them. 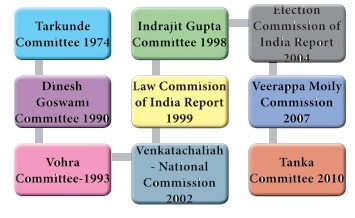 Based on the recommendations made by the above committees and commissions, various reforms have been introduced from time to time in our electoral system. Let us have a look at them.

v    Officers,   and   staff   engaged   in preparation, revision and correction of electoral rolls for elections to be on deputation to the Election commission.

v    Increase of number of proposers to 10% of the electors of the constituency or 10 electors, whichever is less.

v    In 1989, a provision was made to facilitate the use of electronic voting machines in elections.

v    In 1989, a provision was made for adjournment of poll in case of booth capturing.

v    Prohibition on the sale of liquor within a polling area during the period of 48 hours ending with the hour fixed for the conclusion of poll.

v    On the death of a contesting candidate, the party concerned would be given an option to propose another candidate within 7 days.

v    The registered voters are entitled for a paid holiday on the polling day.

v    In 1998 a provision was made whereby the employees of local authorities, nationalized banks, universities, LIC, government undertakings and other government aided institutions can be requisitioned for deployment on election day.

v In 1999, a provision was made for voting by certain classes of persons through postal ballot.

v In 2003, the facility to opt for voting through proxy was provided to the service voters belonging to the armed forces and members belonging to a force to which provisions of the Army Act apply.

v In 2003, the Election commission issued an order for the declaration of criminal antecedents, assets etc.

v    In 2003, Rajya Sabha elections were reformed by removing the domicile of the contesting candidate and further introduction of open ballot system was introduced.

v In 2003, an exemption of travelling expenditure from being included in the election expenses of the candidate was made.

v Free supply of electoral rolls by the government.

v In 2009, restrictions were imposed on conducting exit polls and publishing the results of exit polls.

v    In 2009, a provision was made for the disqualification of a person found guilty of corrupt practices which provided for a three month time limit within which the specified authority will have to submit the case of the person found to be guilty.

v    All officials have to be included in corrupt practice.

v    Appointment of appellate authorities within the district.

v    Voting rights to citizens of India living abroad were provided in 2010.

v    Ceiling on election expenditure was increased in 2011.

The 52nd Amendment Act of 1985 provided for the disqualification of the members of Parliament and the State legislatures on the ground of defection from one political party to another. For this purpose it added the Tenth Schedule to the Constitution. This act is often referred to as “Anti-defection law”. Later the 91st Amendment Act of 2003 made one change in the provision i.e., disqualification on ground of defection not to apply in case of split.

Provisions of the Act

A member of a house belonging to any political party becomes disqualified if he voluntarily gives up his membership or if he votes or abstains from voting contrary to any direction issued by his political party without obtaining prior permission of the party.

A nominated member of the house gets disqualified if he joins any political party after the expiry of six months from the date on which he takes his seat in the house.

Disqualifications on the ground of defection does not apply, if a member goes out of his party as a result of a merger of the party with another party; if a member, after being elected as the Presiding officer of the house, voluntarily gives up the membership of his party or rejoins after he ceases to hold that office.

Any question regarding disqualification arising out of defection is to be decided by the Presiding officer of the house.

The Presiding officer of a house is empowered to make rules to give effect to the provisions of the tenth schedule. All such rules must be placed before the house for 30 days. The house may approve or disapprove them. Further he may direct that any willful contravention by any member of such rules may be dealt with in the same manner as a breach of privilege of the house.

Evaluation of the Act

A. The tenth schedule of the constitution is designed to prevent the mischief of political defections motivated by the lure of office or material benefits

B. It is intended to strengthen the fabric of Indian Parliamentary democracy by curbing unprincipled and unethical political defections

C. It provides for greater stability in the body politic by checking the propensity of the legislators to change parties

D. It facilitates democratic realignment of parties in the legislature by way of merger of parties

E. It gives a clear cut constitutional recognition to the existence of political parties.

Let us learn about the Rajya

Transferable Vote System is followed for Rajya Sabha elections. Every state has a specific quota of seats in the Rajya Sabha. The members are elected by the respective State Legislative assemblies. The voters are the MLAs in that state. Every voter is required to rank candidates according to her or his preference. To be declared winner, a candidate must secure a minimum quota of votes, which is determined by a formula:

For example if 4 Rajya Sabha members have to be elected by the 200 MLAs in Tamilnadu, the winner would require (200/4+1=40+1) 41 votes. When the votes are counted, it is done on the basis of first preference votes secured by each candidate; If after the counting of all first preference votes, required number of candidates fail to fulfill the quota, the candidate who secured the lowest votes of first preference is eliminated and his/ her votes are transferred to those who are mentioned as second preference on those ballot papers. This process continues till the required number of candidates are declared elected.

Why did India adopt the FPTP System?

The answer is not very difficult to guess. If you have read carefully the method of election of Rajya Sabha members, you would have noticed that it is a very complicated system which may work in a small country but would be difficult to work in a sub-continental country like India. The reason for the popularity and success of the FPTP system is its simplicity. The entire election system is extremely simple to understand even for common voters who may have no specialized knowledge about politics and elections. There is also a clear choice presented to the voters at the time of elections. Voters have to simply endorse a candidate or a party while voting. Depending on the nature of actual politics, voters may either give greater importance to the party or to the candidate or balance the two.

The FPTP system offers voters a choice not simply between parties but specific candidates too. In other electoral systems, especially Proportional Representation Systems, voters are often asked to choose a party and the representatives are elected on the basis of party lists. As a result, there is no one representative who represents and is responsible for one locality. In constituency based system like the FPTP, the voters know who their own representative is and can hold him or her accountable. The FPTP system generally gives the largest party or coalition some extra bonus seats, more than their share of votes would allow.

Thus this system makes it possible for Parliamentary government to function smoothly and effectively by facilitating the formation of a stable government. The FPTP system encourages voters from different social groups to come together to win an election in a locality. The FPTP system has proved to be simple and familiar to ordinary voters.