Meaning and nature of Franchise and Representation

The right to vote in public elections. The word “Franchise” is of Anglo-French derivation-from Franc, meaning FREE.

Meaning and nature of Franchise and Representation

What is Franchise and Election?

The right to vote in public elections. The word “Franchise” is of Anglo-French derivation-from Franc, meaning FREE.

An election is the process of voting to choose someone to be their political leader or representative in government.

And what is Representation?

It is nothing but the action of speaking or acting on behalf of someone or the state of being so represented.

Part XV of the Indian Constitution titled “Elections” is of great importance. The constitution –makers had been anxious to safeguard this political right as an integral part of the constitution itself. It is for this important reason that the subject of elections has been accorded a constitutional recognition in our country.

Although elections were used in Ancient Athens, Rome and in the selection of Popes and Holy Roman Emperors, the origins of elections in the contemporary world was in the gradual emergence of representative government in Europe and North America which began in the 17th century. In a representative democracy elections are extremely important. Voting, in elections is the best way to make your voice heard. One fact that makes elections more important is when political parties try to suppress voting with the use of laws to disallow people to vote. Election and representation is the core for the formation of government. 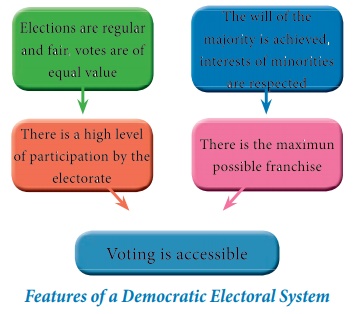 Why do we need Elections ?

Let us try to imagine a democracy without elections. A rule of the people is possible without any elections if all the people can sit together every day and take all the decisions. This is not possible in any large community nor it is possible for everyone to have the time and knowledge to take decisions in all matters. Let us presume that the people can resolve these difficulties and such a place do not require elections. In such case can we call this place a democracy?

In an election the voters make many choices:

v  They can choose who will make laws for them

v  They can choose the party whose policies will guide the government and law making.

What makes an Election Democratic?

v    There should be something to choose from parties and candidate should be free to contest elections and should offer some real choice to the voters.

v    The choice should be offered at regular intervals. Elections should be held regularly after every few years.

v    The candidate preferred by the people should get elected.

v    Elections should be conducted in a free and fair manner where people can choose as they really wish.

An election is a formal decision making process by which a population chooses an individual to hold public office. Elections fill offices in the legislatures, sometimes in the executive and judiciary and for regional and local government.