Tumors of the Kidney

Benign tumors of the kidney are as follows:

TUMORS OF THE KIDNEY

Benign tumors of the kidney are as follows:

•         Cortical adenomas are small, encapsulated cortical nodules measuring <3 cm; they are a common finding at autopsy. They may be composed of tubular or papillary structures. The papillary adenomas share the same chromosomal gains as papillary renal cell carcinoma.

•         Oncocytomas are large, benign tumors that are resected to rule out renal cell carcinoma when they are found incidentally on imaging studies. They are brown on cut surface and have abundant pink cytoplasm on microscopy. 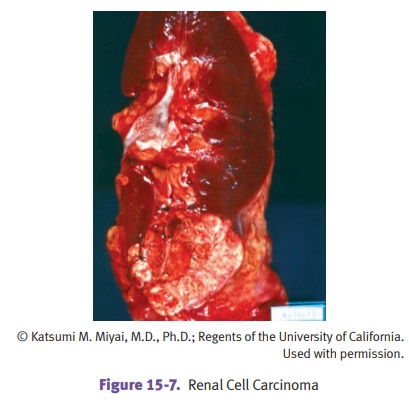 A variety of paraneoplastic syndromes from ectopic hormone production can occur:

Renal cell carcinoma may also cause secondary amyloidosis, a leukemoid reaction, or eosinophilia.

There is a high incidence of metastasis on initial presentation. The clinical course is unpredictable.

Gross examination typically demonstrates a large, solitary yellow mass found most commonly in the upper pole. Areas of necrosis and hemorrhage are commonly present. The tumor often invades the renal vein and may extend into the inferior vena cava and heart.

Histologic types of RCC are as follows:

•         A small percent occur in association with von Hippel-Lindau disease

•         Microscopically, there is an alveolar growth pattern with microcysts

•         Tumor is resistant to chemotherapy and radiotherapy

•         Microscopically, the papillae have a single layer of cells 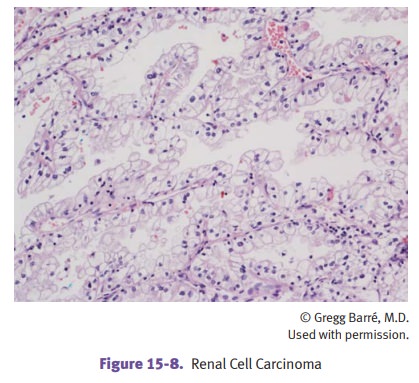 Patients with WAGR, DDS, or BWS syndrome are at increased risk of Wilms tumor.

•         Beckwith-Wiedemann syndrome (BWS) is an overgrowth disorder with char-acteristic features and an attendant increased risk of cancer.

Both WAGR and DDS are associated with deletions and mutations, respectively, of the WT1 gene. BWS arises through imprinting abnormalities at the WT2 locus.

Treatment is surgery, chemotherapy, and radiation, which as a combined therapy yields an excellent prognosis. Long-term survival rate is 90%.

Transitional cell carcinomas can involve the renal pelvis as well as the urinary bladder.