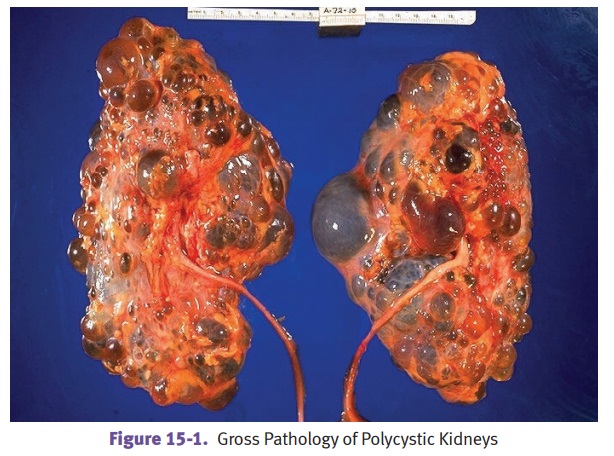 The kidneys are bilaterally enlarged and have a spongelike cut surface. The liver may have multiple hepatic cysts and cirrhosis may develop in childhood. Pulmonary hypoplasia is present to varying degrees

Clinically, patients are asymptomatic with normal renal function until middle age, and then present with renal insufficiency, renal stones, hematuria, and hypertension or with abdominal masses and flank pain. Diagnosis is established with U/S and CT scan. Most patients develop end-stage renal failure by decade 7.

On gross pathologic examination, the kidneys have massive bilateral enlargement with large bulging cysts filled with serous, turbid, or hemorrhagic fluid. Microscopic examination shows functioning nephrons present between the cysts; the cysts arise from the tubular epithelial cells of the kidney.

Extrarenal manifestations include cysts of the liver, pancreas, and lungs; berry aneu-rysms of the circle of Willis; mitral valve prolapse; and colonic diverticula. 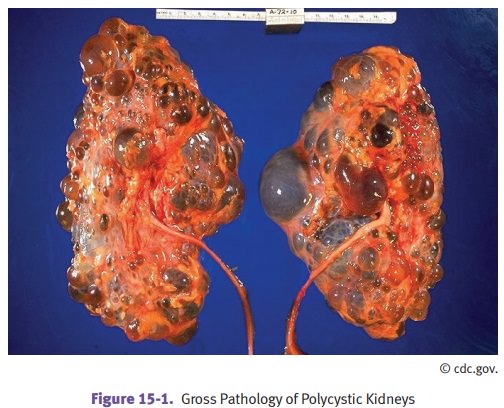 Renal dysplasia is the most common renal cystic disease in children, in whom it causes an enlarged renal mass with cartilage and immature collecting ducts. It may progress clinically to renal failure.

Acquired polycystic disease is seen in renal dialysis patients and is associated with a small risk of developing renal adenomas and renal cell carcinoma.

Simple retention cysts of the kidney are common in adults and occasionally cause hematuria.

•         Medullary sponge kidney can cause nephrolithiasis but is otherwise innocuous.

•         Nephronophthisis-medullary cystic disease complex presents as polyuria and polydipsia; it can progress to chronic renal failure in young adults. There are autosomal recessive forms. The cysts are in the cortex and the medulla.