Tubular reabsorption takes place from the renal tubules into the peritubular capillaries. In a 24-hour period, the kidneys form 150 to 180 liters of filtrate, and normal urinary output in that time is 1 to 2 liters.

Tubular reabsorption takes place from the renal tubules into the peritubular capillaries. In a 24-hour period, the kidneys form 150 to 180 liters of filtrate, and normal urinary output in that time is 1 to 2 liters. Therefore, it becomes apparent that most of the renal filtrate does not become urine. Approximately 99% of the filtrate is reabsorbed back into the blood in the peritubular capillaries. Only about 1% of the filtrate will enter the renal pelvis as urine.

Figure 18–4. Schematic representation of glomerular filtration, tubular reabsorption, and tubular secretion. The renal tubule has been uncoiled, and the peritubular capillaries are shown adjacent to the tubule.

QUESTION: Describe tubular secretion; that is, it goes from where to where? What sub-stances may be secreted?

For many of these substances, the renal tubules have a threshold level of reabsorption. This means that there is a limit to how much the tubules can remove from the filtrate. For example, if the filtrate level of glucose is normal (reflecting a normal blood glucose level), the tubules will reabsorb all of the glucose, and none will be found in the urine.

The hormone aldosterone, secreted by the adre-nal cortex, increases the reabsorption of Na+ ions and the excretion of K+ ions. Besides regulating the blood levels of sodium and potassium, aldosterone also affects the volume of blood.

2. Passive transport—many of the negative ions that are returned to the blood are reabsorbed following the reabsorption of positive ions, because unlike charges attract.

4. Pinocytosis—small proteins are too large to be reabsorbed by active transport. They become adsorbed to the membranes of the cells of the prox-imal convoluted tubules. The cell membrane then sinks inward and folds around the protein to take it in (see Fig. 3–3 for depictions of this and the other transport mechanisms). Normally all proteins in the filtrate are reabsorbed; none is found in urine. 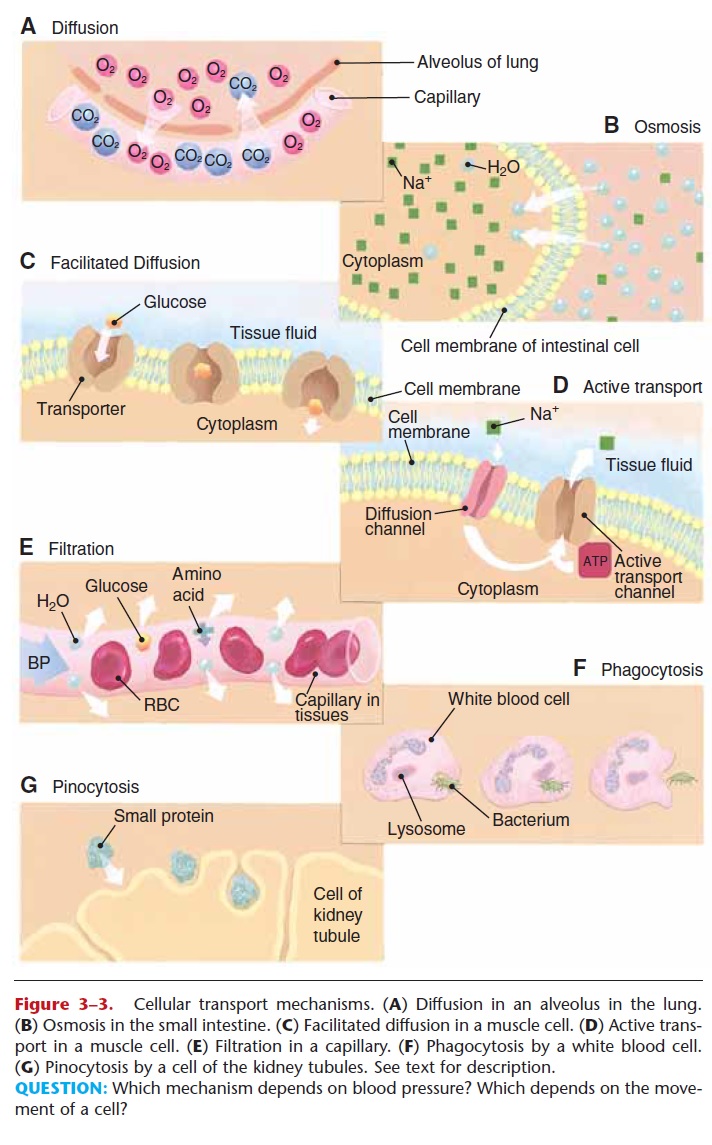