The blood pressure in the glomeruli, compared with that in other capillaries, is relatively high, about 60 mmHg. The pressure in Bowman’s capsule is very low, and its inner, podocyte layer is very permeable, so that approximately 20% to 25% of the blood that enters glomeruli becomes renal filtrate in Bowman’s capsules. The blood cells and larger proteins are too large to be forced out of the glomeruli, so they remain in the blood. Waste products are dissolved in blood plasma, so they pass into the renal filtrate. Useful materials such as nutrients and minerals are also dis-solved in plasma and are also present in renal filtrate. Filtration is not selective with respect to usefulness; it is selective only with respect to size. Therefore, renal filtrate is very much like blood plasma, except that there is far less protein and no blood cells are present.

The glomerular filtration rate (GFR) is the amount of renal filtrate formed by the kidneys in 1 minute, and averages 100 to 125 mL per minute. GFR may be altered if the rate of blood flow through the kidney changes.

Tubular reabsorption takes place from the renal tubules into the peritubular capillaries. In a 24-hour period, the kidneys form 150 to 180 liters of filtrate, and normal urinary output in that time is 1 to 2 liters. Therefore, it becomes apparent that most of the renal filtrate does not become urine. Approximately 99% of the filtrate is reabsorbed back into the blood in the peritubular capillaries. Only about 1% of the filtrate will enter the renal pelvis as urine. 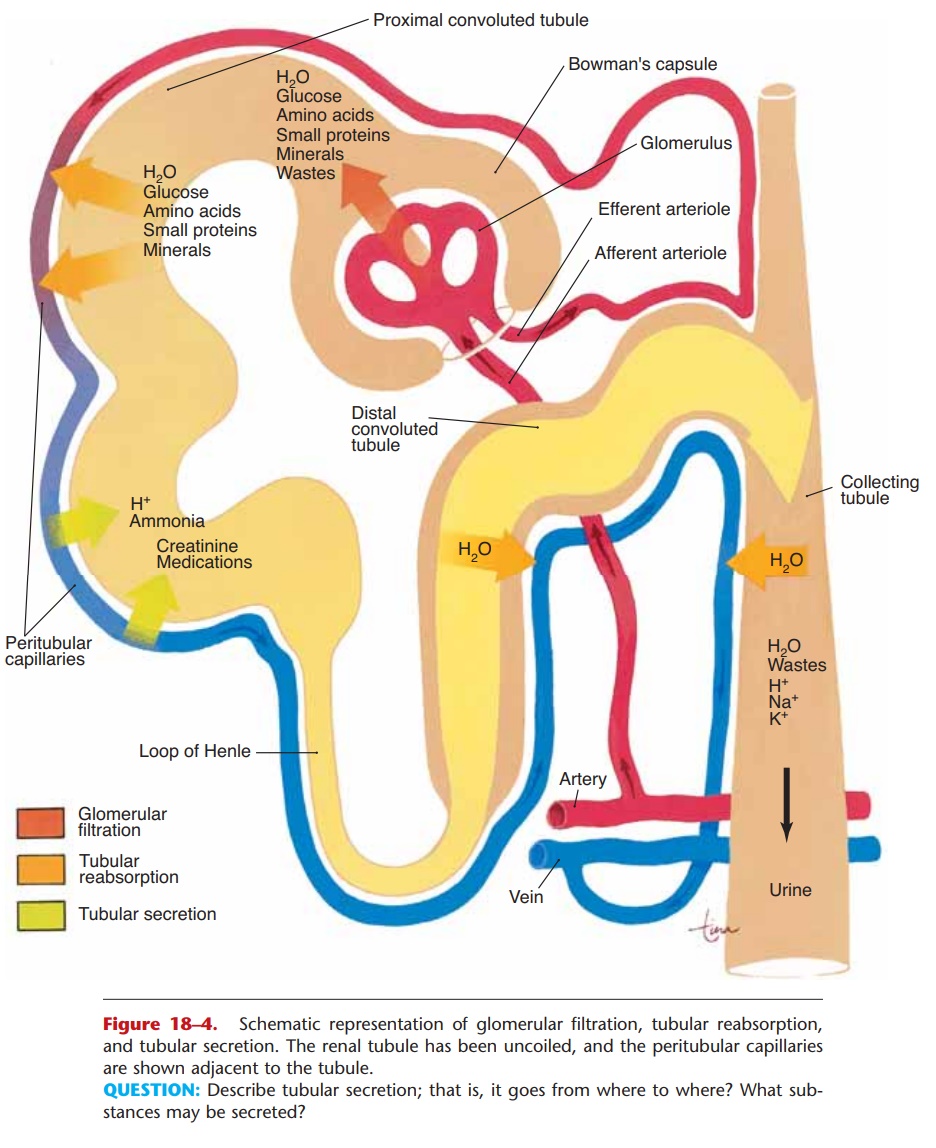 Figure 18–4. Schematic representation of glomerular filtration, tubular reabsorption, and tubular secretion. The renal tubule has been uncoiled, and the peritubular capillaries are shown adjacent to the tubule.

QUESTION: Describe tubular secretion; that is, it goes from where to where? What sub-stances may be secreted?

For many of these substances, the renal tubules have a threshold level of reabsorption. This means that there is a limit to how much the tubules can remove from the filtrate. For example, if the filtrate level of glucose is normal (reflecting a normal blood glucose level), the tubules will reabsorb all of the glucose, and none will be found in the urine.

The hormone aldosterone, secreted by the adre-nal cortex, increases the reabsorption of Na+ ions and the excretion of K+ ions. Besides regulating the blood levels of sodium and potassium, aldosterone also affects the volume of blood.

2. Passive transport—many of the negative ions that are returned to the blood are reabsorbed following the reabsorption of positive ions, because unlike charges attract.

4. Pinocytosis—small proteins are too large to be reabsorbed by active transport. They become adsorbed to the membranes of the cells of the prox-imal convoluted tubules. The cell membrane then sinks inward and folds around the protein to take it in (see Fig. 3–3 for depictions of this and the other transport mechanisms). Normally all proteins in the filtrate are reabsorbed; none is found in urine.

This mechanism also changes the composition of urine. In tubular secretion, substances are actively secreted from the blood in the peritubular capillaries into the filtrate in the renal tubules. Waste products, such as ammonia and some creatinine, and the meta-bolic products of medications may be secreted into the filtrate to be eliminated in urine. Hydrogen ions (H+) may be secreted by the tubule cells to help maintain the normal pH of blood.

HORMONES THAT INFLUENCE REABSORPTION OF WATER

Aldosterone is secreted by the adrenal cortex in re-sponse to a high blood potassium level, to a low blood sodium level, or to a decrease in blood pressure. When aldosterone stimulates the reabsorption of Na+ ions, water follows from the filtrate back to the blood. This helps maintain normal blood volume and blood pres-sure.

You may recall that the antagonist to aldosterone is atrial natriuretic peptide (ANP), which is secreted by the atria of the heart when the atrial walls are stretched by high blood pressure or greater blood vol-ume. ANP decreases the reabsorption of Na+ ions by the kidneys; these remain in the filtrate, as does water, and are excreted. By increasing the elimination of sodium and water, ANP lowers blood volume and blood pressure.

Antidiuretic hormone (ADH) is released by the posterior pituitary gland when the amount of water in the body decreases. Under the influence of ADH, the distal convoluted tubules and collecting tubules are able to reabsorb more water from the renal filtrate. This helps maintain normal blood volume and blood pressure, and also permits the kidneys to produce urine that is more concentrated than body fluids. Producing a concentrated urine is essential to prevent excessive water loss while still excreting all the sub-stances that must be eliminated.

If the amount of water in the body increases, how-ever, the secretion of ADH diminishes, and the kid-neys will reabsorb less water. Urine then becomes dilute, and water is eliminated until its concentration in the body returns to normal. This may occur follow-ing ingestion of excessive quantities of fluids.

The kidneys form urine from blood plasma. Blood flow through the kidneys is a major factor in deter-mining urinary output.

Glomerular filtration is the first step in urine for-mation. Filtration is not selective in terms of use-fulness of materials; it is selective only in terms of size. High blood pressure in the glomeruli forces plasma, dissolved materials, and small proteins into Bowman’s capsules; the fluid is now called renal filtrate.

Reabsorption takes place from the filtrate in the renal tubules to the blood in the peritubular capil-laries.

Tubular secretion takes place from the blood in the peritubular capillaries to the filtrate in the renal tubules and can ensure that wastes such as creati-nine or excess H+ ions are actively put into the fil-trate to be excreted.

Hormones such as aldosterone, ANP, and ADH influence the reabsorption of water and help main-tain normal blood volume and blood pressure. The secretion of ADH determines whether a concen-trated or dilute urine will be formed.

Waste products remain in the renal filtrate and are excreted in urine. The effects of hormones on the kidneys are summarized in Table 18–1 and illus-trated in Fig. 18–5. 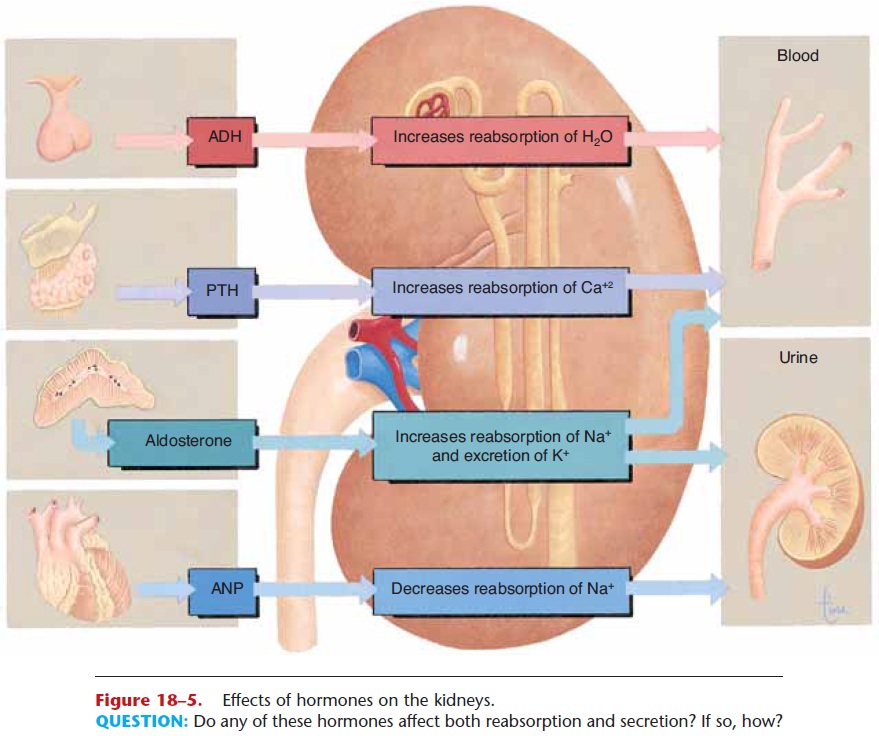 Figure 18–5. Effects of hormones on the kidneys.

QUESTION: Do any of these hormones affect both reabsorption and secretion? If so, how?