The kidneys are the organs most responsible for main-taining the pH of blood and tissue fluid within normal ranges.

THE KIDNEYS AND ACID–BASE BALANCE

The kidneys are the organs most responsible for main-taining the pH of blood and tissue fluid within normal ranges. They have the greatest ability to compensate for the pH changes that are a normal part of body metabolism or the result of disease, and to make the necessary corrections.

This regulatory function of the kidneys is complex, but at its simplest it may be described as follows. If body fluids are becoming too acidic, the kidneys will secrete more H+ ions into the renal filtrate and will return more HCO32 ions to the blood. This will help raise the pH of the blood back to normal. The reac-tions involved in such a mechanism are shown in Fig. 18–6, to which we will return later. First, however, let us briefly consider how the kidneys will compensate for body fluids that are becoming too alkaline. You might expect the kidneys to do just the opposite of what was just described, and that is just what happens. The kidneys will return H+ions to the blood and excrete HCO32 ions in urine. This will help lower the pH of the blood back to normal. 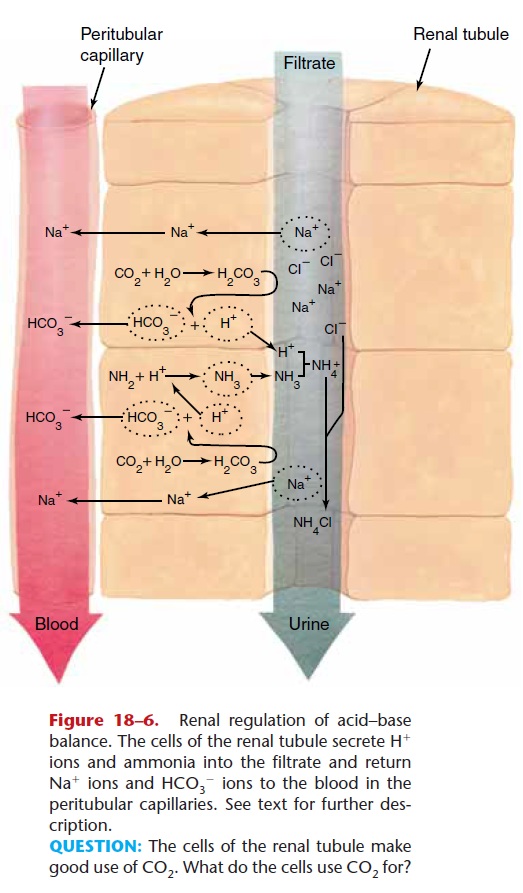 Figure 18–6. Renal regulation of acid–base balance. The cells of the renal tubule secrete H+ ions and ammonia into the filtrate and return Na+ ions and HCO32ions to the blood in the peritubular capillaries. See text for further des-cription.

QUESTION: The cells of the renal tubule make good use of CO2. What do the cells use CO2 for?

Because the natural tendency is for body fluids to become more acidic, let us look at the pH-raising mechanism in more detail (see Fig. 18–6). The cells of the renal tubules can secrete H+ ions or ammonia in exchange for Na+ ions and, by doing so, influence the reabsorption of other ions. Hydrogen ions are obtained from the reaction of CO2 and water (or other processes). An amine group from an amino acid is combined with an H+ ion to form ammonia.

The tubule cell secretes the H+ ion and the ammo-nia into the renal filtrate, and two Na+ ions are reab-sorbed in exchange. In the filtrate, the H+ ion and ammonia form NH41 (an ammonium radical), which reacts with a chloride ion (Cl2) to form NH4Cl (ammonium chloride) that is excreted in urine.

Another mechanism used by the cells of the kidney tubules to regulate pH is the phosphate buffer system.